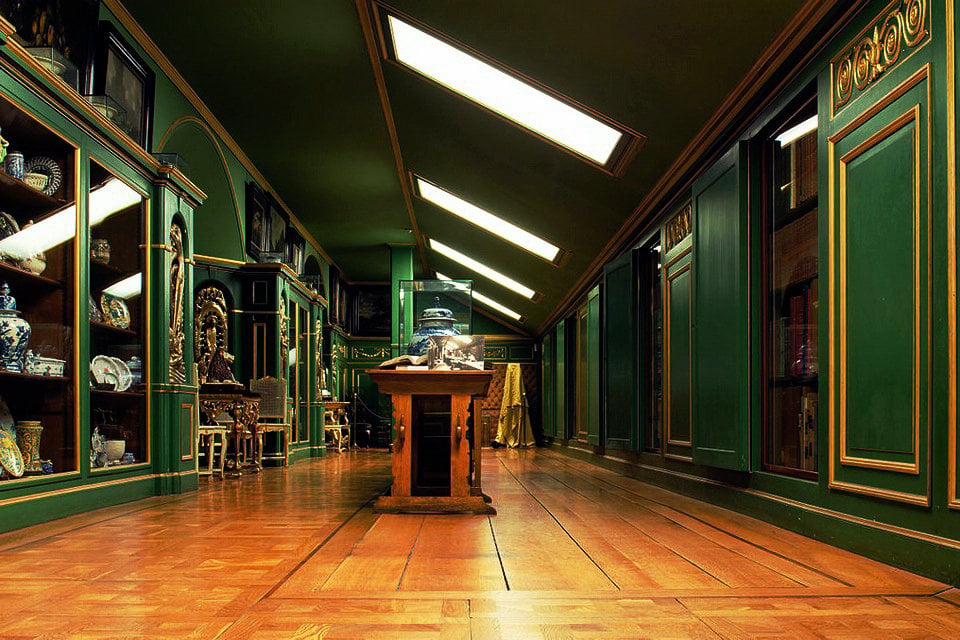 From the beginning, the attic was a regular breeze, but among other things to accommodate the growing number of paintings was furnished in 1905. In addition to a picture gallery, a skating rink and a training room were also built for the Countess and her physiotherapist.

The Tables Gallery （Level 6）
The picture gallery was made as an overhead light room with large light inlets of daylight in the ceiling. Today there is electric lighting in the light inputs. The ceiling was painted by Nils Asplund , a trompe l’œil of gold bars against a green background. In particular, paintings from the Dutch Golden Age were hung by painters such as Frans Hals , Pieter Brueghel , Pieter Aertsen and Frans Floris . Here also hangs a painting that was bought in the belief that it was a Rembrandt . It was the single most expensive item in the collection and was purchased for SEK 60,000 . Subsequent investigations have shown that the painting is painted in the 18th or 19th centuries, something the Countess never became aware of. The paintings all have a black frame and were hung tightly on the green glazed walls. Today the walls are bleached and the laser can only be seen, but it is visible behind the paintings.

The skating rink
A few steps up, along the picture gallery runs a skating rink. The skating rink was used extensively by the count’s daughter’s son, Rolf de Maré , who lived at Hallwylska palace for extended periods in his youth. At the cones there was a recess in the side where a person could sit in disguise and then set up the cones. The globe was rolled back in a hidden gutter that ran behind one wall to a recess at the tee where the globe gathered. Later, the skating rink was also filled with stands and collection objects, but the skating rink is still intact.

The gym room
In 1920, a room was furnished inside, on the short side of, the Tavelgalleriet as a gymnasium room. Later, it was also filled with display cabinets and booths for silver, glass and ceramics. The tools have been preserved and behind the collections are visible ribs and Roman rings.

The house was built as a Stockholm residence for Walther and Wilhelmina von Hallwyl after drawings by Isak Gustaf Clason and his colleague Albert Collett. The couple moved into the newly erected building in 1898.

Wilhelmina von Hallwyl had acquired large collections of art, antiques, weapons, porcelain and silver and decided early on to preserve his home as a museum. The Hallwilian collection comprises over 50,000 well-documented objects. The makers of Hallwyl inherited in 1920 the palace and equipment for the Swedish state. The museum was opened to the public in 1938. The museum was part of the authority Livrustkammaren and Skokloster’s castle with the Foundation Hallwylska museum between 1978 and 2017. Since the turn of the year 2017/2018 it has been included in the authority the State Historical Museums.