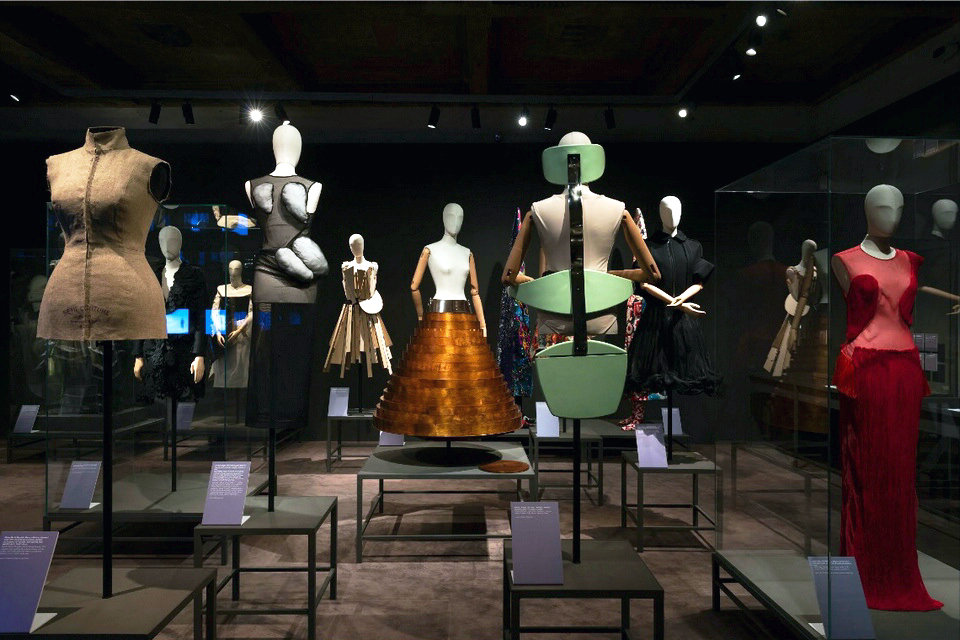 The boundaries between art and fashion, Across art and Fashion, Salvatore Ferragamo Museum

The boundaries between art and fashion became less clear in the Eighties, when the forms of relationship between the two worlds grew on an International level. Art institutions opened their doors to designers, such as the Metropolitan A new category of exhibition curators and dedicated museums emerged.

While art galleries and auction houses paid more and more attention to the phenomenon, major fashion designers created spaces specifically devoted to art exhibitions and funded shows and artwork around the world, contributing to their growing fame.

In turn, artists have collaborated with fashion for the most varied and complex reasons: from simple financial considerations to the desire for popularity, from personal relations to curiosity, and from the grand project of a total work of art to a revolutionary utopia.

Andy Warhol communication strategies.
Many times the artists have worked for the communication of fashion, as designers for magazines, as illustrators of advertising catalogs. A striking example of this symbiosis between the world of art and fashion is Andy Warhol.

Warhol was born with fashion since the early 1950s he had been a designer and advertising for “Glamor”, “Vogue” and “Harper’s Bazaar”, creating shoes with a thin and elegant line. In this section some pages published in the fashion magazines of those years will be exhibited that show his first tests as a fashion illustrator. Warhol directed an “Interview” magazine, reproduced here in eighteen issues, which acted as a trade union between the world of art and that of fashion.

With his presence on the New York cultural scene, at parties, vernissages, retrospectives and fashion shows, he shaped the relationship between art, fashion and celebrities that we know today. This concept is represented by a series of photographic shots depicting Warhol in different moments of New York social life and by the famous installation Altered Image by Christopher Makos.

What is certain is that in his projects, Andy Warhol has disseminated high-impact aesthetic inputs with an often irreverent nature. The most striking example is “The Souper Dress” which is presented in the exhibition, a concentrate of fashion, art and industrial logic. It is a paper, cellulose and cotton dress produced in the 1960s with the motif of the famous Campbell Soup, a repeated image in sequence, printed in silk-screen printing from the can of the soup.

Germana Marucelli.
Rare interpreter of poetry. If Ferragamo’s atelier represents the workshop of the Renaissance artist-craftsman, where the technical mastery that went hand in hand with creativity is fundamental, Germana Marucelli’s atelier of the sixties is the meeting place between operators of the fashion, artists and intellectuals united in the search for new expressive forms capable of interpreting their time. The section reproduces the Marucelli atelier-salon hosting the original works of art by Pietro Zuffi, Getulio Alviani, Paolo Scheggi that were exhibited on the walls and the clothes, which were the result of the partnership with these artists. Enriched by documents, photographs, promotional brochures and publications, this part of the exhibition also documents the years preceding this moment, the post-war period, when the seamstress established the San Babila poetry prize and her salon was frequented every Thursday by writers and poets , including the major representatives of twentieth century Italian poetry, Ungaretti, Quasimodo and Montale.

From the atelier to the mood board.
This section shows how the imagery of fashion designers is increasingly a storytelling through images that emerges from the flow of information, trying to stimulate two qualities such as attention and memory in the public. Created with the magazine “A MAGAZINE CURATED BY”, an immersive space welcomes the public and projects it into the visual and imaginative universe of exceptional creative minds. The world of Haider Ackermann, Martin Margiela, Yohji Yamamoto, Iris van Herpen, Dries van Noten, Giambattista Valli, Stephen Jones, Rodarte, Jun Takahashi, Kris van Assche, Martine Sitbon, Proenza Schouler, Riccardo Tisci composes a kaleidoscope of art images , music, poetry and photography.

Yinka Shonibare.
That art can use fashion to shape its critical language is demonstrated by the work of the British artist of Nigerian origin, Yinka Shonibare. With his installations, filmic transpositions, he proposes a deep reflection on multiculturality, analyzing mainly the colonial question. The figures that animate his works are made up of dummies in theatrical and dramatic poses, dressed according to the styles taken from the paintings of the eighteenth and nineteenth centuries, but made with batik fabrics, of clear African descent.

Role-playing games.
Today the reflection on the art / fashion relationship should be aware that the dualism (two systems that scrutinize, sometimes dialogue, but remain separate) that has gone through the history of fashion of the last century is now out of date. Fashion like art questions its practices. The section through the work of a series of authors such as Hussein Chalayan, Martin Margiela, Viktor & Rolf, Helmut Lang, Nick Cave tells how today it is increasingly difficult to define and close different creative practices.

Across art and Fashion
is fashion art? A simple question conceals the complex universe of an articulated relationship that has long been investigated, but without arriving at a clear and unequivocal definition. This project analyses the forms of dialogue between these two worlds: reciprocal inspirations, overlaps and collaborations, from the experiences of the Pre-Raphaelites to those of Futurism, and from Surrealism to Radical Fashion. The exhibition itinerary focuses on the work of Salvatore Ferragamo, who was fascinated and inspired by the avant-garde art movements of the 20th century, on several ateliers of the Fifties and Sixties that were venues for studies and encounters, and on the advent of the culture of celebrities. It then examines the experimentation of the Nineties and goes on to ponder whether in the contemporary cultural industry we can still talk about two separate worlds or if we are instead dealing with a fluid interplay of roles.

This simple question hides the complex universe of an articulated relationship, which has been investigated for a long time over time, without ever reaching a clear or unambiguous definition. Fashion – for its need to be functional and therefore to refer concretely to real life, as well as for its link with craftsmanship and industry – seems to be far from the ideal of art pour arte, a concept that however, it was not always representative even of the art world. Andy Warhol taught us that the uniqueness of the work of art no longer coincides with the artistic production and today the exhibitions of fashion designers proliferate and stylists welcome the practices of contemporary art with availability. Is it still possible, in this context, to speak of the dichotomy between art and fashion as happened in the last century?

This project analyzes the forms of dialogue between these two worlds: contaminations, overlaps and collaborations. From the experiences of the Pre-Raphaelites to those of Futurism, from Surrealism to Radical Fashion. The path focuses on the work of Salvatore Ferragamo, fascinated and inspired by the artistic avant-garde of the twentieth century; on some ateliers of the fifties and sixties, a place of study and meetings, and on the birth of the culture of celebrity, to continue with the experiments of the nineties and get to wonder if in the contemporary cultural industry we can still talk about two worlds distinct, or if instead we are faced with a fluid game of roles.

The peculiarity of the exhibition plan lies in the collaboration of several cultural institutions and in the location of the exhibition in various locations: in addition to the Salvatore Ferragamo Museum, promoter and organizer of the project together with the Ferragamo Foundation, they host the various exhibitions in Florence, the Central National Library, the Galleries degli Uffizi (Modern Art Gallery of Palazzo Pitti), the Marino Marini Museum and, in Prato, the Textile Museum

The institutions involved actively participated in the realization of the idea, with the aim of inviting a common reflection.

It is a tribute to the Salvatore Ferragamo Museum that curated and conceived the project and a symbol: on the one hand a decorative element, essential to the aesthetics of a 1958 model by Salvatore Ferragamo, the Tirassegno décolleté, and on the other a work by one of the great American artists of the second half of the twentieth century, Kenneth Noland, who was an inspiration.

The exhibition at the Salvatore Ferragamo Museum has four curators, Stefania Ricci, director of the Salvatore Ferragamo Museum, Maria Luisa Frisa, Enrica Morini, Alberto Salvadori, who with their different skills and personalities have collaborated day after day in the construction of the route, together with the directors and to the managers of the various institutions who participated in the initiative with enthusiasm and spirit of collaboration and to the authors of the catalog, who helped the curators in the final choice of the works, making available their knowledge and their professional experiences. There are many loans from the most prestigious public and private collections, national and international, which give the exhibition an international feel

The Ferragamo family founded the museum in May 1995 to acquaint an international audience with the artistic qualities of Salvatore Ferragamo and the role he played in the history of not only shoes but international fashion as well.

Like most corporate museums, Museo Salvatore Ferragamo and its archives stem from the vision of an entrepreneur, in this case Salvatore Ferragamo’s widow, Wanda, who has headed the company since the founder’s death in 1960, and her six children. In particular, the eldest of their children, Fiamma, who managed the company’s core footwear and leather goods business after her father’s death, stood at this project’s helm on behalf of her family and brought it to life, shaping its strategy with the assistance of historians and archivists.

The idea for the museum initially came about when an exhibition was organised at Palazzo Strozzi on the history of Salvatore Ferragamo. The exhibition went on tour and was hosted by some of the world’s most prestigious museums, such as the Victoria and Albert in London, the County Museum of Los Angeles, the New York Guggenheim, the Sogetsu Kai Foundation in Tokyo, and the Museo de Bellas Artes in Mexico. The temporary exhibition gradually became permanent.

In recognition of the museum’s cultural importance and that of its many initiatives over the years, in 1999, Salvatore Ferragamo received the Guggenheim Impresa e Cultura Award, given annually to companies that best invest in culture to constructive ends. The museum is located in the historical centre of Florence, in Palazzo Spini Ferroni, which has also been the company’s headquarters since 1938.