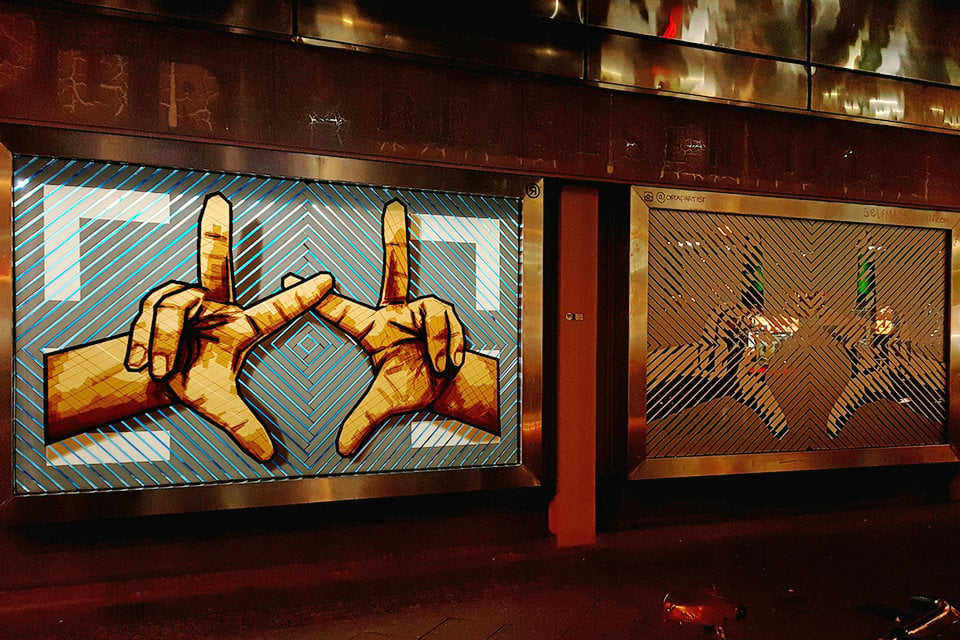 Tape art is an artwork created with adhesive tape such as duct tape or packing tape. It developed from urban art in the 1960s, as an alternative to the widely spread use of spray cans in the urban art scene. Tape can be used to produce a “stained glass” effect when applied to glass or plastic which is lit from behind. It can be attached to a wall to form the outline or an image, or can be shaped into three-dimensional sculptures.

Tape artists such as Max Zorn show their work at art fairs including Art Basel Miami.

History
Tape Art emerged from the search for an alternative to aerosol cans as a subcategory in urban-art in the 1960s. Mainly Tape Art was originally used in public urban space. Increasingly, tape art is discovered by the media and used by individuals in the private interior. After Tape Art was initially used by subversive individuals with the existing materials in public urban space, special artist tapes have now been developed.

El Bocho, an artist from Berlin, used the wall of the Stadtbad Wedding in 2009 as part of the exhibition “Urban Affairs Extended” exclusively with adhesive strips, causing a sensation. The Heyne art factory in Offenbach am Main opened the first group exhibition in Europe in early 2015, works by seven European tape artists and two collectives from Berlin were shown. Tape art artists, such as Max Zorn, are invited to renowned art fairs, such as the Art Basel Miami, with their projects. The Berlin-based Polish artist Monika Grzymala exhibits her three-dimensional installations worldwide in renowned galleries and museums, such as the Kunsthalle Hamburg or the Albertina in Vienna.

In October 2016, the first international Tape Art Convention – an exhibition in the Berlin gallery Neurotitan – was organized in Berlin. Alongside the German artist collective Tape That, well-known international artists such as Buff Diss, Slava Ostap, Benjamin Murphy and Max Zorn participated.

Characteristics
Tape art can be installed quickly and almost silently, making it suitable for small or temporary urban art projects. No masking or covering is necessary. Tape is relatively easy to handle, and can be applied to various surfaces, such as stone, asphalt, wood, aluminum, sandwich panels or glass. Interior installations work just as well as exterior ones.[dubious – discuss] Unlike spray paint art, tape art can be removed easily without leaving a permanent mark.

Materials for tape art vary depending on which tape is being used. Tape art can use duct tape, packing tape, masking tape or other products. Unlike traditional paintings and sculptures, tape art can be applied anywhere, including the doors, ceilings and floors of galleries. Duct tape can be used to construct three-dimensional sculptures.

Tape Art can be performed almost silently, quickly and without odor. The uncomplicated handling of graffiti makes Tape Art interesting for small or temporary urban art projects. Due to the material properties, protective measures such as masking or covering are not necessary. The relatively easy handling of the material allows Tape Art to become more and more interesting for private users as well. The fabric tapes can be processed on a variety of substrates, such as stone, asphalt, wood, aluminum dibond, cloth or glass. Another advantage over conventional graffiti is the redetachability of the material.

material
Since Tape Art is a free art form, in principle any material may be used. However, suitable materials have the following properties:

Often a tissue tape is used. In the meantime, materials with smooth surfaces are increasingly being used for filigree work in interiors. Special artist tapes are made in different widths in fashionable and eye-catching colors of different brands. Different varieties are used on different substrates. In general, surfaces should be as free of dust and grease as possible in order to ensure good adhesion of the adhesive tape.

Tape Art Variations
Due to the fact that adhesive tape is very versatile and flexibly applicable, it invites above all to experiment. For example, there are now a variety of people who make their purses or mobile phone cases individually from tape.

On an artistic level, there are above all interdisciplinary collaborations with artists from the graffiti scene. But also the combination with digital art forms is possible. Thus, a style has developed recently, which is referred to as tape mapping. It is the literal fusion of tape art and video mapping that animates the artwork of tape with visual effects.

Another tape art variation is the making of sculptures. Here, the adhesive tape is shaped and glued together to make 3D figures. Mostly for this so-called painter’s crepe, ie paper tape used.