The 18th century to a large extent continued to refine 17th-century formulae, and levels of production decreased. In the Rococo style floral decoration became far more common on porcelain, wallpaper, fabrics and carved wood furnishings, so that buyers preferred their paintings to have figures for a contrast. One change was a new enthusiasm among French painters, who now form a large proportion of the most notable artists, while the English remained content to import. Jean-Baptiste Chardin painted small and simple assemblies of food and objects in a most subtle style that both built on the Dutch Golden Age masters, and was to be very influential on 19th-century compositions. Dead game subjects continued to be popular, especially for hunting lodges; most specialists also painted live animal subjects. Jean-Baptiste Oudry combined superb renderings of the textures of fur and feather with simple backgrounds, often the plain white of a lime-washed larder wall, that showed them off to advantage. 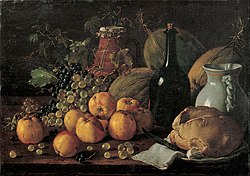 By the 18th century, in many cases, the religious and allegorical connotations of still-life paintings were dropped and kitchen table paintings evolved into calculated depictions of varied colour and form, displaying everyday foods. The French aristocracy employed artists to execute paintings of bounteous and extravagant still-life subjects that graced their dining table, also without the moralistic vanitas message of their Dutch predecessors. The Rococo love of artifice led to a rise in appreciation in France for trompe-l’œil (French: “trick the eye”) painting. Jean-Baptiste Chardin’s still-life paintings employ a variety of techniques from Dutch-style realism to softer harmonies.

The bulk of Anne Vallayer-Coster’s work was devoted to the language of still life as it had been developed in the course of the seventeenth and eighteenth centuries. During these centuries, the genre of still life was placed lowest on the hierarchical ladder. Vallayer-Coster had a way about her paintings that resulted in their attractiveness. It was the “bold, decorative lines of her compositions, the richness of her colours and simulated textures, and the feats of illusionism she achieved in depicting wide variety of objects, both natural and artificial” which drew in the attention of the Royal Académie and the numerous collectors who purchased her paintings. This interaction between art and nature was quite common in Dutch, Flemish and French still lifes. Her work reveals the clear influence of Jean-Baptiste-Siméon Chardin, as well as 17th-century Dutch masters, whose work has been far more highly valued, but what made Vallayer-Coster’s style stand out against the other still-life painters was her unique way of coalescing representational illusionism with decorative compositional structures.

The end of the eighteenth century and the fall of the French monarchy closed the doors on Vallayer-Coster’s still-life ‘era’ and opened them to her new style of florals. It has been argued that this was the highlight of her career and what she is best known for. However, it has also been argued that the flower paintings were futile to her career. Nevertheless, this collection contained floral studies in oil, watercolour and gouache.

With origins in the Middle Ages and Ancient Greco-Roman art, still-life painting emerged as a distinct genre and professional specialization in Western painting by the late 16th century, and has remained significant since then. A still-life form gives the artist more freedom in the arrangement of elements within a composition than do paintings of other types of subjects such as landscape or portraiture. Still life, as a particular genre, began with Netherlandish painting of the 16th and 17th centuries, and the English term still life derives from the Dutch word stilleven. Early still-life paintings, particularly before 1700, often contained religious and allegorical symbolism relating to the objects depicted. Some modern still-life work breaks the two-dimensional barrier and employs three-dimensional mixed media, and uses found objects, photography, computer graphics, as well as video and sound.

The term includes the painting of dead animals, especially game. Live ones are considered animal art, although in practice they were often painted from dead models. The still-life category also shares commonalities with zoological and especially botanical illustration, where there has been considerable overlap among artists. Generally a still life includes a fully depicted background, and puts aesthetic rather than illustrative concerns as primary.

Still life occupied the lowest rung of the hierarchy of genres, but has been extremely popular with buyers. As well as the independent still-life subject, still-life painting encompasses other types of painting with prominent still-life elements, usually symbolic, and “images that rely on a multitude of still-life elements ostensibly to reproduce a ‘slice of life'”. The trompe-l’œil painting, which intends to deceive the viewer into thinking the scene is real, is a specialized type of still life, usually showing inanimate and relatively flat objects.