The National Gallery of Denmark (Danish: Statens Museum for Kunst, also known as “SMK”, literally State Museum for Art) is the Danish national gallery, located in the centre of Copenhagen.

SMK has more than 700 years of art and art history. The museum holds about five special exhibitions a year, and free guided tours every Sunday for both children and adults. Seven Fridays a year, the museum holds SMK Fridays, where the opening hours are extended until 10 pm. 22, and SMK is the framework for informal art experiences with music, performances and art talks. 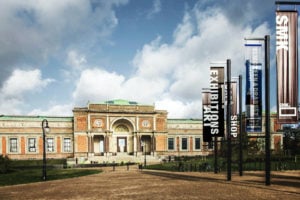 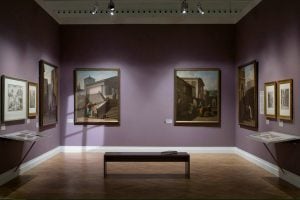 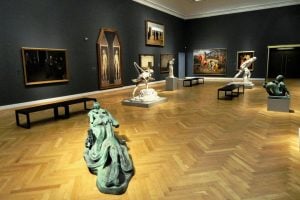 The museum collects, registers, maintains, researches and handles Danish and foreign art dating from the 14th century to the present day.

Collections
The museum’s collections constitute almost 9,000 paintings and sculptures, approximately 240,000 works of art on paper as well as more than 2,600 plaster casts of figures from ancient times, the middle-ages and the Renaissance. Most of the older objects come from the Danish royal collection. Approximately 40,000 pieces from the collections are expected to be made available online by 2020.

Permanent exhibitions
SMK’s permanent exhibitions provide an overview of 700 years of art with works by Mantegna, Cranach, Tizian, Rubens and Rembrandt, among others. SMK is part of an international movement among cultural heritage institutions to release digitized collections for free use and recycling. The move is called OpenGLAM.

The sections of the museum’s copyright-free collections are transferred to the public domain and are freely downloadable and used for any purpose.

European Art 1300–1800
The display of European Art 1300–1800 is a comprehensive collection of art over the 500-year period, featuring works by Mantegna, Cranach, Titian, Rubens and Rembrandt. The art is spread over thirteen rooms, and is the oldest art collection in Denmark, with a particular emphasis on Danish, Dutch, Flemish, Italian, French, Spanish and German pieces.

French Art 1900–1930
SMK gained its modern French art collection in 1928 when it was donated by the late collector Johannes Rump. This collection features some of the museum’s most famous pieces from artists such as Matisse, Picasso, Derain and Braque. The collection was first offered to the SMK by Rump in 1923, but was rejected by the director Karl Madsen, as he did not believe it to be of a high enough quality.

Danish and International Art After 1900
Housed in the museum’s 1993 extension, this 20th and 21st century collection is predominantly focused on the most important examples of modern Danish art. A long corridor of paintings looking onto Østre Anlæg park works as a chronological overview of the work from this period, whilst the smaller galleries focus on specific artists or movements.

The Royal Collection of Graphic Art
The Royal Collection of Graphic Art contains more than 240,000 works: copperprints, drawings, etchings, watercolours, lithographic works and other kinds of art on paper, dating from the 15th century to the present day. The beginnings of this collection were made around the time of Christian II. In his diary from 1521 the German painter Albrecht Dürer says he has given the King “the best pieces of all my prints”.

In 1843 the various works, which had so far been the king’s private collection, were displayed to the public. It was then moved into the Statens Museum for Kunst when the first building was completed in 1896, along with The Royal Collection of Paintings and The Royal Cast Collection.

Although the papers contain a great number of foreign works, Danish art constitutes the main part of the collection. This collection is open to the public through the Print Room, access to which must be booked in advance of arrival.

The Royal Cast Collection
The Royal Cast Collection is held at the West India Warehouse, Toldbodgade 40, between The Little Mermaid and Nyhavn in Copenhagen. It consists of over 2,000 naked plaster casts of statues and reliefs from collections, museums, temples, churches, and public places throughout the world, from antiquity to the Renaissance. The Royal Cast Collection is only open for special events. The art was first put on display in 1895 with the intention of edifying visitors about the progression of representations of the human form over time in parallel with growing social, political and aesthetic awareness in the Western world.

At the start of the Second World War the art of antiquity became increasingly unfashionable, associated with an archaic artistic tradition. In 1966, as abstract art became more popular, the Royal Cast Collection was removed to a barn outside Copenhagen for storage and only revived in 1984 when it was removed to the West India Warehouse.

History
The collections at the SMK have their origins in the Danish Kings’ Chamber of Art, which dates back to Christian II.

In 1721, when the Gothenburg collections were taken over, the collection acquired some valuable works. In this connection, the collection was very well equipped with particularly Flemish and Dutch art. Among Gothenburg’s works, many works by Lucas Cranach were the older one, which is why SMK today has the largest collection of Cranach works outside Germany.

Christiansborg’s first brand
At Christiansborg’s fire in 1794, part of the collection was lost, but most of it was saved thanks to Johan Conrad Spengler’s snare, as Spengler caused the guards to evacuate the paintings both at the castle and in the Chamber of Art. Among the burned works was Nicolai Abildgaard’s series of Danish royal portraits as well as a rider portrait of Christian IV (1642-43) by Karel van Mander III.

The Golden Age Period
Purchases continued, and during the 19th century, works were almost exclusively purchased by Danish artists, and SMK has a very rich collection of paintings from the Danish Golden Age. It was new that the country could create images of high artistic quality. This was a direct consequence of the establishment of the Royal Danish Academy of Fine Arts in 1754. In 1825 the Chamber of Art was closed down and the collections of art were opened to the public under the name of the Royal Painting Collection in 1827. By the abolition of monarchy in 1849, the art treasures became the property of the State.

Christiansborg’s second brand
By the second castle fire in 1884, virtually the entire painting collection survived. However, the collection became homeless again, and therefore, in 1888, an architectural competition was printed which led to the construction of the old part of the present building.

Rumps collection
Now the collections were expanded with generous donations and long-term loans. In 1928, politician Johannes Rump donated his large collection of early French modernist paintings to the museum. Rump’s collection includes works by André Derain, Georges Braque and Henri Matisse of exceptional quality and with world renown. The donation was followed by further purchases of paintings and sculptures by French artists.

Architecture
The museum is built in several stages. The Royal Collection of Paintings originally hung on Christiansborg Castle, from where the paintings were saved by the castle fire in 1884. The collection became homeless, so the need for a new building was urgent. An architectural competition was printed in 1888 and won by architects Vilhelm Dahlerup and Georg EW Møller. Møller was especially responsible for the technical solutions, including the concrete decks that are behind the facades.

The historicist museum building was erected from 1889 – 1896 on the remains of Peuckler’s Bastion and meets the street corner at an oblique angle and monumentally oriented to both Sølvgade and Øster Voldgade. The centerpiece of the symmetrical façade resembles a Roman triumphal arch, while the rest is inspired by Italian Renaissance. Unlike Dahlerup’s earlier works, the museum is made of “real” materials – bricks, granite and fax limestone. The vestibule was marked by a monumental marble staircase, adorned with sculptures. Originally, the ground floor was intended for the casting collection and the 1st floor for the painting collection. It wasn’t long before the castings were banished from the building due to lack of space.

Already in the 1920s, the first expansion plans appeared, but only in 1969 – 1970 stood the kgl. building inspector Nils Koppel for a drastic redevelopment of the interior, which provided ten new rooms and more space by looping the monumental main staircase. Instead, he placed a modern, space-saving staircase in the porch and pierced the wall of the banquet hall toward the park. At the same time, the decorative paintings and gilding in the ceiling of the vestibule were painted over, and the two courtyards were brought into rooms.

The most recent major extension to the museum was built following an architectural competition in 1992 – 1998 and was designed by architect Anna Maria Indrio of CF Møllers Tegnestue. The white, modernist wing is not built directly with the older building, but is positioned so that a long, high space, called the sculpture street, is interposed between the architecture of the two different times. On the same occasion, Koppel’s stairs and other details were also changed. The new extension contains a concert hall whose acoustics proved so poor that it later became the subject of a compensation claim.

Originally, there was an open front porch in front of the museum building so you could drive up to the main staircase, and the only green element was a circular lawn where the monument of Denmark throne in the building’s central axis. The monument was erected in 1897 by Louis Hasselriis in memory of Christian IX and Queen Louise’s golden wedding in 1892. In 1919, the triangular area between the museum, Sølvgade and Øster Voldgade was transformed into a park with roses in the formal French style, the Museum Garden, designed by city gardener Valdemar Fabricius Hansen. At the same time, the Monument to Denmark was removed and is today hidden away in the Østre Anlæg. The museum garden was restored in 1999.

On January 27, 2010, Museum Director Karsten Ohrt announced that the institution had received a donation from Annie and Otto Johs. Detlefs’ Funds of DKK 27.5 million kr., which have been invested in a complete redesign of the 7,500 m 2 large area in front of the museum. The newly renovated museum garden was inaugurated in September 2014.