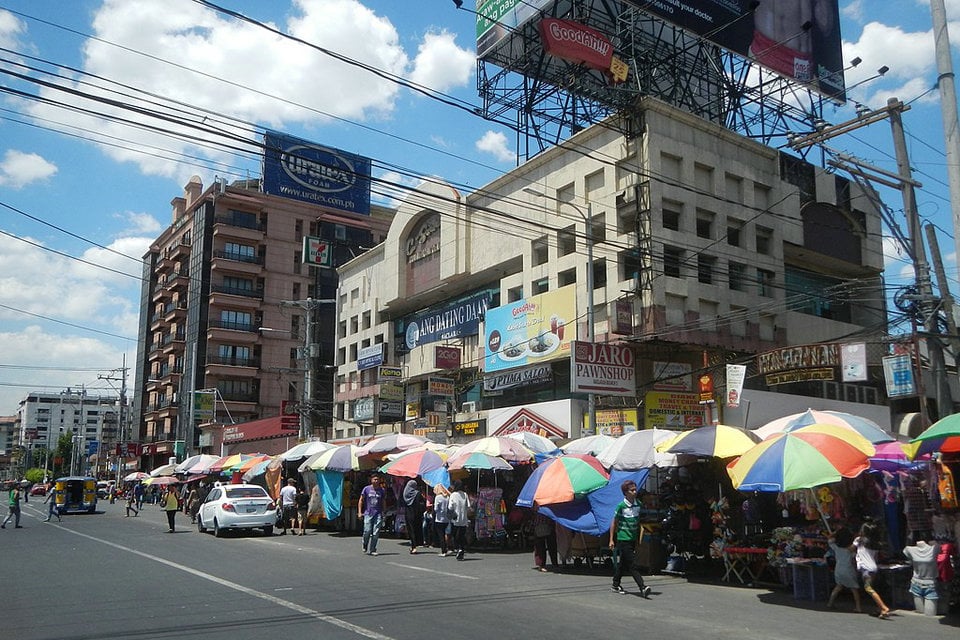 Shopping tourism in the Philippines

Shopping is part of a Filipino’s life, even things they don’t need but are on sale and discount they’ll buy it. The reason why the country wasn’t affected much by financial crisis of the early 21st century is because of the circulation of money. Even if Filipinos are broke they’ll find a way to buy something at least in a week for themselves.

In the Philippines, Metro Manila is a great place for shopping. It is the main shopping hub of the country and is home to an extensive range of shopping centers. Metro Manila offers different types of shopping centers which are scattered around the metropolis, from modern and glittery shopping malls to traditional and busy markets, its all in Metro Manila. The Philippines is one of the ideal destinations for bargain shopping. Here you can find cheaper items that are sold at flea markets (tiangge) and open markets like Divisoria, Market! Market! and Greenhills, these markets are definitely the right place for a shopper who seeks bargains and cheap buys. But if you prefer buying luxurious and expensive clothes, bags, watches and jewelery, then the Ayala Center would be the right place for you, here you can find a variety of high-end shopping centers. The place is often compared to Singapore’s Orchard Rd and Bangkok’s Siam Square. From entertainment to shopping, they have it all there. Not far from Makati is the Bonifacio Global City, it is one of the growing business and shopping districts of the metropolis. It is home to several shopping malls, including Serendra, it is a piazza that offers lifestyle and luxury shops and often called the luxury lifestyle center of Metro Manila. The piazza features modern architecture that will make you think you’re somewhere near the world of Star Wars. Stare, drool and be amazed at the public art displayed there. Coffee shops and tea shops are found around this area, as well as furniture and clothing stores.

A pasalubong is a tradition practiced by Filipinos for a long time. It is something you bring to your friends and family as a souvenir, keepsake or gift from a place you have visited. Filipino immigrants from abroad and Filipinos who work outside their hometowns but within the Philippines bring pasalubong or send them mostly during Christmas, New Year, Birthdays, Holy Week and during summer vacations. Try this tradition if you’re planning what to buy as a souvenir from the Philippines. Filipinos tend to be generous even with co-workers, friends, neighbours, their co-worker’s family, their friend’s friends and their neighbour’s neighbour. Try giving pasalubongs to your enemies and even to the meanest person. A Pasalubong consists the following: food (usually delicacies and sweets), T-shirts, souvenirs such as key chains, bags, etc. They usually put all their pasulubongs into one box. Get tips from locals for what a typical pasalubong consists of.

What to buy
Antiques: Antique porcelain plates are found around Manila after the Filipino-Chinese trade however be careful when you buy antiques. Antique Santos or statues of saints including Jesus and the Virgin Mary are also sold. Streets of Makati, Ermita and Vigan (in Ilocos) mostly sell antiques
Branded goods: Brand-name goods are sold in the Philippines at a price cheaper than in the West, but beware of the common knockoffs (the “class A” products) smuggled from China or produced by local factories creating all-bogus copies. Most designer goods stores have presence in the malls (and may have factories in the country), but this has not prevented some cheap bogus products that bypassed customs to make their way in the tiangge.
Brass ware: Muslim gongs, jewel boxes, brass beds are other brass ware products. Just like antiques, tourists are advised to be careful in purchasing brass ware.
Books and stationery: Filipino literature is amusing to read, English versions of Filipino novels are available in National Bookstore and Powerbooks, books tend to be much cheaper in the country compared to other countries. Stationery items are sold at a very low price as low as ₱10, however be careful as some items may contain high lead content, common on the dirt-cheap items sold in street markets.
Clothes: Bargain clothes as low as are available in flea markets and ukay-ukays. Ukay-ukays sell second-hand clothes from other countries at a cheap price. If you prefer branded clothes, Metro Manila has a lot of foreign brand shops scattered around the city predominantly in the business district of Makati.
Comics: Komiks or comics in English is one of the most popular forms of literature in the Philippines and can be bought as cheap as ₱10, but circulation is dwindling in the information age despite the very cheap price. Some comics have grew popular that TV and film adaptations are produced. Carlo J. Caparas and Mars Ravelo are two famous comic authors. They’re available in newsstands and most of them are unfortunately in Tagalog, you might be lucky if you find an English version of it.
Embroidery: Embroidery is a best buy because the most of the national dresses are embroidered from piña (pineapple) leaves and other raw material. Handmade ones tend to be more expensive than machine-made ones.
Food: Buy dried mangoes, Goldilocks and Red Ribbon has pastries and sweets such as polvoron are also good to purchase. Native specialties are sold at pasalubong centers. Aside from pastries and sweets, buy condiments such as banana ketchup, shrimp paste (bagoong) as they are hard to find outside Asia. Don’t miss the chocolates of the Philippines; Choc-nut and tablea, Choc-nut is like a powdered chocolate with a sweet taste and often sticky once it sticks to your gums, Tablea are chocolate tablets used for making hot chocolate.
Jewelry: Silver necklaces and pearls are popular in the Philippines, however it is discouraged if you buy jewelry made out from endangered animals and corals, as they are slowly disappearing. Handmade jewelry made by indigenous tribes of the Philippines are available, as well as jewelry made from wood.
Mats: Pandan leaves are weaved and made into a mat, mats tend to be different in each region in the Philippines, Mats in Luzon tend to be simple, while in Visayas, they’re multi-colored, and in Mindanao, the Lumad tribes weave complex and difficult designs that often have meaning distinctive to their culture.

Movies and music
CDs containing music and Blu-ray DVDs containing either local or Western films are available in reputable chain stores inside malls, but the very cheap option are most likely outright pirated copies. The CDs or DVDs sold at very cheap prices as low as ₱10 are most certain to be bogus, either smuggled from China or pirated in the country; street markets, most notably the ones in Quiapo, Manila, are hotspots for open sale of pirated films. While locals living or working overseas might be able to bring counterfeit discs into the country they are residing, it is best not to follow their examples to avoid risking legal trouble on customs checks once you return home.

Shopping malls
The air-conditioned shopping malls form the largest share on the Filipino retail sector, and it isn’t hard to find shopping malls in the Philippines, from large to small and modern to traditional.

The major mall chains are SM Supermalls, Robinsons Malls, CityMall and Ayala Malls, with locations around the archipelago. There are other major chains as well, including Walter Mart, Vista Malls and Megaworld Lifestyle Malls, and some regional chains, like Gaisano in Cebuano-speaking areas, CSI in Pangasinan, and LCC in Bicol. Most, but not all, are tied to real estate conglomerates, and some have partnerships (e.g. SM Supermalls partners with CityMall and Walter Mart).

Malls typically open at 10AM till 9PM, but may open earlier and/or close later during weekends and the Christmas shopping season (September to early January). Most are closed during Christmas, New Year and Good Friday.

Department stores and fashion retailers
Department stores in the Philippines tend to be chains tied with a shopping mall chain; prime examples are The SM Store, Robinsons’s Department Store, Metro Gaisano and Rustan’s. Others form standalone stores that can found on inner-city or downtown areas, some being chains such as Unitop and Novo and others being mom-and-pops. As a rule of thumb, department stores at malls tend to be more expensive, while downtown or inner-city locations will be cheaper. Some may also have a supermarket at the basement.

Supermarkets
Supermarkets in the Philippines are dominated by five large chains:

Local, non-chain grocery stores exist in town centers, but they are prone to future closures as the larger chains open one or more stores. In less developed areas, mom-and-pop supermarkets remain strong.

Convenience stores
Chain convenience stores are common in urban areas, and it is not unusual to see two stores of the same chain near each other. Major chains include 7-Eleven, with over 3000 stores and Ministop, with over 700 stores. There are also locally founded chains, like All Day with over 150 stores, and San Mig Food Ave, most of whose stores are rebrands of the Treats stores in Petron stations. Imported brands like Alfamart from Indonesia, and FamilyMart and Lawson from Japan have stores in the Philippines, and are expanding. Most, but not all of these chains are tied with any of the major retailers (e.g. Ministop is tied to Robinsons, Alfamart is tied to SM).

Many convenience stores are operated by a franchisee, if not directly by the larger managing company. Convenience stores in the Philippines generally have a wide variety of products, usually a subset of products sold in a grocery store, and fast food, that can be eaten at-store or outside store, as well as services like cell phone load, money transfer, courier service and bill payment. They mostly operate round the clock, but some, like some Alfamart stores or stores inside malls for example, only operate in specific hours of the day. Some stores may be found in a gas station, but they are mostly of a different brand, as stores with a brand tied with the oil company (e.g. Shell Select, Petron Treats) are rather the exception than the norm these days.

Aside from those, traditional, sari-sari stores (small corner stores) are common, especially in the rural areas and the barangays, and they outnumber convenience stores outside urban areas. These are mostly family-owned stores usually found beside a road, and sell items that can be bought in grocery stores or general merchandise stores, but lacks the lavishness of ordinary convenience stores. They mostly have large advertisements, usually of cell phone “load”, soft drinks, energy drinks, coffee, alcohol, and cigarettes, along with the store name below. Sari-sari stores also provide cell phone “loading” in addition to selling products.