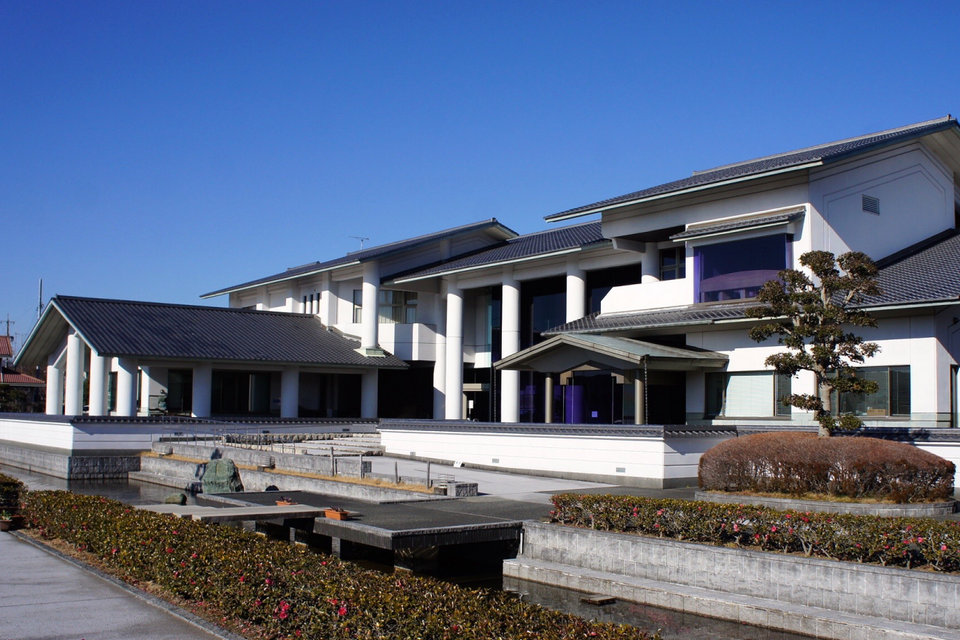 Shimada City Museum is a municipal museum operated by Shimada City, Shizuoka Prefecture. In addition to the main building that introduces the city’s history, culture, and art, there is a branch consisting of a “folklore room” that displays folklore materials, a “Meiji Japanese house”, and a “print memorial museum” that honors the printmaker Mitsuhiro Unno. .

There is Site of Shimada Inn, Oi River River-Crossing Ruins officially-designated historical site on the east side of this museum. And there is an annex along the site which is composed of the Japanese houses built in the Meiji era, the memorial museum of Unno Mitsuhiro and the museum of folklore. You can view works of the other woodblock artist; Unno Mitsuhiro and other artists on special exhibition.

Overview
Located 1.8 km west of Shimada city center, near the Oigawa riverbed. The museum is located along the highway of the national historic site “Shimadajuku Oigawa Kawagoe Ruins” that reproduces the post of the former Tokaido Shimadajuku over the Oigawa River. There is a branch along the highway about 200 meters northeast of the main building.

Main building
A two-story building with a Japanese-style tile roof. In the permanent exhibition room on the first floor, you can learn about the history of the city by introducing materials from the Edo period, such as Shimada-juku and Oigawa Kawagoe, Shimada’s swordsmith, Shimada Festival, Shimada Kaoru, Shidoro ware. . The second floor is a special exhibition room that regularly holds special exhibitions based on certain themes. In addition to historical materials, the museum also stores art collections such as modern and contemporary paintings, ceramics, and crafts.

In the permanent exhibition, with “Travel and Travelers” as the main theme, we consider why people traveled, and introduced the Oi River and Kawagoe River in the late Edo period, and the Shimada-juku river-stopping culture.

Swordsmith Hair
Shimada-juku is famous for swordsmiths, and many swordsmiths lined up the eaves. The Shimada Blacksmith Group has a history of about 400 years from the Muromachi period to the end of Edo, and its swords called “Shimadamono” are highly regarded by many warlords such as Sengoku Daimyo Imagawa, Takeda and Tokugawa. it was done. In particular, Yoshisuke and assistant sect remain many masterpieces.

Shimada
“Shimada Kaoru” is said to have been invented by Tora Gozen, a prostitute who is said to be from Shimada. Shimada Kei is transmitted to Kyoto and Edo, and there are various variations. The museum has a permanent exhibition of several types of Shimada Domain. On the third Sunday of September every year, the women in Yukata wearing a matching yukata walk through Shimada City while performing votive dances, and are said to be a temple in front of the tiger. There is a Sakai Thanksgiving Day at Kanda-ji Temple.

Folklore room
It stores folk materials donated by citizens (such as daily necessities, tools, and farm tools), and exhibits on the Meiji, Taisho, and Showa eras.

Meiji Japanese house
The old private house “Old Sakurai House”, built in 1890 (Meiji 23), has been restored and released. It is also used as an exhibition room for contemporary art.

The former Sakurai residence built in 1890. The townhouse, which features a large roof tiled up from the front door to the roof on the second floor, has the atmosphere of an old house. The first floor is made with a traditional construction method, and the second floor is a delicate and calm Kyoto sukiya style so that it can be used as a tea room.

You can enjoy the exhibitions in a relaxing atmosphere full of Japanese emotion. In addition, the wells at the time when the house was built and other folk materials are displayed outside.

Mitsuhiro Unno Print Memorial Hall
Awarded the print artist Mitsuhiro Unno (1939-1979) from Shizuoka City, collecting and displaying works donated by the bereaved family to Shimada City. A special exhibition will be held to show the works of modern woodcut artists.

Born in Shizuoka City in 1939 (Showa 14), he produced full-scale prints from the first year of middle school. In 1977, he won the Swiss Art Prize Exhibition Excellence Award and collected and exhibited many works by Mitsuhiro Unno, a printmaker who suddenly died at the age of 39 while working as a printmaker. It is a memorial hall.

Many of the styles depict human beings who live in each climate, and are characterized by the technique of overlaying colors on the black version of the woodcut. His gentle view of humanity is expressed, making the viewer’s heart feel a strange nostalgia.

The work was donated by Mrs. Unno in 1999. Umino’s works are also held in the Swiss Petit Palais Museum, the Chicago Museum of Art, the Hamamatsu City Museum of Art, etc. Opened in 2000, this memorial hall is white, precious, contrasting with the black of a Japanese house, and in harmony with the greenery of the courtyard, creating a peaceful space.

From Kanaya station bus stop, take the local bus “Kanaya Shimada Hospital Line (for Shimada Municipal Hospital)” (* only on weekdays), get off at “Mukojima Nishi Bus Stop” 10 minutes on foot