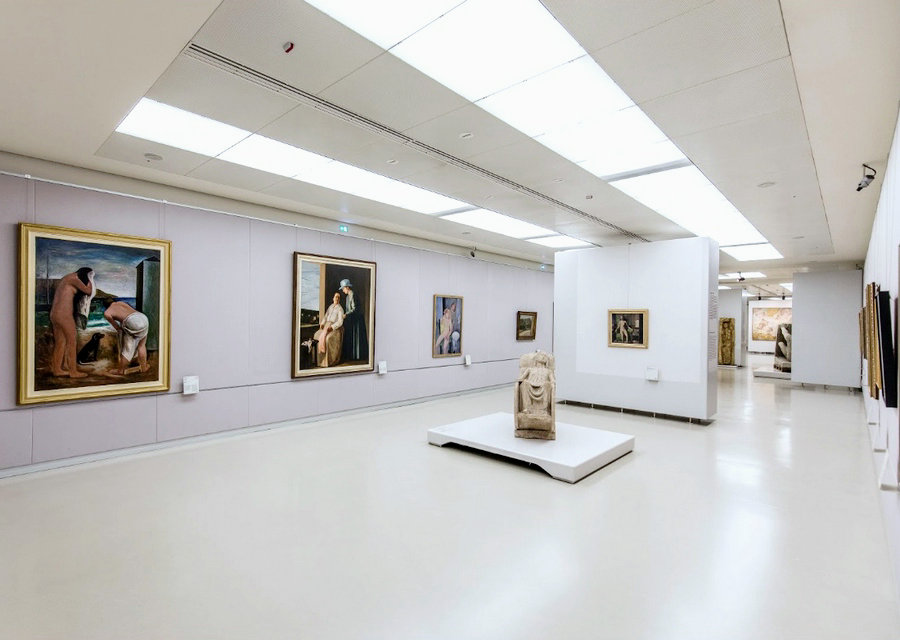 Room of Arturo Martini, Museum of the Twentieth Century

The Twenties and Thirties, moving between the Novecento movement and Abstract Art, develop through a sequence of solo art show ‘islands’ devoted to Giorgio de Chirico, Giorgio Morandi, Arturo Martini, and Fausto Melotti. To Marino Marini is devoted a proper hall, aimed to describe the artist’s rich and nuanced production.

Biography
Arturo Martini (1889–1947) was a leading Italian sculptor between World War I and II. He moved between a very vigorous (almost ancient Roman) classicism and modernism. He was associated with public sculpture in fascist Italy, but later renounced his medium altogether.

The early years
He was born into a disadvantaged family, third of the four children of Antonio, a professional cook, and Maria Della Valle, a maid originally from Brisighella.

Expelled from school in 1901, due to repeated failures, he became an apprentice at a goldsmith’s shop in Treviso and immediately afterwards attended the ceramic school (he collaborated in particular with the Gregorj War Furnace) where he learned the artisan modeling practice.

Fascinated by this technique he began to attend the studio of the sculptor Antonio Carlini in Treviso and at the same time he attended the first year (1906-07) of the Academy of Fine Arts in Venice. He manages to devise a new chalcographic type of engraving technique which he himself calls keramography.

His first known works date back to this period: the Portrait of Fanny Nado Martini, in terracotta (1905) and the Bust of the painter Pinelli, which refer to late nineteenth century sculpture.

In 1908 in Venice he participated in the first edition of the exhibitions of Ca ‘Pesaro with the small sculpture Il Palloncino.

His inventions and his plastic imagination will soon allow him to acquire fame and notoriety on an international level, assuming a predominant role in the European artistic panorama of which he was well aware.

The debut in Europe and the magazine “Valori Plastici”
Interested in European artistic movements, he attended the Adolf von Hildebrand School in Munich in 1909. In 1912 he moved for a few months to Paris where he deepened his knowledge of cubism and the avant-garde and where he exhibited at the Salon d’Automne.

Participates in the International Free Futurist Exhibition, held in Rome, between April May 1914 with the Portrait of Homer Soppelsa, considered a tribute to Futurism. In the same years he collaborated with the futurist magazine L’Eroica, dedicated to the themes of art, literature and woodcut.

Futurism
Martini seems to have been an active supporter of the Futurist movement between 1914 and 1918. He certainly corresponded with Umberto Boccioni and produced a modernist booklet in 1918. His early works show an archaic tendency, two-dimensionality and polychrome effects

He forcibly interrupts his activity because of the war, in which he participates.

He then approaches abstract graphics and the first sketches of his artist book Contemplazioni are born. Instead of the text, the book presents a sequence of geometric signs.

In April 1920 he married Brigida Pessano, from Vado Ligure, where he settled for a few years. Maria Antonietta (1921) and Antonio (1928) are born from their marriage. This is the period in which he realizes The Dead Lover, Fecundity and The Sleeper.

He collaborates, between 1918-22, with Mario Broglio in the magazine Valori Plastici, joining the homonymous artistic movement. Thanks to this experience he rediscovers ancient sculpture, thus overcoming nineteenth-century naturalism to which he was still attached. Among the important works of this period we remember La Maternità (1925) and Il Bevitore (1926), the latter is a terracotta work kept in the Pinacoteca di Brera.

In 1925he is invited to exhibit in a room at the III Roman Biennale; the following year, after previous refusals, he participated for the first time in the Venice Biennale. In the same year he exhibited at the first exhibition of the twentieth century, a movement of which he will also be present at the second edition of 1929 with the sculpture The Prodigal Son (1926). In November 1927 he inaugurated a ceramic exhibition in Milan at the Pesaro Gallery.

The artistic maturity
In the latter period he defines his art which translates into an ideal meeting point between ancient and modern. In 1928 he created great works such as La Pisana, Il Bevitore and the monumental (four meters) Tomb of Ippolito Nievo.

In 1929 he was called to the decorative plastic chair of the ISIA of Monza and remained there until the following year: his Leda with the swan, plaster sculpture, remained to enrich the collection of the Civic Museums of Monza.

In 1930, he set up a “studio-oven” in the Ilva Refrattari factory in Vado Ligure, where he can model and cook crockery without having to move it. He thus creates a series of great works, such as The Shepherd and The Sitting Boy (1930), The Dream (1931), Moonlight and Winter Sports (1931-32), works in which the allusion to the movement that seems to stiffen in the form.

In 1931 he received a prize of one hundred thousand lire at the First Quadrennial in Rome, a sum that allowed him to temporarily resolve the various economic problems that had always tormented him. In 1932 he has a personal room at theVenetian Biennale, from which it obtained a vast success.

In 1933 he settled in Milan and held a solo exhibition at the Gallery of Modern Art. In this period he experimented with the use of new expressive techniques such as wood, stone, clay and bronze, he was seen regularly participating in major national exhibitions: at the Venice Biennale (1934-36-38), at the Triennale di Milan (1933-36-40) and the Rome Quadrennial (1935-39).

During this period he made numerous monumental sculptures including the gigantic plaster Moses saved from the water, six meters high, exhibited at the Milan Triennalein 1933; The thirst (1934), in stone, where the memory of the casts of Pompeii re-emerges; the bronze of Athena (1935), five meters high; The deaths of Bligny would start (1936), inspired by Mussolini ‘s speech against the economic sanctions imposed on Italy after the occupation of Ethiopia in 1935; The Lion of Judah (1936), dedicated to the victory over Ethiopia; Corporate Justice, intended for the Milan Palace of Justice; The Sforza Group (1938-39), work destined for the Niguarda Ca ‘Granda Hospital in Milan.

The painting
In the years 1939 and 1940 he began to paint. In 1940 he successfully exhibited his works at the Barbaroux Gallery. He writes, in February 1940, in some letters addressed to Carlo Anti, rector of the University of Padua: I will absolutely be a painter my conversion is not a whim, but it is as big and strong as that of Van Gogh and again I’m happy, painting amuses me and gives me other hopes that sculpture no longer gave me

He made some high-reliefs between 1940-42 for the Palazzo dell’Arengario in Milan: Il Tito Livio and The woman swimming under water. In these works he moves towards an ever greater expressive freedom, convinced of the need to overcome statuary and that sculpture ” if it wants to live, must die in abstraction”. He will take up this theme again in his talks on sculpture.

The last few years
From 1942 to 1944 he was in Venice where he taught sculpture at the Academy of fine arts. In the summer of 1945 he was suspended from teaching for joining fascism. Regarding this choice, he had written: Since I was starving with Giolittismo, I believed in this movement, that is, in fascism.

At the end of his artistic career he received the commission for the statue of the virgilian hero Palinuro (1946) for the University of Padua; he also created the funeral monument dedicated to a fallen partisan, the Monument to the partisan Masaccio (1947). Finally, he designs an appendix to the libretto La sculpture lingua morta, communicating his thoughts to the writer Antonio Pinghelli, who will publish them posthumously, in 1948, with the title Michelangelo’s makeup.

He died in Milan on March 22, 1947, suffering from cerebral palsy. Among his students is the artist Maria Lai.

The Exhibition
Arturo Martini was one of the most prominent sculptors working in the first half of the 20th century, and his works had a profoundly modernising influence on the plastic arts in the 1930s. Over the course of his career, the artist produced both monumental works and sculptures destined for a new breed of collectors.

Le stelle (1932)
Busto di ragazzo (1921)
Gli amanti (Il bosco) (1932)
Le collegiali (1927)
These collectors were the intended audience for the terracotta and ceramic pieces in which Martini narrates episodes: self-contained or unresolved short stories such as Le collegiali (The Schoolgirls, 1927) and Gli Amanti (The Lovers,1932).

The monumental works
As a figure on the national art scene, Martini took part in the major exhibitions of the Thirties, from the Venice Biennale to the Rome Quadriennale, where he won the first prize for sculpture in 1931. At these shows, he presented larger works with a greater impact, stone pieces based on the study of ancient sculpture such as “La sete” (Thirst), of 1934, which was part of a series of works inspired by the Pompeii discoveries.

I morti di Bligny trasalirebbero (1935)
Torso di giovanetto (1929)
Storie di Milano
He created decorations for many public buildings in the Thirties, including the high reliefs depicting the Storie di Milano (Stories of Milan, 1942 -1947) for the Arengario, now home to the Museo del Novecento.

Museum of the twentieth century in Milan
The Museo del Novecento in Milan is a permanent exhibition of 20th century works of art housed in the Palazzo dell’Arengario and the adjacent Royal Palace in Milan. The museum absorbed the collections of the previous Civic Museum of Contemporary Art (CIMAC) which was located on the second floor of the Royal Palace and which was closed in 1998.

The Museo del Novecento, located inside the Palazzo dell’Arengario in Piazza del Duomo, hosts a collection of over four thousand works that catalyze the development of 20th century Italian art.

The Museo del Novecento was established on 6 December 2010 with the goal of spreading knowledge of 20th century art and offering a more comprehensive insight into the collections that the city of Milan has inherited over time. Beside its core exhibition activity, the Museum is active in the conservation, investigation and promotion of 20th century Italian cultural and artistic heritage with the final aim of reaching an ever wider audience.

Apart from a single room housing works by foreign artists including Braque, Kandinsky, Klee, Léger, Matisse, Mondrian and Picasso, the majority of the works exhibited in the museum are by Italian artists. A major section is devoted to the Italian Futurists, with works by Giacomo Balla, Umberto Boccioni, Carlo Carrà, Fortunato Depero, Luigi Russolo, Gino Severini, Mario Sironi and Ardengo Soffici. Giuseppe Pellizza da Volpedo’s large canvas Il Quarto Stato (1902) is also exhibited in a room on its own.

Other sections of the museum are dedicated to individual artists such as Giorgio de Chirico, Lucio Fontana and Morandi. There are also sections devoted to art movements of the twentieth century, including Abstractionism, Arte Povera, the Novecento Italiano, Post-Impressionism and Realism, and to genres such as landscape and monumental art.