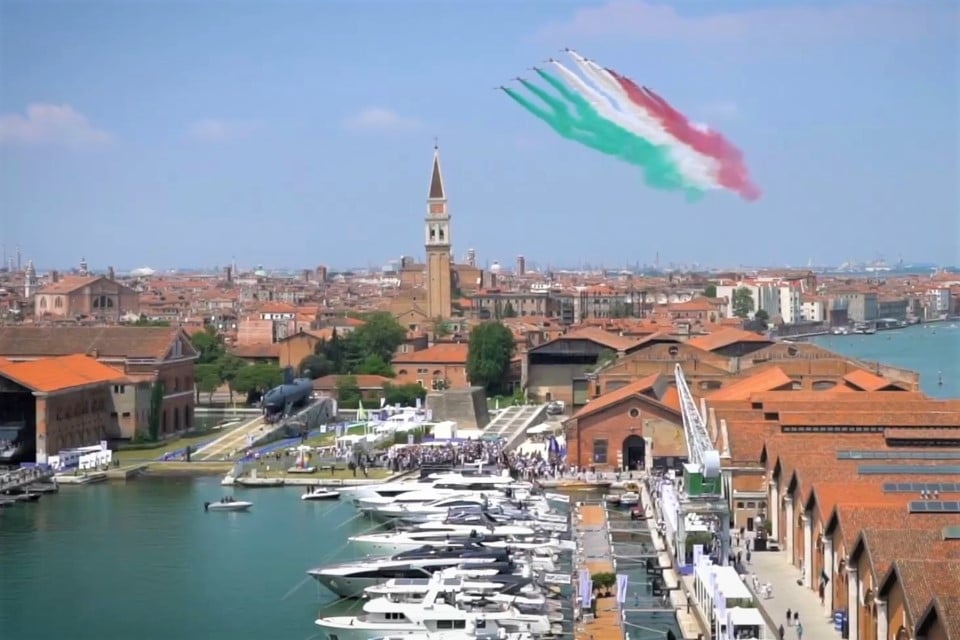 The Venice International Boat Show 2019, last from June 18 to 23, the first edition of the Boat Show of Venice was held in the spaces of the Arsenale, a symbolic place of the city where the ships of the Serenissima Republic have been built throughout the navigable world for centuries. There was performances and Venetian rowing trials, visits to the Mose operations center, meetings on hybrid engines and the most modern technologies, culinary competitions, exhibitions of crafts related to the Venetian navy, nautical competitions and excursions.

The Venice Boat Show host over 50 boats from 15 to 50 meters, as well as 100 exhibitors of pleasure boats, related and nautical accessories. Visitors can also participate in numerous events and conferences with themes relating to boating, the environment, sustainability and more. An incomparable historical context, in the heart of Venice, consisting of a water basin of 50,000 square meters, and fully restored ancient pavilions, spaces characterized by Istrian stone columns and large and bright vaults, for a total area of 6,000 square meters.

For visitors, in addition to being able to visit the exhibition areas and carry out tests in the water of the boats, there was events and entertainment for children and families. There was visits to the “Dandolo” submarine, the Naval History Museum and the Naval Pavilion, performances and sailing and rowing trials in the Venetian style, exhibitions of crafts related to the Venetian navy, nautical competitions and excursions. The visit also be enriched by numerous refreshment points dedicated to the world of the sea.

In this exceptional exhibit, where the best of national and international naval production can be admired, visitors also immerse themselves in the glorious history of Venice and understand how Venice was one of the greatest maritime powers thanks to its flourishing naval industry. The boat fair also host many events including shows, guided tours to the most representative places in Venice’s naval history, presentations, talks and themed tours in different areas of the city.

The Venice International Boat Show, also known as the Festival of the Sea, is an annual exhibition of pleasure boating held in Venice in June at the Venice Arsenal. It was held for the first time in 2002 and, starting from a local market dimension, in a few editions it has reached a national and international rank, constantly expanding. The Venice Boat Show is promoted by the Municipality of Venice and realized through the company Vela spa, in collaboration with the Italian Navy.

In the spectacular structures of the city’s Arsenal, symbol of the power and military power of the Serenissima Republic and the heart of its naval industry which has allowed it to be one of the greatest maritime powers for centuries.

During this special event, the Naval History Museum also open its doors to the public which is located a few steps from the entrance of the Arsenale and the Venice Boat Show 2019. The Naval Museum, the only one of its kind in Italy, houses some of the most fascinating boats of Venice’s Republic and traces the glories of the military and naval power of the floating city.

Venice Boat Show 2019
This year Venice return to host the highly anticipated international event dedicated to all lovers of the nautical world. The location in charge of hosting the fair was the imposing complex of the Arsenale of Venice, a place with a strong historical value, a symbol of power and an icon of the Venetian naval industry.

The boats of the main Italian and foreign shipyards was exhibited along the docks of the Arsenale, while accessories, engine systems and equipment was placed inside the Tese. During the Salone, the Arsenal was open to the city through the Naval Pavilion, a section of the Naval Historical Museum of the Navy, thus allowing access from the monumental entrance.

It was a first contact with navigation also through the unprecedented route “in the water”.Particular attention was dedicated to the composite world of Venetian shipbuilding, with its different attitudes and vocations. Along with the traditional wooden boats, typical of the lagoon, the vehicles of the civil and military law enforcement agencies including some ships also be exhibited.

These are three large communicating tents for a total of over 3,500 square meters, restored respecting the original architectural structure with the enhancement of the large and bright vaults that characterize the spaces. They were built starting from 1525 in the period of development of the Arsenale Novissimo (1473-1573) along the north wall of the Arsenale. Built as “water faces” or water yards, they have maintained this peculiarity for a long time until they were buried in 1880. Inside the Tese there was pre-fitted stands.

The event also offer great entertainment for children and families, the opportunity to visit the submarine “Dandolo”, the Naval History Museum and the Ships Pavilion. Attend sailing and Venetian rowing performances and motor boat competitions and sailing regattas.

Collateral events
There are also numerous collateral initiatives in various rooms and spaces of the Arsenale. It start on Wednesday 19 June, in the Spazio Incontri, with a conference on design that see guests the designer Carlo Nuvolari, Luca Bassani, inventor of the Wally Yacht brand and Carlo Fei, professor in Fashion Management at Luiss in Rome.

International competition
On the occasion of the Boat Show, the Fondazione Musei Civici di Venezia, with the Municipality of Venice and Vela Spa, launched an international call for proposals for the selection of boat projects. The selected works, chosen from over seventy participants, was exhibited inside the Tesa 113 of the Arsenale, where a series of cultural activities related to nautical design and culture also take place with various guests.

Green exhibition
The focus of the event was sustainability which finds its exhibition moment in the E-Village in a wide series of hybrid and electric projects, which had already characterized the first edition. The figure of the diver among the protagonists of the Venice Boat Show 2019 to talk about the protection of lagoon waters.

On World Environment Day, the gondoliers, volunteer divers, dived for demonstration purposes in the waters of the Arsenale, in Rio delle Galeazze, with both vintage and modern equipment. Periodically these underwater athletes clean up the canals of Venice bringing to the surface tons of unimaginable waste: boilers, bicycles, sinks, outboard motors and so on and so forth. Their activity is precious for the health of the lagoon and also for the image of a beautiful and clean Venice.