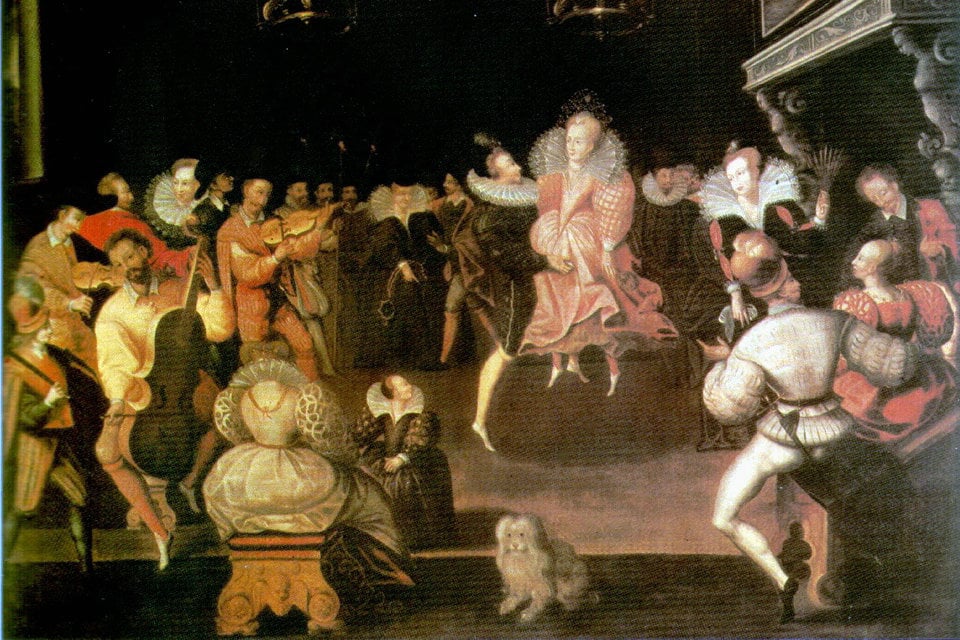 Renaissance dances belong to the broad group of historical dances.During the Renaissance in the Italian courts developed a sought form of dance that included rules to be followed and a certain study of steps and movements. In fact, the dance was considered a real form of education. The dance of the nobles was directly derived from that of the people, but was transformed according to the rules of the perfect courtier: the composure, the noble attitude, the social conventions of chivalry and gallantry. In the fifteenth century the figure of the dance teacher was in great demand to instruct the lords and the courtiers; among these, Domenico da Piacenza (called “Domenichino”) and his disciple Guglielmo Ebreo da Pesarothey will be the first authors of real treatises of what was already called the “Art of Dance”. Domenichino wrote the manual De arte saltandi et choreas ducendi and William, author of the De practice seu arte tripudii vulgare opusculum, acquired a reputation such as to be called to the court of Urbino by Federico da Montefeltro. Antonio Cornazzano, who wrote the Book of Dance Art, is their contemporary.

Overview
During the Renaissance period, there was a distinction between country dances and court dances. Court dances required the dancers to be trained and were often for display and entertainment, whereas country dances could be attempted by anyone. At Court, the formal entertainment would often be followed by many hours of country dances which all present could join in. Dances described as country dances such as Chiarantana or Chiaranzana remained popular over a long period – over two centuries in the case of this dance. A Renaissance dance can be likened to a ball.

Knowledge of court dances has survived better than that of country dances as they were collected by dancing masters in manuscripts and later in printed books. The earliest surviving manuscripts that provide detailed dance instructions are from 15th century Italy. The earliest printed dance manuals come from late 16th century France and Italy. The earliest dance descriptions in England come from the Gresley manuscript c.1500 found in the Derbyshire Record Office, D77 B0x 38 pp 51–79. These have been recently published as “Cherwell Thy Wyne (Show your joy): Dances of fifteenth-century England from the Gresley manuscript”. The first printed English source appeared in 1652, the first edition of Playford.

The dances in these manuals are extremely varied in nature. They range from slow, stately dances (bassadance, pavane, almain) to fast, lively dances (galliard, coranto, canario). The former, in which the dancers’ feet did not leave the ground were styled the dance basse while energetic dances with leaps and lifts were called the haute dance. Some were choreographed, others were improvised on the spot.

One dance for couples, a form of the galliard called lavolta, involved a rather intimate hold between the man and woman, with the woman being lifted into the air while the couple made a 3⁄4 turn. Other dances, such as branles or bransles, were danced by many people in a circle or line.

Modern ideas about the earliest European dance culture of the Renaissance rest on the works of three masters of dance from Italy: Domenico of Piacenza, Antonio Cornazzano and Guglielmo Ebreo. Their works describe similar sets of steps and dances, but at the same time the students (Ebreo and Kornatsano) have some development. Basically they have basses in balletto (a suite from pieces of dance genres, a forerunner of the court ballet). These are the earliest of the well-documented European dances, of choreography, movements and the musical accompaniment of which has reached our days considerable information.

The earliest written source for dances in England is the so-called. “Gresley manuscript” – is dated to the year 1500.

By the end of the 16th century, the earliest published printed manuals on Renaissance dance, and they come from France and Italy.

The theoretical work of 1581 “Dancer» (Il Ballarino) Italian choreographer Fabrizio Caroso gives detailed descriptions of the main ballroom dances of the time, among them: galliard, canario, Saltarello, tordilone. In the late work of 1602, Cesare Negri, “The Grace of Love” (Le gratie d’Amore), 50 genera of jumping movements (“ornaments”) are given, for example, schisciata – “to slide forward with a heel and back toe”.

Information about court dances has been preserved in a much larger volume than about folk dances. The fate of the folk dance of the Saraband, which was even banned in Spain in 1583, is indicative. The surviving musical samples of the saraband were preserved due to its transformation into a slow court dance in Italy and France in the 17th century and belong to musicologists already in the Baroque era. Similarly, the dance of the chakona passed in the 17th century to the court ballet in France, gaining a slow pace, a ceremonial character. From such a dance as folia (as well as romanesque and passametstso), only the eponymousmusical themes – thanks to the written works of musicians, instrumentalists.

A rare exception is Moreschi, a folk dance of street theater (see. ” Commedia dell’arte “), has come down to the present day thanks to the choreographic described in his treatise ” Orhezografiya » (Orchésographie, 1589) T. Arbeau, as well as in the later writings of M. Pretorius (1612) and M. Mersenne (1636). In the works of Shakespeare there is a pronounced skomoroshesky style of the British jig of the 16th century (named after the miniature violin of the Italian master of dances). Thanks to the Italian folk song collector Filippo Azizaoloinformation about the folk dance of the 15th century from the outskirts of Bergamo in Italy under the name of Bergamasca (also mentioned in Shakespeare’s ” A Midsummer Night’s Dream “) has been preserved.

Fifteenth-century Italian dance
Our knowledge of 15th-century Italian dances comes mainly from the surviving works of three Italian dance masters: Domenico da Piacenza, Antonio Cornazzano and Guglielmo Ebreo da Pesaro. Their work deals with similar steps and dances, though some evolution can be seen. The main types of dances described are bassa danze and balletti. These are the earliest European dances to be well-documented, as we have a reasonable knowledge of the choreographies, steps and music used.

Italian-French coloring
At the end of the fourteenth and sixteenth centuries, the main features characteristic of the European dance music of the Renaissance began to form: regular accent rhythm, structural periodicity, square, homophonic, memorable song melody (although not similar to melodic tunes of later time).

In France and other European countries, the features of the new dance art are manifested in the late XVI-XVII century, whereas in Italy the flowering begins at the end of the XIV-beginning of the XV century. Therefore, during the XV-XVI centuries, Italy was the legislator of dance fashion: Italian teachers worked in all countries of Europe, many dance genres of Italian origin dominated both in ballrooms, and in theatrical performances or composer’s creativity. Later (from the XVII century, ie already in the Baroque era), the dance fashion was dictated by the French for two centuries in a row.

Types of the Renaissance dances
Dances in the sources of the Renaissance vary greatly in their essence. They are both slow, solemn – the bass dance, the pavana (and the passametstso close to it), the allemande – and the fast, lively – Saltarello, galliard, turdion, chime, canario. The first, where the dancers do not tear both feet off the ground at the same time, began to be called ” lower ” or “low dances”, while the latter, energetic, with jumps and ups (support elements) partners, mostly refer to “high dances”. An exception is a dance called a beer, which, despite the high tempo, refers to the lower dances. Some of the Renaissance dances are choreographically canonical, in others there is a room for improvisation. One of the paired dances, the volta, considered to be derived from galliard, implies a fairly large affinity between a man and a woman, because when a partner is performing, she holds a woman in the air for 3/4 turns. Other dances, such as branl, are performed by many people in a round dance (in a circle or in a row).

At the end of the era, special dance forms are recorded, in which elements of high (such as Saltarello) and low (such as pavana) dancing are found – a cascade, a spaniellet.

In Italy, in the 16th century, the fashion for the dance sequence, the acclaimed ballo (Italian ballo – “dance”), in which later galliards and a cascade replaced the out-of-fashion Saltarello spread.

The tradition of contrasting the slow dance procession (“low dance”) and live jumping dance (“high dance”) gave birth to a musical form, like a suite, which, in turn, influenced the formation of the sonata form.

Folk dances in a Brueghel painting, circa 1525-1530
Some types of Renaissance known dances are: