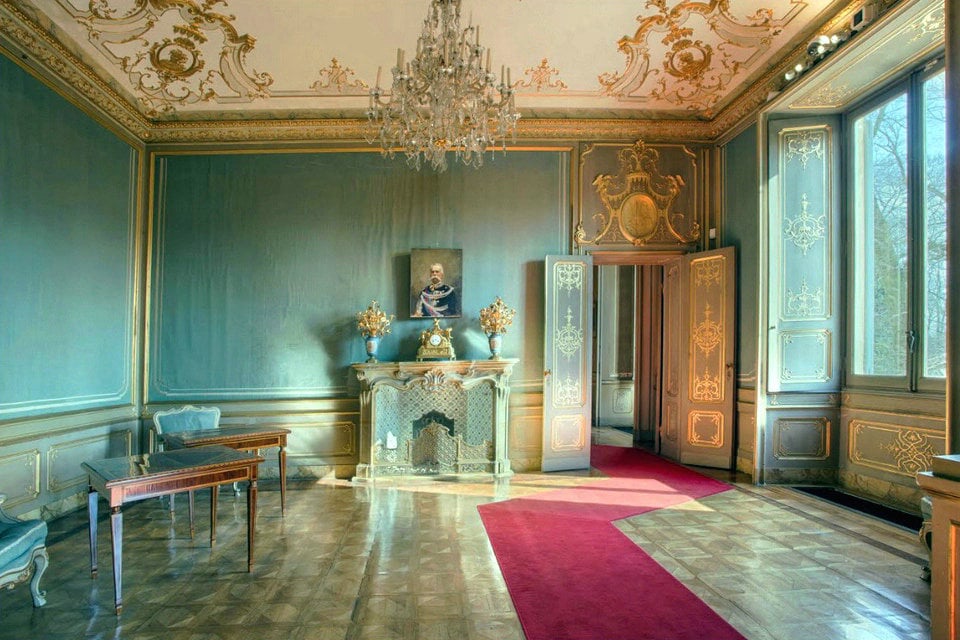 All the apartments are rich in decorations and precious inlays, each room is finely decorated according to the taste of the royalty, especially the apartments of the Emperors of Germany suggest the magnificence and grandeur with which the Savoy royalty loved to welcome their illustrious guests.

The private apartments of the guests and those of the sovereigns represent the most significant rooms of the second noble floor. These rooms are accessed from the grand staircase, a triumph of marble with two large bronze and gilded iron street lamps with the symbols of the Savoy house (the node and the motto Fert).

At this point, the visitor has access to the apartment of the emperors of Germany, with the particularity of the floor with geometric shapes mirroring those of the ceiling; the apartment of the Prince of Naples, with its wooden wardrobe crowned with carved vases and floral wreaths, the folding bed of the Prince of Naples’ valet, still visible in the periods in which the setting up of the exhibitions allows it; the apartment of the Duchess of Genoa, in which the vaulted portion of Piermarini stands out with the opening of the “fireplace of light” which allowed light to enter from the Belvedere floor, the wooden wall from which, it is said, the Duchess eavesdropping on the speeches of the ladies of companionship, and the apartments of the emperors of Germany with the singularity of the ceiling mirrored to the floor,

The private apartments of the sovereigns, on the other hand, are the result, in its current guise, of the intervention carried out at the end of the 19th century by the court architect Achille Majnoni d’Intignano, who adapted to the taste of the time all the rooms located on the right of the central hall, always intended for this function. The apartment of Umberto I includes the hall, the study, the bedroom, the bathroom, the wardrobe and the armory. In the apartment of Queen Margherita the living room, the bedroom, the toilet, the wardrobe must be mentioned.

Apartment rooms:
The object of the recent restoration is the central body of the Villa Reale, which is divided into the ground floor, first noble floor, second noble floor and Belvedere. The actual visit begins on the first floor, where the royal family’s meeting rooms are located. Prominent is the ballroom, the only double height hall of the Villa, with decorations on the vaults and on the walls, imitation marble mirrors, rich chandeliers and Venetian seminato flooring.

The private apartment of King Umberto I and Queen Margherita is, in its current guise, the result of the intervention carried out at the end of the 19th century by the Court Architect Achille Majnoni d’Intignano, who adapted all the rooms located to the right of the Central Hall, always intended for this function.

In the queen’s living room, the crimson damask tapestry with floral motifs, and the four glass doors placed at the corners of the room (the sovereign must have had a total perception of who was present in her apartments). The vault houses golden decorations with Ruinian landscapes. A small front door connects directly to King Umberto I’s apartment.

The itinerary includes a visit to the private apartments of the sovereigns. All the spaces that are part of the museum itinerary are list below.

Pendulum room
This was probably the waiting room for the archduchesses’ apartment, which later became that of Queen Margherita. It anticipates the “Salotto della Regina” and is connected with the “Sala dei Ciambellani”, then simply called “Sala verso Corte”. As well as the rest of the private apartments, it reflects the taste of Umberto that characterizes the changes and renovations.

Disengagement
They are inserted inside the spaces as architectural innovation. The corridors that allowed to meet the needs of guests.

Royal library
Realized by the union of two rooms, the splendid walnut library, on two levels were once a common place for the apartments of the two sovereigns. The aide-de-camp noted Her Majesty’s expenses for the library. The King was very fond of this environment: His Majesty says he spent 100 thousand lire in the room of the Monza Library “, noted Paulucci delle Roncole, field assistant of the sovereign in his diary.

The environment was one of the most dear to the queen. In a letter from the Queen from Monza on July 6, 1882 he writes “Here in Monza we have a quiet life, I study, I go a lot in a garden, a lot of horse. I went on to study Dante’s studies which are my hidden passion, then embarked on Mommsen who finds it as beautiful and not as heavy as it is said to be ”

Margherita received the homage of more than two hundred celebratory poems, among which we remember Giuseppe Giacosa and especially Giosuè Carducci, then considered the greatest living poet “Onde venisti? Which to us centuries / yes beautiful and mild, they handed you down ”

King’s room
The room is divided into two rooms by two plinths on which a column and a semi-column with a capital leaning against pillars rest; on the fluted shaft of the columns, garlands of golden flowers. The upholstery in place is in light blue silk with a double gallon crème silk: the pelmet is missing at the top. In the plinth the boiserie has golden squares, while on the doors, on the two lateral pillars and on the entablature there are golden “rocaille” motifs; the same can be said in the two ceilings, with angular female medallions. The two archways offer the ancient Savoy coat of arms under a golden pavilion. In front of the alcove there is a baroque fireplace with a golden bronze spark arrester. In the alcove, a bed “with wooden frame with scalloped outlines in Louis XV style with molding from head to shell,

King’s bathroom
Upholstery in place on the walls of ocher-colored velvet flowers; polychrome floral tile floor and plinth of the wall with alabaster inserts. The basin embedded in a two-step platform has an alabaster trompe-l’oeil niche. A monumental washbasin in white lacquered wood in Louis XV style. Baroque fireplace with spark arrestor in pierced and gilded bronze.

Wardrobe of the king
Crimson damask tapestry with unfolded eagle bearing the shield of ancient Savoy. Large five-door wardrobe fixed to the wall, pastel lacquered with “rocaille” decorations, as well as doors and doors. The last two doors of the wardrobe serve as a passage door to an internal staircase that goes down to the ground floor. Stucco vault.

Armory
Upholstery in work similar to that of the two previous rooms. Stucco vault with garlands of flowers on the perimeter frame. A large square display cabinet of smooth mahogany, with two bodies in which the King kept his rich collection of weapons.

A large mahogany drawer counter collected all the ammunition. At the death of the sovereign, a slow dispersion begins in the various properties of the Royal house of the rich collection of weapons.

Living room of the queen
The living room : features a crimson damask wallpaper with floral motifs. Particular are the four glass doors placed at the corners of the room; at any time the sovereign had to have total perception of the presence in her apartments. The gilded decorations of the vault portray Ruinian landscapes. The neo-baroque Rococo-style upper doors further define the entrances to the hall.

The portrait of Umberto I, dated 1901, by Eleuterio Pagliano has recently been relocated. At the bottom of the room there is a small entrance door connected directly to King Umberto I’s apartment to make access to the king’s room easier and faster.

Queen’s room
The walls of the bedroom are embellished with recently restored tapestries on the original design and made on fireproof fabric, in shades of green with decorations and floral designs. There is a seventeenth-century marble fireplace with a floral tile backdrop. The vaults are decorated with slightly raised gilding and putti.

Queen’s bathroom
Room obtained from two rooms previously used as study. In the first service room there is a toilet and latrine while in the next a bathroom. The fabrics of the blue and white bicoloured striped tapestries have also been recently restored. In one corner there is a fireplace in white marble bearing the diadem of the House of Savoy. The wooden floors of the two rooms are almost certainly made by the famous neoclassical workshop of the cabinetmaker Giuseppe Maggiolini. The artisan artist from Parabiago creates two precious inlays, the most famous of which represents the head of the Medusa.

Queen’s boudoir
The walls, finished with delicate light blue tapestries, frame one of the queen’s cloakrooms. There are gold-colored masks, traces of the ancient heating system connected to underground boilers, fueled by wood. Leaving this room, you cross the staircase from which you went down to the ground floor, where six other rooms were used as a bathroom and beauty room.

Queen’s wardrobe
The second wardrobe room of the queen. Previously called “Gallery” the vault is painted by Pietro Mariani. The long environment had always been juxtaposed to the two retreats serving the living rooms and divided by the latter by a wall. Inside there are three wardrobes, the largest of which has nine doors, some chests of drawers, chairs and tables. A French door at the head gave access to the Gallery of Passage, an iron veranda that connected Margherita’s rooms with Umberto’s apartment and from which, through a ladder “full of gilding and white and red paint”, you could access the Royal Gardens.

Become the residence of the viceroy with the Napoleonic Kingdom of Italy, it increasingly loses this function during the Kingdom of Italy of the Savoys, the last Royals to use it. It currently hosts exhibitions, exhibitions and in one wing also the artistic high school of Monza.

Wanted by Empress Maria Theresa of Austria as a country residence for her son Ferdinando I, Governor of Lombardy, the Royal Palace of Monza today represents an important place where art and culture manage to merge and amaze visitors, but also a jewel that is increasingly assuming a fundamental role from the naturalistic-ecological point of view.

Its park and gardens are, in fact, an irreplaceable lung for the hundreds of thousands of inhabitants who gravitate around it, as well as being the only oasis for many animal and plant species.

The construction of the Villa, in 1777, was entrusted to the architect Giuseppe Piermarini while the place of residence north of Monza had been identified by Archduke Ferdinando himself. The beauty of the landscape, the healthiness of the air and the presence of refined noble residences in nearby Brianza were decisive for this choice. The construction and furnishing works of the Villa (740 rooms) were completed in 1780; between 1778 and 1783 the Gardens of the Villa Reale were planted, while in 1805 the Parco della Reggia was born, extending almost 700 hectares, which still constitutes today one of the largest historical parks in Europe and the largest among those surrounded by walls. The Reggia, with its park, gardens, villa, farmhouses, mills, represents a complex of inestimable landscape, historical, monumental and architectural value.