The collection of Vincennes and Sèvres porcelains by Ephrussi de Rothschild brings together exceptional pieces that make it one of the most beautiful of its kind. In the window stand rare blue lapis lazuli porcelains. Around pieces of one of the most prestigious productions of the Sèvres manufacture known as “with musical scores”. On the mantelpiece, a pink porcelain clock “à la du Barry”.

The adjoining room allows you to discover celestial blue pieces in shades of pink as well as a vase that belonged to Madame de Pompadour. The baroness’ dining room is currently being transformed into a restaurant-tea room which offers visitors a moment of relaxation in a privileged setting. 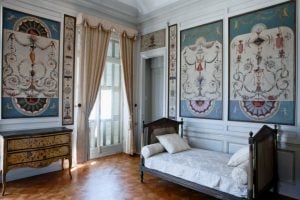 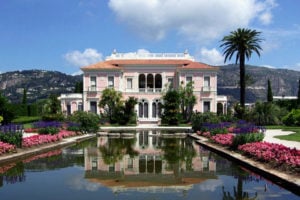 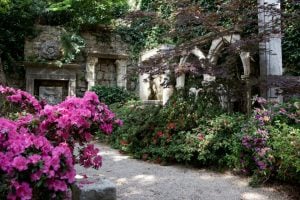 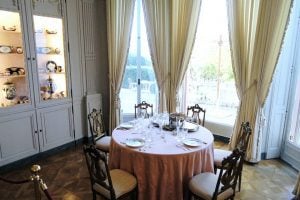 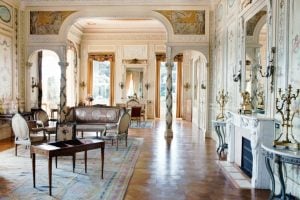 The Rothschild couple passionately collected objects related to architecture, nature and art, as well as rare unique pieces. After the divorce, Béatrice turned her attention to one of her great passions: collecting art. She had inherited her keen eye and her taste for beautiful objects from her family. The family motto was ‘Ars Patriae Decus’: ‘Art is the honour of the fatherland’. She acquired a Tiepolo ceiling, eighteenth-century furniture, a games table that had once belonged to Marie Antoinette, a rug commissioned by Louis XIV.

The baroness herself led an elaborate lifestyle. In the course of her career she collected French or non-European art of the 18th century. Many of her purchased collectibles were taken by train to the train station in Beaulieu-sur-Merbrought, and transported from there to the Villa Ephrussi de Rothschild. There was hardly any limit to her passion for collecting.

The Baroness Ephrussi de Rothschild made her Villa a true haven for art collectors with porcelain, furniture and paintings by the Great Masters. The Villa was decorated in the Rothschild style, i.e., with the best from each era, resulting in a somewhat eclectic mix.

The Dining Room
This room looks out over the Bay of Villefranche and would probably have been the bedroom of Maurice Ephrussi. Even though he and Béatrice were separated in 1904, he found it convenient to keep a room at the Villa. Today, this room has been fitted out as a dining room. This room and the next house Béatrice’s collections of French porcelain, considered to be one of the richest in France, if not the world. She got her taste for porcelain from her father Alphonse, who was a great enthusiast and collector.

All the porcelain in the dining room comes from the royal Sèvres Manufactory near to Paris, the successor of the Vincennes Manufactory created by Louis XV.

The Porcelain Room
The porcelain collection consists of pieces from the Manufacture de Vincennes and the Manufacture royale de porcelaine de Sèvres. Ephrussi de Rothschild had particularly unusual specimens set up in the room. Rare blue lapis lazuli porcelains can be found in a display case. They are surrounded by pieces from one of the most famous productions from Sèvres, called “aux partitions musicales”. On the mantelpiece there is a clock made of pink “à la du Barry” porcelain.

The majority of the porcelains in this room come from the Vincennes Manufactory. You can admire the “vases of three ages”, extremely rare and belonged to Béatrice’s father or an antique urn, another marvel of the collection. A vase belonging to Madame de Pompadour is on display in the adjoining adjoining room.

The villa was designed by the French architect Aaron Messiah, and constructed between 1905 and 1912 by Baroness Béatrice de Rothschild (1864–1934). A member of the Rothschild banking family and the wife of the banker Baron Maurice de Ephrussi, Béatrice de Rothschild built her rose-colored villa on a promontory on the isthmus of Cap Ferrat overlooking the Mediterranean Sea.

The Baroness filled the mansion with antique furniture, Old Master paintings, sculptures, objets d’art, and assembled an extensive collection of rare porcelain. The gardens are classified by the French Ministry of Culture as one of the Notable Gardens of France.

The Villa is a collector’s residence, where porcelain manufactured by the royal Manufactory of Sèvres stands beside Gobelins tapestries, paintings by the masters and rare items of furniture. The nine gardens are decorated with columns, waterfalls, ornamental ponds, flowerbeds and rare species of trees.

On her death in 1934, the Baroness donated the property and its collections to the Académie des Beaux Arts division of the Institut de France and it is now open to the public. The role of the Académie des Beaux-Arts is to defend and highlight France’s artistic heritage and promote its growth in all its forms of expression.