One hundred years ago, the world in the 1910s changed the lives of people with the beginning of a new era of scientific and technological breakthroughs, and sought new things, and the fashion world was turning as if it were in response I was facing The liberation from Corset, the greatest revolution in clothing, produces modern clothing, and the development of printing and publishing technology drives the appearance of fashion magazines, and the mode information of Europe and the United States is rapidly transmitted to the world. While westernization in the city progressed, the distinctive costumes of the area were made to the trend of the area, and there were still areas that continued to dress.

In this exhibition, the museum holds 100 valuable photographs that capture the diverse image of people who were fortunately recorded by National Geographic, which began to quickly incorporate photographs into the magazine, just before globalization of clothing advances. The miracle encounter of the costumes and fashion photographs of the same world, the air of the era that formed the feature of each region, the sense of the dress that the fine handwork stands out, the fashionable full of diversity 100 years ago Enjoy the world. 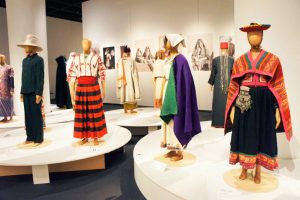 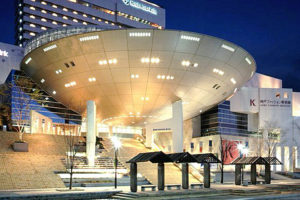 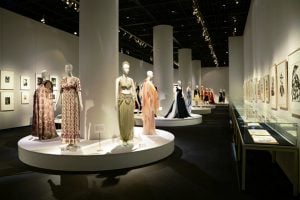 Exhibited about 100 documentary photographs including those not published in the magazine from the 1900s to the early 1930s, among the huge archives accumulated. You will see a part of it in life size. Enjoy the world of expanding photography, with documentary and fashion photography, and the magazines that contain them.

We display designer dresses that made a name for themselves in the West in the same period as the world’s costumes of the 1890s-1940s. One hundred years ago, when it took longer to move people and information, fashion trends seem to be a little by little, but certainly affecting and alike in neighboring countries / regions.

Kobe Fashion Museum
Kobe Fashion Museum was established as the first public museum specializing in fashion in Japan on April 25, 1997. Its objective is to find the answer to why fashion has been so appealing to mankind since our inception.

History
The Kobe Fashion Museum is Japan’s first public sector museum specializing in fashion. Opened on April 25, 1997, it symbolizes Kobe as the City of Fashion. Aiming to promote fashion-related industry and culture, it also functions as a facility for training and education, publicity and communication, and for attracting visitors.

Collection
The collection consists of more than 9,000 Western costumes from the 18th-20th century, and folk costumes from over 70 countries. Additionally, the museum holds 2000 accessories, 1500 fashion plates, 2000 fashion photos, and over 4000 movie posters. The library holds an enormous amount of books, magazines, and videos.

18th century collection
This collection focuses on European women’s clothing of the 18th century, but also includes menswear, fans, and accessories. Robe à la française is a type of women’s gown that was worn throughout the 18th century. Attached to the chest is a panel of fabric known as a stomacher. The neck and front panels are decorated with frills and fly fringes.

19th century collection
This collection focuses on 19th century European women’s clothing, but also includes men’s suits, hats and shawls, reticules and other accessories. There are examples of day dresses and evening dresses in romantic style, characterized by bell-like silhouette skirts; crinoline style, which is worn with underwear called crinolines to provide volume to the skirt; and bustle style, which uses a frame attached below the waist to give volume at the rear.

Folk costumes and ceremonial robes
The museum also has 19th century and 20th century costumes and decorative articles from many different regions. They include examples of a long kurta worn by Maharajah class men in India, and costumes such as embroidered semi-formal court robes worn by the Qing Dynasty royal family in China, employing unparalleled hand work.

20th century collection
This collection includes garments by some of the top designers of the 20th century, from Callot Soeurs, Paul Poiret and Mariano Fortuny, Gabrielle Chanel, Elsa Schiaparelli and Christian Dior to Alexander McQueen and Martin Margiela.

Fashion Plate
The museum possesses about 1,500 fashion plates from publications such as Gazette du bon ton and Modes et manières d’aujourd’hui.
There are over 300 mannequins, broadly categorized into three types: Mannequins made to suit Western historical dress of the 18th and 19th centuries, mannequins suitable for 20th century and later clothing, and wooden mannequins made for folk costumes.

Mannequins
There are over 300 mannequins, broadly categorized into three types: Mannequins made to suit Western historical dress of the 18th and 19th centuries, mannequins suitable for 20th century and later clothing, and wooden mannequins made for folk costumes.

18th–19th century mannequins
To create mannequins appropriate for clothing of different periods and styles, over 200 garments from the collection were measured many times to provide the detailed data needed for designing mannequins that could be shared by as large a range of clothing as possible. Hairstyles and makeup are selected so as to best reflect the atmosphere of each period and location.

Modern mannequins
The modern mannequins, they did not need as much specialized specifications as the x above, but the museum created 50 mannequins while keeping in mind the beauty and quality needed to represent the museum. The mannequins have blue skin since they were originally planned to be displayed on a blue stage.

Styling
A mannequin needs to be able to appear in different poses and offer the opportunity to be styled with accessories on its ears, nose, arms, and legs.

How are the mannequins made?
The mannequins are made of natural solid wood from Thai grown silk trees which made the heaviest mannequin weigh over 100 kg.

Material
We will exhibit the properties and texture of natural materials such as “silk” “hair” “cotton” “hemp” etc. and new materials to be developed daily using samples.

Restoration
Costumes restored by the collaborative project with Osaka Shoin Women’s University will be exhibited. The reconstructed material that accurately reproduced the original can be touched in practice, and you can check the structure, technique and so on.