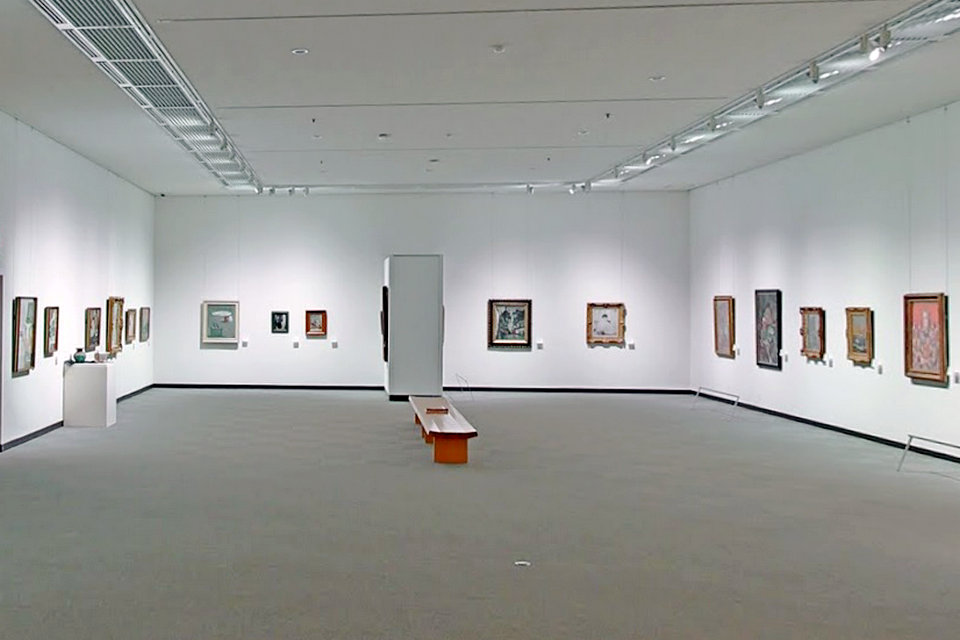 The Mie Prefectural Museum of Art, which opened as the first full-scale art museum in the Chubu and Tokai districts, has a rich collection of modern Japanese Western paintings.

2. Europe in the 1920s
In 1922, Nakazawa, who had been studying in Europe for about half a year, was already 48 years old. However, at the time of the end of World War I, Europe was a good era in which culture flourished mainly in Paris, and hundreds of artists from Japan visited the area.

3． Still life and motifs
Still life is one of the important genres of painting. It can be said that the selected object is closely connected to the painter’s personality. This time, the real motif donated by the bereaved family and used by Kohei Suzuki will also be exhibited.

About Luini replication
From the middle of the Meiji era to the Taisho era, Nakazawa replicated the Belgian painter Rodolf WYTSMAN. In Japan, there were almost no western works to set as models, and since the printing duplication technology was still immature, even the local reproductions by Kiyoki Kuroda and Keiichiro Kume, etc. It was useful as It is believed that Ruini’s copy of the nativity figure was reproduced again by Nagahara based on the copy taken at the Louvre Museum in Kuroda.

Room 2: Western art before the 19th century-focusing on precise expression

Soga Shohaku
Soga Shohaku (曾我蕭白 1730 – January 7, 1780) is a mid-Edo era painter. He called himself a barnfoot eaves. While boasting high ink painting skills, he is described as a fantastic painter with a powerful style that surprises viewers.

Xiao Bai’s features are his detailed and precise depiction of parts and his accurate and bold grasp of the subject’s dynamics. The bold spatial comprehension in the composition and the vivid coloring supported by the various originalities that have become familiar with the properties of pigments together produce intense instability, fascinating and fascinating the viewer. Xiao Bai’s painting, which had been regarded as a painter of heresy and madness in the painting history of the Edo period, painted traditional themes such as hermits, Chinese lions, and Chinese facts using the same traditional ink painting technique. Expressions such as drawing the subject ugly and plainly are unconventional and devastating, and there is no way to give a strong impression of stroking the viewer’s nerves.

At that time, Xiao Bai’s work was accepted by the general public, though not as much as Maruyama Okyo, Ike Taiga, and Yosaebu Village. The fact that Xiao Bai’s many forgeries not only stimulated the motivation of the forgers but also proved that Xiao Bai’s popularity was high. Although the evaluation was low after the Meiji era, the fact that it was featured in Nobuo Tsuji’s “ Genealogy of Bizarre Art ” serialized in the Art Techo magazine in 1968 triggered a distinctive distinction in the history of painting in the Edo period. In recent years, he has been drawing attention again as a painter.

In addition, it is pointed out that Xiao Bai needs to conduct research from a more diverse perspective, based on his reflection that he emphasized only the aspects of “heresy” and “unusual”, and that he had created a biased evaluation.

Forgotten in the Meiji era, many works were lost or damaged. Many of these works were brought to the Museum of Fine Arts by William Sturgis Bigelow, which now owns the largest Xiao Bai collection.

Tsukisen
Tsukisen (月僊 February 16, 1741 – February 25, 1809)) is a painting monk from the middle to late Edo period. . The popular name is Tanke. The name is Xuan Rui and Moto Rui. The character is Tamari.

Born in a miso shop in Nagoya, Owari. At the age of seven, he gained the name of Gen Rui and became a monk of the Jodo sect. As a teenager, he left Edo and entered Zojoji Temple, where he was referred to as the honorable retirement month of Zojoji 46th. Alongside the Buddhist monastery, he studied painting at Sakurai Yukikan, who was self-proclaimed as the “12th generation of Sesshu,” who joined the Unya group. After that, he lived in Chion-in and studied under Okyo Maruyama. In addition, influenced by Yosaebu Village, he further learned from various groups and established his own style of painting.

It specializes in landscapes and people, and is characterized by the loneliness of the figures. No matter who was begged, he always got the paintings, so he was known as “ Beggar Tsukisen ”, but “ Activities such as paying the paintings to the government and saving the poor with their interests (Wolsenkin) ” Was. Being pleaded with by the chief of Chion-in, he entered the mountain in 1774 to rebuild Jakushoji Temple in Ujiyamada, Ise (currently Ise City, Mie Prefecture). Many people slandered because the names of the paintings increased and the people who begged for paintings were constantly growing, and it was enormous to accumulate a great deal of wealth and further devour money. However, he later built a temple temple and gate, purchased a scripture, put it in a storehouse, and showed how he worked on renovating mountain roads, conducting rice in the Tenmei famine, the Miyagawa bridge, and helping victims of the Ise great fire during the cultural year. Have all begun to submit their merit. Willing to face death, deposit 1,500 cars to the magistrate’s office for salvation of the eternity. His works have been left at Kyoto Myoho-in, Shoko Ritsu-ji and Jakushoji Temples in Okazaki City, Aichi Prefecture, and Mie Prefectural Museum of Art. There are Anjo Tachihara, Ayodo Dozen, and Muramatsu Yoshihiro under his gate.

Mie Prefectural Museum of Art
Mie Prefectural Art Museum is an art museum located in Tsu City, Mie Prefecture. The museum opened in 1982 as the first full-scale art museum in the Chubu and Tokai districts. In 2003, the Yanagihara Yoshida Memorial Hall was opened. The collection of modern Japanese Western paintings is substantial.

The hallmark of the museum is that it is not just an ivory tower, it always seeks to work with society.

The most noticeable result of museum activity is in exhibiting works. The real value of a museum, in particular, is due to its permanent exhibits. The permanent exhibition in the main building is divided into four periods a year, aiming to systematically capture the flow of art from the present to the present, with a focus on modern Japanese painting. The special exhibition room holds independent exhibitions based on unique themes and joint exhibitions from a broader perspective.