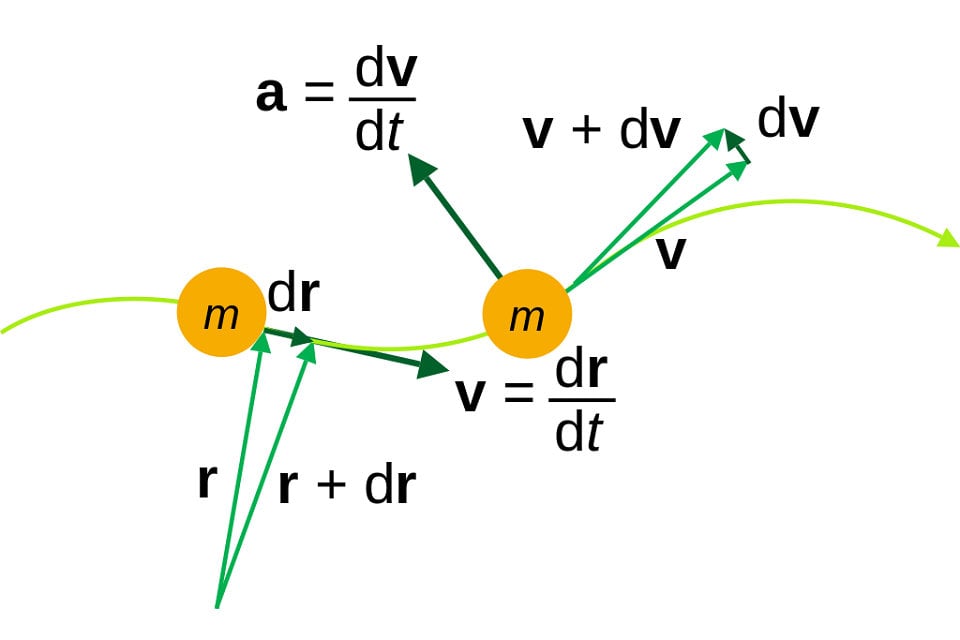 are the Cartesian coordinates and

are the unit vectors along the

coordinate axes, respectively. The magnitude of the position vector

gives the distance between the point

The trajectory of a particle is a vector function of time,

, which defines the curve traced by the moving particle, given by

where the coordinates xP, yP, and zP are each functions of time.

Velocity and speed
The velocity of a particle is a vector quantity that describes the direction of motion and the magnitude of the motion of particle. More mathematically, the rate of change of the position vector of a point, with respect to time is the velocity of the point. Consider the ratio formed by dividing the difference of two positions of a particle by the time interval. This ratio is called the average velocity over that time interval and is defined as Velocity=displacement/time taken

where ΔP is the change in the position vector over the time interval Δt.

In the limit as the time interval Δt becomes smaller and smaller, the average velocity becomes the time derivative of the position vector,

The speed of an object is the magnitude |V| of its velocity. It is a scalar quantity:

where s is the arc-length measured along the trajectory of the particle. This arc-length traveled by a particle over time is a non-decreasing quantity. Hence, ds/dt is non-negative, which implies that speed is also non-negative.

where ΔV is the difference in the velocity vector and Δt is the time interval.

which is the difference between the components of their position vectors.

If point B has position components

then the position of point A relative to point B is the difference between their components:

which is the difference between the components of their velocities.

If point A has velocity components

and point B has velocity components

then the velocity of point A relative to point B is the difference between their components:

Alternatively, this same result could be obtained by computing the time derivative of the relative position vector RB/A.

In the case where the velocity is close to the speed of light c (generally within 95%), another scheme of relative velocity called rapidity, that depends on the ratio of V to c, is used in special relativity.

The acceleration of one point C relative to another point B is simply the difference between their accelerations.

which is the difference between the components of their accelerations.

If point C has acceleration components

and point B has acceleration components

then the acceleration of point C relative to point B is the difference between their components:

Alternatively, this same result could be obtained by computing the second time derivative of the relative position vector PB/A.

Assuming that the initial conditions of the position,

are known, the first integration yields the velocity of the particle as a function of time.

Additional relations between displacement, velocity, acceleration, and time can be derived. Since the acceleration is constant,

can be substituted into the above equation to give:

A relationship between velocity, position and acceleration without explicit time dependence can be had by solving the average acceleration for time and substituting and simplifying

where ∘ denotes the dot product, which is appropriate as the products are scalars rather than vectors.

The dot can be replaced by the cosine of the angle

In the case of acceleration always in the direction of the motion, the angle between the vectors (

can be any curvaceous path taken as the constant tangential acceleration is applied along that path, so

This reduces the parametric equations of motion of the particle to a cartesian relationship of speed versus position. This relation is useful when time is unknown. We also know that

is the area under a v, t graph. We can take

is the width and

is the height. In this case

here is different from the acceleration

). This means that the bottom area is

. Now let’s find the top area (a triangle). The area of a trangle is

is the base and

is the height.In this case,

results in the equation

results in the equation

. This equation is very useful when the final velocity

where i, j, and k are the unit vectors along the X, Y and Z axes of the reference frame F, respectively.

Consider a particle P that moves only on the surface of a circular cylinder R(t)=constant, it is possible to align the Z axis of the fixed frame F with the axis of the cylinder. Then, the angle θ around this axis in the X–Y plane can be used to define the trajectory as,

The cylindrical coordinates for P(t) can be simplified by introducing the radial and tangential unit vectors,

and their time derivatives from elementary calculus:

where R is constant in the case of the particle moving only on the surface of a cylinder of radius R.

In general, the trajectory P(t) is not constrained to lie on a circular cylinder, so the radius R varies with time and the trajectory of the particle in cylindrical-polar coordinates becomes:

Where R, theta, and Z might be continuously differentiable functions of time and the function notation is dropped for simplicity. The velocity vector VP is the time derivative of the trajectory P(t), which yields:

Similarly, the acceleration AP, which is the time derivative of the velocity VP, is given by:

acts toward the center of curvature of the path at that point on the path, is commonly called the centripetal acceleration. The term

is called the Coriolis acceleration.

Constant radius
If the trajectory of the particle is constrained to lie on a cylinder, then the radius R is constant and the velocity and acceleration vectors simplify. The velocity of VP is the time derivative of the trajectory P(t),

Planar circular trajectories
A special case of a particle trajectory on a circular cylinder occurs when there is no movement along the Z axis:

where R and Z0 are constants. In this case, the velocity VP is given by:

is the angular velocity of the unit vector eθ around the z axis of the cylinder.

The acceleration AP of the particle P is now given by:

are called, respectively, the radial and tangential components of acceleration.

Point trajectories in a body moving in the plane

These homogeneous transforms perform rigid transformations on the points in the plane z=1, that is on points with coordinates p=(x, y, 1).

Pure translation
If a rigid body moves so that its reference frame M does not rotate (∅=0) relative to the fixed frame F, the motion is called pure translation. In this case, the trajectory of every point in the body is an offset of the trajectory d(t) of the origin of M, that is:

Thus, for bodies in pure translation, the velocity and acceleration of every point P in the body are given by:

where the dot denotes the derivative with respect to time and VO and AO are the velocity and acceleration, respectively, of the origin of the moving frame M. Recall the coordinate vector p in M is constant, so its derivative is zero.

In what follows, attention is restricted to simple rotation about an axis of fixed orientation. The z-axis has been chosen for convenience.

This allows the description of a rotation as the angular position of a planar reference frame M relative to a fixed F about this shared z-axis. Coordinates p = (x, y) in M are related to coordinates P = (X, Y) in F by the matrix equation:

is the rotation matrix that defines the angular position of M relative to F as a function of time.

If the point p does not move in M, its velocity in F is given by

It is convenient to eliminate the coordinates p and write this as an operation on the trajectory P(t),

is known as the angular velocity matrix of M relative to F. The parameter ω is the time derivative of the angle θ, that is:

The acceleration of P(t) in F is obtained as the time derivative of the velocity,

is the angular acceleration matrix of M on F, and

The description of rotation then involves these three quantities:

Angular position: the oriented distance from a selected origin on the rotational axis to a point of an object is a vector r(t) locating the point. The vector r(t) has some projection (or, equivalently, some component) r⊥(t) on a plane perpendicular to the axis of rotation. Then the angular position of that point is the angle θ from a reference axis (typically the positive x-axis) to the vector r⊥(t) in a known rotation sense (typically given by the right-hand rule).

The angular velocity is represented in Figure 1 by a vector Ω pointing along the axis of rotation with magnitude ω and sense determined by the direction of rotation as given by the right-hand rule.

Point trajectories in body moving in three dimensions
Important formulas in kinematics define the velocity and acceleration of points in a moving body as they trace trajectories in three-dimensional space. This is particularly important for the center of mass of a body, which is used to derive equations of motion using either Newton’s second law or Lagrange’s equations.

Position
In order to define these formulas, the movement of a component B of a mechanical system is defined by the set of rotations [A(t)] and translations d(t) assembled into the homogeneous transformation [T(t)]=[A(t), d(t)]. If p is the coordinates of a point P in B measured in the moving reference frame M, then the trajectory of this point traced in F is given by:

This equation for the trajectory of P can be inverted to compute the coordinate vector p in M as:

This expression uses the fact that the transpose of a rotation matrix is also its inverse, that is:

Velocity
The velocity of the point P along its trajectory P(t) is obtained as the time derivative of this position vector,

The dot denotes the derivative with respect to time; because p is constant, its derivative is zero.

This formula can be modified to obtain the velocity of P by operating on its trajectory P(t) measured in the fixed frame F. Substituting the inverse transform for p into the velocity equation yields:

The matrix [S] is given by:

is the angular velocity matrix.

Multiplying by the operator [S], the formula for the velocity VP takes the form:

where the vector ω is the angular velocity vector obtained from the components of the matrix [Ω]; the vector

is the position of P relative to the origin O of the moving frame M; and

is the velocity of the origin O.

The acceleration of a point P in a moving body B is obtained as the time derivative of its velocity vector:

This equation can be expanded firstly by computing

The formula for the acceleration AP can now be obtained as:

where α is the angular acceleration vector obtained from the derivative of the angular velocity matrix;

is the relative position vector (the position of P relative to the origin O of the moving frame M); and

is the acceleration of the origin of the moving frame M.