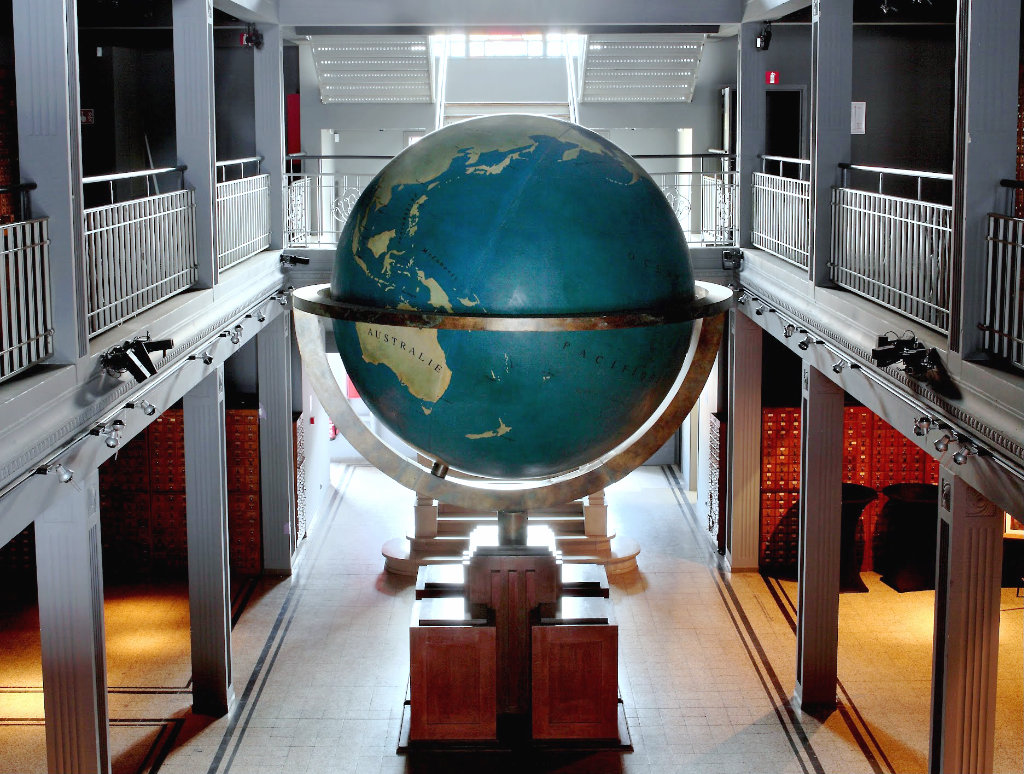 The Mundaneum is a non profit organisation based in Mons, Belgium that runs an exhibition space, website and archive which celebrate the legacy of the original Mundaneum established by Paul Otlet and Henri La Fontaine in the early twentieth century.

The origins of the Mundaneum date back to the late 19th century. Created by two Belgian lawyers, Paul Otlet (1868-1944), father of documentation, and Henri La Fontaine (1854-1943), Nobel Peace Prize laureate, the project aimed to collect all knowledge and to classify it according to the Universal Decimal System they had developed. Today, their visionary enterprise marks them as pioneers of the World Wide Web and the Internet. Next to the personal archives of the founders, books, small documents, posters, post cards and glass plates, the Mundaneum preserves the 12 million index cards of the Universal Bibliographic Repertory (Unesco “Memory of the World” Heritage), the Press International Museum and specialised funds on pacifism, anarchism, and feminism. Combining history and modern day perspectives, the Mundaneum’s fascinating exhibition space takes you on an incredible journey to the centre of the information universe.

The Mundaneum Archive Center retains some 6 km of documents. In addition to the personal papers of the founders, Paul Otlet and Henri La Fontaine, and the collections of newspapers, posters, postcards, glass plates and small documents gathered by them or their successors, Archives on three main themes: pacifism, anarchism and feminism.

The Mundaneum was created in 1910, following an initiative begun in 1895 by Belgian lawyers Paul Otlet and Henri La Fontaine, as part of their work on documentation science. Otlet first called it the Palais Mondial, meaning “world palace” in English, and it occupied the left wing of the Palais du Cinquantenaire, a government building in Brussels. It aimed to gather together all the world’s knowledge and classify it according to a system they developed called the Universal Decimal Classification. Otlet and La Fontaine organized an International Conference of International Associations which was the origin of the Union of International Associations (UIA).

The Mundaneum has been identified as a milestone in the history of data collection and management, and (somewhat more tenuously) as a precursor to the internet.

Otlet regarded the project as the centrepiece of a new ‘world city’—a centrepiece which eventually became an archive with more than 12 million index cards and documents. Some consider it a forerunner of the Internet (or, perhaps more appropriately, of systematic knowledge projects such as Wikipedia and WolframAlpha) and Otlet himself had dreams that one day, somehow, all the information he collected could be accessed by people from the comfort of their own homes.

The International Centre organises collections of world-wide importance. These collections are the International Museum, the International Library, the International Bibliographic Catalogue and the Universal Documentary Archives. These collections are conceived as parts of one universal body of documentation, as an encyclopedic survey of human knowledge, as an enormous intellectual warehouse of books, documents, catalogues and scientific objects. Established according to standardised methods, they are formed by assembling cooperative everything that the participating associations may gather or classify. Closely consolidated and coordinated in all of their parts and enriched by duplicates of all private works wherever undertaken, these collections will tend progressively to constitute a permanent and complete representation of the entire world.

The Mundaneum was originally housed at the Palais du Cinquantenaire in Brussels (Belgium). Otlet commissioned architect Le Corbusier to design a Mundaneum project to be built in Geneva, Switzerland in 1929. Although never built, the project triggered The Mundaneum Affair, a theoretical argument between Corbusier and Czech critic and architect Karel Teige.

In 1933, with Otlet’s agreement, Otto Neurath founded the Mundaneum Institute as a branch in The Hague in 1933, which became central to his activities when he moved to the Netherlands as a refugee following the defeat of the Austrian Social Democratic Party in the Austrian Civil War. In 1936 the Mundaneum Institute launched the International Encyclopedia of Unified Science.

When Nazi Germany invaded Belgium in 1940, the Mundaneum was replaced with an exhibit of Third Reich art, and some material was lost.

The Mundaneum was reconstituted in a large but decrepit building in Leopold Park. It remained there until it was forced to move again in 1972.

The Mundaneum has since been relocated to a converted 1930s department store in Mons (Wallonia), where the existing museum opened in 1998.