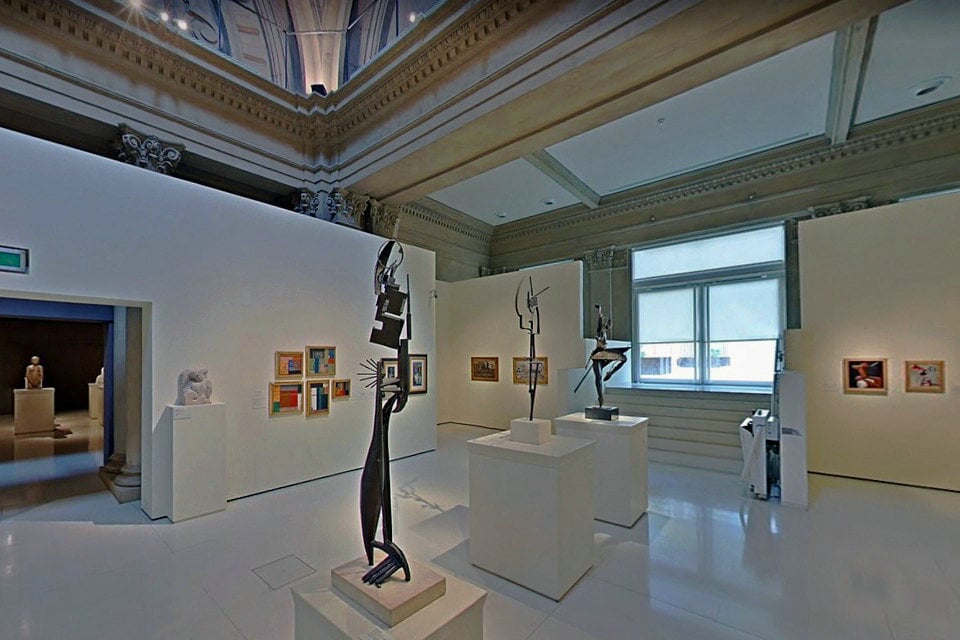 By the first years of the 20th century, various cultural and artistic sectors all over Europe were reacting against the end-of-the-century styles –Art Nouveau, Modernisme, etc.–, which they accused of being decorativist and irrational and of lacking form and structure. This reaction came about in two ways: first, as a return to classicism, and secondly, through the different avant-gardes that turned a critical eye on the function of art and the role of the artist in an urban, industrialised society in which the prestige of the utopia of bourgeois progress was nevertheless being brought into question by the wars and revolutions taking place, no longer in remote colonies but in Europe itself. Following the horrors of the First World War, under the slogan ‘return to order’, a new reaction took place, this time against the avant-gardes and very often actually from inside them. Against the radical experimentation with techniques and materials of previous years –collage, assemblage, etc.–, and against more abstract tendencies, there was a defence of the return to traditional trades and a new realism which in fact would become the object of various interpretations.

National Art Museum of Catalonia reopened the first floor of the museum, dedicated to Modern Art, after a process of renovation of the collections, the galleries and the museography. The new display offers a new critical and complex narrative that avoids the mere succession of styles and names and includes all the artistic productions of the period:sculpture and painting, drawings and prints, photography, poster work, cinema, architecture and the decorative arts. Now there is a greater presence of elements that will help you to understand the social, historic and artistic context, and which highlight the international connections of artists and movements of Barcelona and Catalonia. The new display goes for the first time as far as the 1950s, including the movement Dau al Set (the first post-World War II artistic movement in Catalonia).

Modern Art permanent exhibition is divided into four sections and an epilogue: The Rise of the Modern Artist, Modernisme(s), Noucentisme(s), Art and Civil War, and The Avant-garde Revival of the Post-War Years.

Noucentisme and Mediterraneanism
In France and in southern European countries like Catalonia, the return to classicism took on a special tone in what became known as Mediterraneanism. The idea that the Graeco-Latin Mediterranean was the true cradle of civilisation and that the luminosity, harmony and rhythm associated with classicism are qualities that run through society, from its elites to its humblest classes, constituted a utopia of social pacification with which to oppose the violent and unruly reality of society. Sculpture, which was directly associated with an idealised image of Antiquity and was the art form par excellence, became the favourite medium of the time.

Galeries Laietanes
Founded in 1915 by the merchant Santiago Segura, this was one of the centres for the diffusion of Modernisme, not only thanks to the exhibitions held there, but also through publications and events of all sorts. But its main interest lay in its cellar, a meeting-place for enthusiasts and artists, with mural decoration by Xavier Nogués. You might say that the Galeries Laietanes were to Noucentisme what Els Quatre Gats was to Modernisme, although the differences speak for themselves. Whereas Els Quatre Gats was open to the coming and going of modern life, here we have a cellar through whose painted arcades we glimpse an idealised country that is calm and congenial.

Avant-garde
In many aspects, the avant-garde was a continuation of bohemia, although it can be distinguished by its critical awareness of the role of the artist in intellectual work and in the collective production of its day. In its most radical versions, it saw the artist as a producer and a leader of masses, but there were also avant-gardes whose principal concerns were limited to an internal renovation of art itself. Nevertheless, away from the main centres of the European avant-garde –Paris, Berlin, Moscow–, in cities like Barcelona, the avant-garde revealed itself in more restrained and eclectic attitudes and its radicalism was replaced by an overall aspiration for modernity.

Realism
Although the predominant discourse on the art of the 20th century has made abstraction its main topic, the fact is that modernity is also expressed through figurative art and realism. This happens either from positions that are in favour of renovation or clearly avant-gardist –the case of magic realism, New Objectivity or Social Realism–, or from reactionary postures which, under the anti-avant-garde slogan of a ‘return to order’, argue for the recovery of an art with ties to contemporary subject matter but subjected to academic rules.

Modern life 1. Photography, film., advertising
Many of the aspirations of the avant-garde were realised in the daily life of mass society. The new means of transport and diffusion –illustrated publications, newsreels, radio– and the advent of ubiquitous publicity, from the pages of magazines to illuminated advertising signs in cities, reached everywhere. The fact that the most radical techniques of the avant-gardes –collage, photomontage, etc.– were assimilated into advertising and ‘delivered’ to the masses in this form is a metaphor of how ‘modern life’ stifles conflict.

New art and Surrealism
By the 1930s, modern art or new art had been assimilated as something normal and, as had happened with the 1900 styles, its commonplace forms impregnated the whole of society through what became known as Art Deco or ‘contemporary lyricism’. The different shades of Surrealism rebelled against this situation and demanded a return to a supposedly more genuine art whose motives lay not in the logic of ‘modern life’ but in the primitive, the subconscious and dreams.

Modern life 2. Experimentalism and the people’s media
The new media became popular in the 1930s, thanks not only to commercial productions but also to the invention of relatively cheap and easy to use still and film cameras conceived for home use. Artists, photographers, film-makers and enthusiasts –photography and amateur film clubs blossomed in towns and cities all over Europe– turned these media into a playground for formal experimenting that worked as an interesting system of communicating vessels connecting commercial, popular and avant-garde aspects.

Monumental decorative art
Though much forgotten by official history, monumental decoration nevertheless existed in the period of the avant-gardes. For one thing, avant-garde artists brought new life to mural art with techniques like collage or photomontage, especially in Fascist Italy and Soviet Russia; for another, large decorative series were designed for churches, official buildings or private mansions and produced using traditional techniques and conservative forms inspired by Baroque frescos.

The MNAC is a consortium with its own legal personality constituted by the Generalitat de Catalunya, the Barcelona City Council and the General State Administration. In addition to the public administrations, individuals and private entities collaborating with the administration are represented on the museum’s board of trustees.

The main headquarters are located in the National Palace of Montjuïc, opened in 1929 on the occasion of the International Exhibition. Three other institutions are also part of the museum as a whole: the Víctor Balaguer Museum Library in Vilanova i la Geltrú, the Garrotxa Museum in Olot and the Cau Ferrat Museum in Sitges, whose management is independent and its ownership is based on the respective councils.