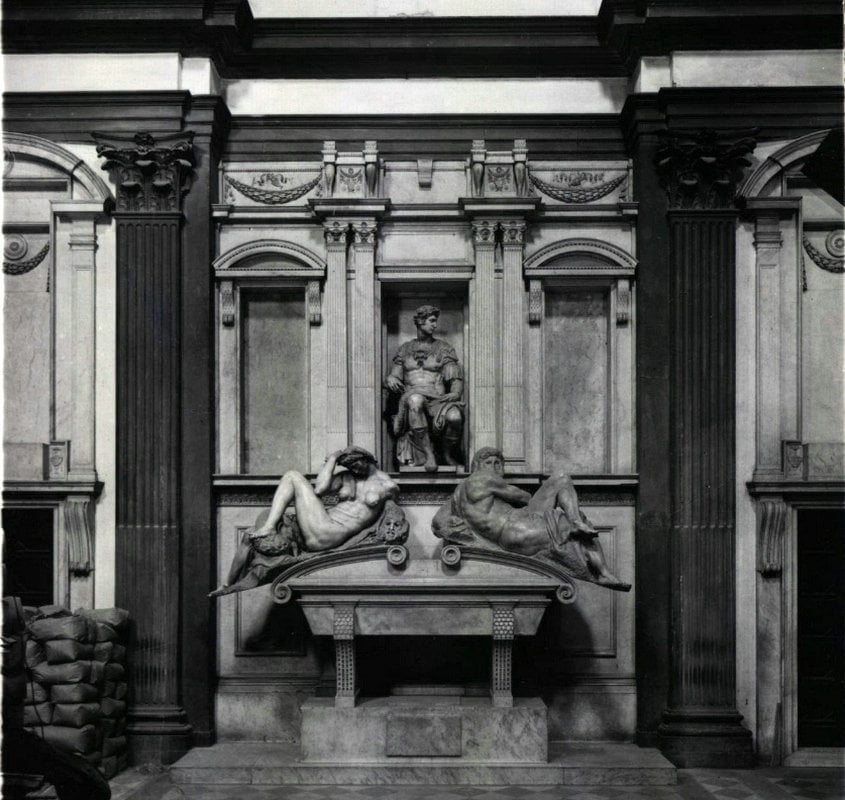 An art-historical photo campaign, during WWII, showcases Michelangelo’s sculptures in the Medici Chapel as they have never been seen before

In the middle of the Second World War – and precisely because of this war – Friedrich Kriegbaum who was the director of the German Institute of Art History in Florence saw and seized a unique opportunity. Kriegbaum had long been working on a monograph on 16th century sculpture in Tuscany. And now in 1941, the Soprintendenza decided to dismantle Michelangelo’s world-famous sculptures from the Cappella Medicea in the sacristy of the Church of San Lorenzo in Florence, in order to protect them from the imminent danger of air raids. This opportunity is not to be missed by Kriegbaum who, together with the responsible Italian authorities, initiates an elaborate photographic campaign for the comprehensive documentation of Michelangelo’s marble sculptures. This is the first publication of the complete set. Friedrich Kriegbaum had not been able to use the photographs for his book. Tragically, he was killed in the first British bomb attack on Florence on 25.9.1943. It was Ludwig Heinrich Heydenreich, his successor who had been appointed acting director of the Florentine Institute, to whom Kriegbaum’s family entrusted his scientific papers. Along with these papers, the photographs of Michelangelo’s sculptures came to the Zentralinstitut für Kunstgeschichte in Munich after the war: Heydenreich had been appointed as its founding director. On the initiative of Heydenreich, two of Kriegbaum’s lecture manuscripts were published on the tenth anniversary of his death in the Munich Yearbook for Fine Arts (volume III / IV). The prints, published in this online exhibit, show the photographs as found in the papers of Friedrich Kriegbaum.

Michelangelo Buonarotti (1475-1564) sculpted the decoration of the Medici Chapel – including this figure – between 1524 and 1533. To protect the sculptures from air raids, the decoration was dismantled in 1941. The displacement permitted spectacular shots of the unfinished piece from very unusual perspectives.

Lorenzo de’ Medici – the Duke of Urbino – had died in 1519. Michelangelo decorated his tomb with an idealized figure of the deceased and the allegories of “Dusk” and “Dawn”.

Giuliano de’ Medici – the Duke of Nemours – had died three years before his brother, in 1516. Here, the main figure is accompanied by the allegories of “Day” and “Night”.