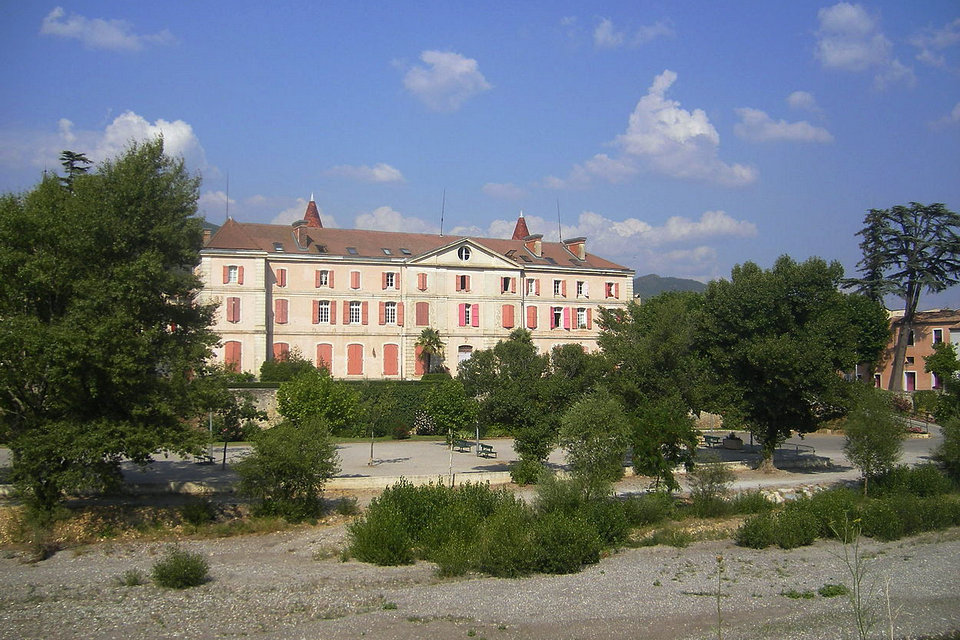 Malijai is a French commune, located in the department of Alpes-de-Haute-Provence in the Provence-Alpes-Côte d’Azur region. Farmers in the town are engaged in mixed farming or raising sheep. The cultivation of the olive tree has been practiced in the town for centuries, while being limited to certain slopes. An aggregates quarry is active in various construction sectors.

Malijai is crossed by the national road 85 known as “Route Napoléon”. The village is located at 428 m above sea level, on the right bank of the Bléone.The Bléone river, which forms part of the commune’s western border, then flows west through the northern part of the commune.

History
The locality appears for the first time in the texts in 1272 (Malijacio). Its name comes either from the Latin Male jactus, badly located or from the Occitan mal i jai, sleeps badly, to designate a poor quality dwelling, perhaps an old inn. In Gallic times the valley of the “Bléaune” was inhabited by the Bléontici, with coarse and very valiant customs. The origins of Malijai are still unclear, but in 1060, during a donation of land to the monastery of Saint-Victor in Marseille, the village of Malijai does not yet exist. Two communities, one on the heights of the right bank of the Bléone called Bézaudun and one on the heights of the left bank under the name of Bastide Blanche de Villeneuve are surely the precursors of our community.

In the 12th century, the Saint-Bonnet, recently passed away, belonged to the abbey of Saint-André Villeneuve-lès-Avignon, who perceived incomes. The church of Bézaudun was donated by Pierre de Volonne to the priory of L’Escale, dependent on the abbey of Saint-Victor in Marseille in 1060. It was then ceded to the abbey of Chardavon. The community of Malijai came under the bailiwick of Digne.

Around 1250 a new community, which the texts of the 13th and 14th centuries call Malijacio or Villefranche, was reconstituted along the right bank of the Bléone at its current location. The name of Villefranche (Villa francha) reflects the idea of a “new town”. The new village approached the ancient Digne – Sisteron route.

The death of Queen Jeanne I re opened a crisis of succession to head the county of Provence, the cities of Aix Union (1382-1387) supporting Charles of Durazzo against Louis I of Anjou. The lord of Malijai, Guigon Flotte, joined the Carlist camp as soon asApril 1382, then when Sisteron submits to the Angevin camp, he follows the movement and pays homage to the November 30, 1385.

During the revolution, Malijai became head of the canton and had a patriotic society. On May 13, 1792, the castle was attacked by the peasants: the guns were taken, the lead gutters were melted down to make bullets and all the ironwork torn off. On the night of March 4 to 5, 1815, Napoleon I, on his return from Elba Island, stopped at Malijai, while Cambronne took care of the resistance of Sisteron because from its citadel, the city could cut the road to Paris. He rested in the castle on an armchair then ended that night in the middle of his troops encamped in the park.

La Bléone caused catastrophic floods in 1826 and especially in 1860. The coup d’état of December 2, 1851 committed by Louis-Napoléon Bonaparte against the Second Republic provoked an armed uprising in the Basses-Alpes.

In WWII, The liberation of Malijai is marked by the passage of a column of the 36 th division infantry (US), the 19 August 1944, from Riez by Valensole and Mees to release Digne. It is stopped by the German resistance at the entrance to the village. The bridge over the Bléone, was chosen by the Wehrmacht to install a lock, which jumps after short fighting.

In 1974, the commune of Chénerilles was attached to Malijai. Until the middle of the 20th century, the vine was cultivated and Chénerilles Malijai. Several dozen hectares produced a wine intended for home consumption and sale on local markets. This culture is now abandoned.

The castle
The castle is located at the entrance of the village, between it and the Bléone. It was built at the end of the 1760s and at the beginning of the 1770s by Pierre Vincent Noguier, who had bought the seigneury in 1759. Its facade is framed by two round towers, and surmounted by a pediment, repeated on the rear facade, Bléone side. The windows on both floors are arched. Its ground floor is classified as a historical monument for the quality of its plasterwork, representative of the Louis XV and Louis XVI styles.

Melchior de Mazargues, adviser to the parliament of Aix, bought the Seigneurie de Malijai in 1632. He immediately had a castle built, between 1635 and 1643. Bought in 1766 by Pierre-Vincent Noguier, it took one more floor and saw its decoration interior completely redone. Large vestibule, huge bright reception rooms overlooking the terraces and flowerbeds. Malijai Castle is made up of a quadrangle flanked on the north side by two round towers topped with pepper shakers or snuffers, a triangular pediment, a long sober and elegant main building with large arched windows, it is at pure classic style sure. Its ground floor is classified as a historical monument for the quality of its plasterwork, representative of the Louis XV and Louis XVI styles (classification by decree of November 14, 1983), it now houses the town hall. The floors are occupied by rental apartments. Admire the delightfully shaded French-style park

The parish church
The parish church, placed under the name of Saint Christopher and the patronage of Saint Madeleine, was rebuilt in 1839, in a late classical style, with a nave of four bays. The apse is a cul-de-four. The processional cross, copper silver, dated xvi th century and is a listed building in the subject title.

It is placed under the name of Saint Christopher and the patronage of Saint Madeleine. It was rebuilt in 1839, on the site of the old Notre-Dame d’Espérance church. Built in a style classic late, with a nave of four bays, an apse in a cul-de-four, an interesting fresco of the choir and some stained glass and paintings.

The former priory built in the cemetery, near the confluence of the Bléone and Durance, also under the patronage of St. Kitts, offers a certain charm, although small.

The bridge
The bridge over the Bléone is the first in the department to abandon the humpback shape and the odd number of arches, thus giving up a certain archaism. Its two arches are in the handle of a basket, the central stack is protected by a pointed nose and a semi-cylindrical rear. The parapets are fitted with wheel chasers. It was built in a fine, regular structure, with two access ramps, in 1775-1778.

Before to cross the Bléone, you had to take the ferry. A bridge was decided to be built by the Region. It is the first in the department to abandon the humpback shape and the odd number of arches. Its two arches are in the handle of a basket, the central stack is protected by a pointed nose and a semi-cylindrical rear. The work of establishing the piles on wooden piles necessitated the diversion of the river; 190 workers worked on the site.

Other places and monuments
Canal bridge passing the Oraison canal over the Bléone
Serre-Bourret Castle
The small cemetery where the chapel is decorated with a sundial
The village and the fortified castle of Chénerille are in ruins.

The old parish church of Saint-Florent de Chénerille was restored in 2007.

Traditions and festivals
The festival committee aims to set up festivities throughout the year to liven up the village. 2 important events took place in the summer with the Napoleonic Days which lasted 2 days with a meal of more than 300 seats served on Saturday evening and the votive festival over 3 days with a meal of 150 people on Saturday evening also. Other activities such as the Carnival, the Evening of the Islands, karaoke, the New Year’s Eve and many others were very successful.