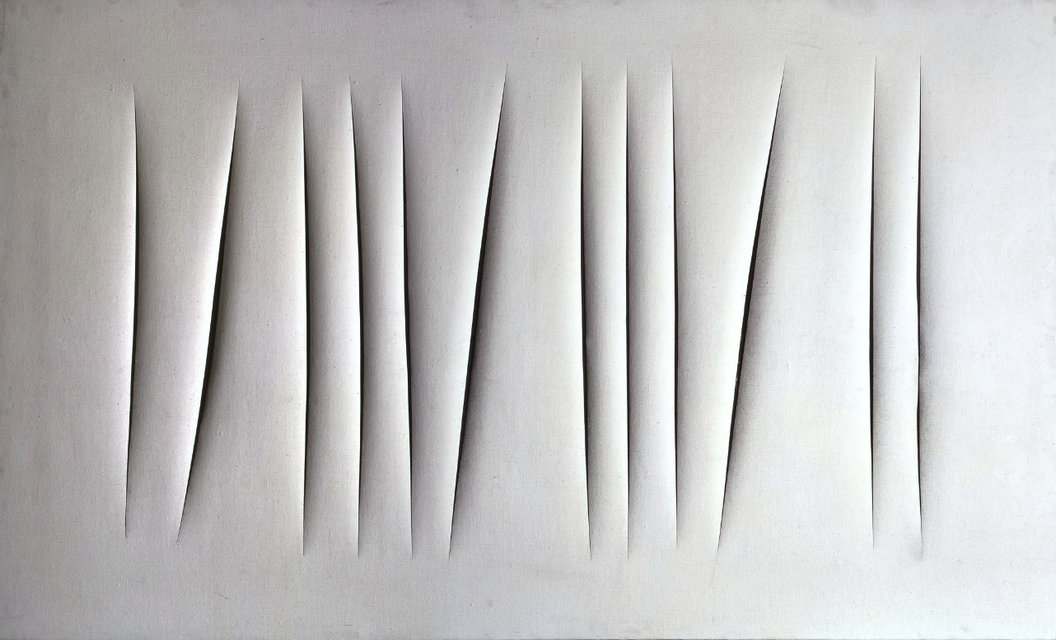 Lucio Fontana (February 19, 1899 – September 7, 1968) was an Italian painter, sculptor and theorist of Argentine birth. He was mostly known as the founder of Spatialism and his ties to Arte Povera. He has become an international sculptor as a sculptor and painter. In his work he dealt primarily with the concepts of space. He began as a realistic artist, after World War II he became the leading figure of art avant-garde in Italy.

Born in Rosario, province of Santa Fe, Argentina to Italian immigrant parents, he was the son of the sculptor Luigi Fontana (1865 — 1946). Fontana spent the first years of his life in Italy and came back to Argentina in 1905, where he stayed until 1922, working as a sculptor along with his father, and then on his own. Already in 1926, he participated in the first exhibition of Nexus, a group of young Argentine artists working in Rosario de Santa Fé.

In 1927 Fontana returned to Italy and studied under the sculptor Adolfo Wildt, at Accademia di Brera from 1928 to 1930. It was there where he presented his first exhibition in 1930, organized by the Milano art gallery Il Milione. During the following decade he journeyed Italy and France, working with abstract and expressionist painters. In 1935 he joined the association Abstraction-Création in Paris and from 1936 to 1949 made expressionnist sculptures in ceramic and bronze. In 1939, he joined the Corrente, a Milan group of expressionist artists.

In 1940 he returned to Argentina. In Buenos Aires (1946) he founded the Altamira academy together with some of his students, and made public the White Manifesto, where it is stated that “Matter, colour and sound in motion are the phenomena whose simultaneous development makes up the new art”. In the text, which Fontana did not sign but to which he actively contributed, he began to formulate the theories that he was to expand as Spazialismo, or Spatialism, in five manifestos from 1947 to 1952. Upon his return from Argentina in 1947, he supported, along with writers and philosophers, the first manifesto of spatialism (Spazialismo)**. Fontana had found his studio and works completely destroyed in the Allied bombings of Milan, but soon also resumed his ceramics works in Albisola. In Milan, he collaborated with noted Milanese architects to decorate several new buildings that were part of the effort to reconstruct the city after the war.

Following his return to Italy in 1948 Fontana exhibited his first Ambiente spaziale a luce nera (Spatial Environment) (1949) at the Galleria del Naviglio in Milan, a temporary installation consisting of a giant amoeba-like shape suspended in the void in a darkened room and lit by neon light. From 1949 on he started the so-called Spatial Concept or slash series, consisting in holes or slashes on the surface of monochrome paintings, drawing a sign of what he named “an art for the Space Age”. He devised the generic title Concetto spaziale (‘spatial concept’) for these works and used it for almost all his later paintings. These can be divided into broad categories: the Buchi (‘holes’), beginning in 1949, and the Tagli (‘slashes’), which he instituted in the mid-1950s.

Fontana often lined the reverse of his canvases with black gauze so that the darkness would shimmer behind the open cuts and create a mysterious sense of illusion and depth. He then created an elaborate neon ceiling called “Luce spaziale” in 1951 for the Triennale in Milan. In his important series of Concetto spaziale, La Fine di Dio (1963–64), Fontana uses the egg shape. With his Pietre (stones) series, begun in 1952, Fontana fused the sculptural with painting by encrusting the surfaces of his canvases with heavy impasto and colored glass. In his Buchi (holes) cycle, begun in 1949-50, he punctured the surface of his canvases, breaking the membrane of two-dimensionality in order to highlight the space behind the picture. From 1958 he purified his paintings by creating matte, monochrome surfaces, thus focusing the viewer’s attention on the slices that rend the skin of the canvas. In 1959 Fontana exhibited cut-off paintings with multiple combinable elements (he named the sets quanta), and began Nature, a series of sculptures made by cutting a gash across a sphere of terracotta clay, which he subsequently cast in bronze.

Fontana engaged in many collaborative projects with the most important architects of the day, in particular with Luciano Baldessari, who shared and supported his research for Spatial Light – Structure in Neon (1951) at the 9th Triennale and, among other things, commissioned him to design the ceiling of the cinema in the Sidercomit Pavilion at the 21st Milan Fair in 1953.

Around 1960, Fontana began to reinvent the cuts and punctures that had characterized his highly personal style up to that point, covering canvases with layers of thick oil paint applied by hand and brush and using a scalpel or Stanley knife to create great fissures in their surface. In 1961, following an invitation to participate along with artists Jean Dubuffet, Mark Rothko, Sam Francis, and others in an exhibition of contemporary painting entitled “Art and Contemplation”, held at Palazzo Grassi in Venice, he created a series of 22 works dedicated to the lagoon city. He manipulated the paint with his fingers and various instruments to make furrows, sometimes including scattered fragments of Murano glass. Fontana was subsequently invited by Michel Tapié to exhibit the works at the Martha Jackson Gallery in New York. As a consequence of his first visit to New York in 1961, he created a series of metal works, done between 1961 and 1965. The works consisted of large sheets of shiny and scratched copper, pierced and gouged, cut through by dramatic vertical gestures that recall the force of New York construction and the metal and glass of the buildings.

Among Fontana’s last works are a series of Teatrini (‘little theatres’), in which he returned to an essentially flat idiom by using backcloths enclosed within wings resembling a frame; the reference to theatre emphasizes the act of looking, while in the foreground a series of irregular spheres or oscillating, wavy silhouettes creates a lively shadow play. Another work from that time, Trinità (Trinity) (1966), consists of three large white canvases punctuated by lines of holes, embraced in a theatrical setting made from ultramarine plastic sheets vaguely resembling wings.

In the last years of his career, Fontana became increasingly interested in the staging of his work in the many exhibitions that honored him worldwide, as well as in the idea of purity achieved in his last white canvases. These concerns were prominent at the 1966 Venice Biennale, for which he designed the environment for his work. At Documenta IV in Kassel in 1968, he positioned a large, plaster slash as the centre of a totally white labyrinth, including ceiling and floor (Ambiente spaziale bianco).

Shortly before his death he was present at the “Destruction Art, Destroy to Create” demonstration at the Finch College Museum of New York. Then he left his home in Milano and went to Comabbio (in the province of Varese, Italy), his family’s mother town, where he died in 1968.

Fontana created a prolific amount of graphic work with abstract motifs as well as figures, little-known in the art world, at the same time as he was producing his abstract perforated works. He was also the sculptor of the bust of Ovidio Lagos, founder of the La Capital newspaper, in Carrara marble.

Fontana had his first solo exhibitions at Galleria del Milione, Milan, in 1931. In 1961, Michel Tapié organized his first show in the U.S., an exhibition of the Venice series, at the Martha Jackson Gallery, New York. His first solo exhibition at an American museum was held at the Walker Art Center, Minneapolis, in 1966. He participated in the Bienal de São Paulo and in numerous exhibitions around the world. Among others, major retrospectives have been organized by the Peggy Guggenheim Collection, Venice (2006), Hayward Gallery, London (1999), Fondazione Lucio Fontana (1999), and the Centre Georges Pompidou (1987; traveled to La Fundación ‘la Caixa’ Barcelona; Stedelijk Museum, Amsterdam; Whitechapel Gallery, London). Since 1930 Fontana’s work had been exhibited regularly at the Venice Biennale, and he represented Argentina various times; he was awarded the Grand Prize for Painting at the Venice Biennale of 1966. In 2014, the Musée d’Art Moderne de la Ville de Paris dedicates a retrospective to the artist. Tornabuoni art held a parallel show in its Avenue Matignon Paris gallery space.

Today Fontana’s works can be found in the permanent collections of more than one hundred museums around the world. In particular, examples from the Pietre series are housed in the Stedelijk Museum, Amsterdam, the Centre Pompidou, Paris, the Museum of Modern Art in New York, the Galleria Nazionale d’Arte Moderna, Rome, and the van Abbemuseum, Eindhoven. Fontana’s jewelry is included in the permanent collection of the Museum of Fine Arts, Boston.

A rare, large crimson work with a single slash, which Fontana dedicated to his wife and which has always been known as the Teresita, fetched £6.7 million ($11.6 million) at Christie’s London in 2008, then an auction record for the artist. Fontana’s Concetto Spaziale, Attese (1965), from the collection of Anna-Stina Malmborg Hoglund and Gunnar Hoglund set a new record for a slash painting at £8.4 million at Sotheby’s London in 2015. Even more popular are Fontana’s oval canvases. Sotheby’s sold a work titled Concetto spaziale, la fine di dio (1963) for £10.32 million in 2008. Part of Fontana’s Venice circle, Festival on the Grand Canal was sold at Christie’s in New York for $7 million in 2008.