History
The Library of the University of Barcelona, in comparison with the great European university libraries, enters the history late and discontinuously, which does not favor the conservation of the University’s medieval bibliographic heritage, founded in the 16th century.

In 1863, when work began on the current site of the University, Elies Rogent projected the distribution of the interior spaces, attributing to the Library a set of spaces on the main floor, which was a clear example of the prestige he had the bibliographic collection temporarily deposited in the Convent of San Juan de Jerusalem, from the Confiscation and containing the legacy of the main conventual libraries of Barcelona, heirs at the same time of great bibliophiles.

During the republican period the University and Public Library becomes a part of the University Heritage. According to a Decree of June 1 and Order of September 7, 1933, the Library becomes governed and maintained by the Board of Trustees, which must channel the endowments that come to it from the general state budgets and contribute their own. 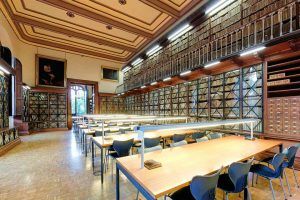 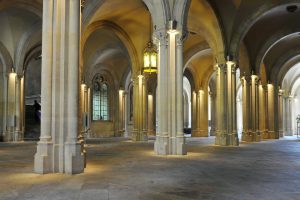 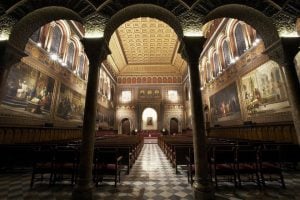 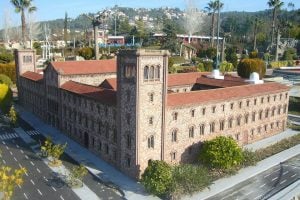 In 1984, and for the first time, the University of Barcelona Library had its own budget. Until then, books, magazines and all kinds of material were purchased from the faculties, departments and chairs.

In 1985, the Statute of the University of Barcelona was approved, which, in article 56, defined a new structure of the Library in which technical management and processing areas were created, as well as areas of specialization, ‘according to the content and internal organization of the divisions.

In early 2004, in response to the need to adapt university libraries to the new European Higher Education Area (EHEA) and to the European Research Area (ERA), the new learning-based university education framework, the research, development and innovation, it became the Resource Center for Learning and Research of the UB (CRAI), which integrates the services of the Library, support for teaching and research.

The UB Learning and Research Resource Center (CRAI) consists of 16 libraries, specialized in different subject areas (located at the different faculties of the UB), and 7 technical units ] working together.

Collections
The general collection of libraries is made up of documents related to the fields of teaching, learning and research at the University of Barcelona. It is freely accessible and is located according to their theme in the different libraries of the UB. It is updated and includes documents in different formats: books, magazines, audiovisual material, electronic resources, etc., the recommended and specialized bibliography of the courses taught at the University, and other bibliographic and information resources.

The Library of the University of Barcelona in the mid- nineteenth century, and as a result of the confiscation, receives the legacy of major libraries convent Barcelona that will provide funds delicious, making it become one of the first libraries in ancient collection of Catalonia id ‘ Spain.

Within this legacy include:

It also has legacies from the personal archives and collections of people such as Pere Bosch Gimpera, Ernest Lluch, Ramon Margalef López, Oriol Martorell or Santiago Ramón y Cajal, as well as specialized collections such as the Col • Grewe’s lecture on food and gastronomy, the collection of Editorial Mateu or the one specialized in studies and editions by Ramon Llull.

A neo-Romanesque building, the building is the paradigmatic example of nineteenth-century architecture, a search for a national cultural identity that is typical of the moment. It is important, then, to know the context and at the same time the architectural theory of Rogent, which, as some authors have said, is more important and more transcendental than the work of the architect himself. The most important aspects of Rogent’s theory, when approaching the study of this building, are the constant rejection of the classifying training he received at the Escola de Llotja de Barcelona, the influence of the work by Francesco Milizia and his relationship with the group of Catalan Nazarenes. Milizia’s work; Principles of Civile Architecture, gathers the most advanced thought of the eighteenth century, which denounces classicist practice in architecture, elevates gothic architecture as an alternative to outdated classicism, and elaborates a whole theory on the organizational adequacy of space for the use to which the buildings are intended. The last point Milizia addresses is what we can see Rogent addressing in the University building.

Another important aspect to keep in mind when talking about the style of this building is the discovery that Rogent made during his 1855 voyage to France and Germany, where he discovered the Rundbogenstil (arch style) in Munich. round point) a combination of early Italian Renaissance architecture and medieval architecture, which will significantly and significantly use it in the construction of the University. In Munich, the main buildings projected following the Rundbogenstil that Rogent sees and studies in detail are the State Library of Bavaria, University of Munich. and the Max Josephstift corner pavilion at Ludwingstrasse.

In short, the university building is complex to define, but eclecticism, the influence of Catalan medieval architecture and the influence of the first Italian Renaissance are the basic style features of this building.