Three hundred years of troubled construction of the National Pantheon originated the proverb “Obras de Santa Engracia”, meaning any work that will take long to be finished.

Its history dates back to the construction of Church of Saint Engratia at the end of the 17th century, Works were completed in the 20th century and the Pantheon was inaugurated on December 1966.

The remarkable building campaign that succeded in completing the works of Saint Engratia, a unique example of the Portuguese Baroque period, reseued from disrepair a monument that was considered by writer Ramalho Ortigao in 1896 as “The most beautiful of all 17th century monuments” and turned it into a National Pantheon.

This ambitious achierement that inrolred construction of the dome, interior finishing, staturay care, installaion of the organ and improrements on the surrounding area led to different solutions regarding finishing touches, as well as architectural and sculptural details. 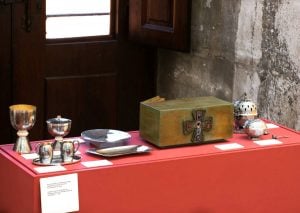 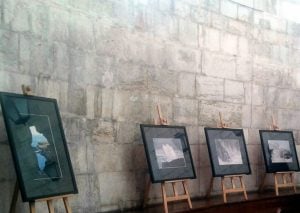 This space is meant to proride a better understanding of the historic bachground and different stages of construction of the monument. It includes remnants of the primitire church, archiectural models, and plaster models of the campaign that led to completion of the works of Saint Engratia, as well as jewellery objects that were used for celebrating the National Pantheon’s inaugural mass.

The history of the monument paying homage to some of the most illustrious Portuguese personalities can be seen in a film depicting its long and troubled history.

Church of Saint Engracia – the myth and the history
Four hundred years of construction originated the popular Portuguese adage “works of Santa Engrácia” related to the monument that is today the National Pantheon.

Infanta D. Maria, a devotee of the Portuguese martyr Santa Engrácia, ordered the construction of a temple dedicated to the saint in the last quarter of the 16th century. The choice of Santa Engracia to patronize the new church is accompanied by the execution of a silver reliquary holding the relics of the Saint, which belonged to the Princess.

From the primitive church, of a single nave, built at the end of the sixteenth century, according to the project of the arq. Nicolau de Frias, there is only one vague description and a drawing. Also remains the history of the desecration of the church. Simon Solis, falsely accused and convicted, launched the curse on the “works of Santa Engrácia” condemned to remain eternally dragged in time.

As the legend goes, in 1630 the young new-Christian Simão Pires Solis was in love with a young noblewoman whose family ordered her to be confined to the convent of Santa Clara, near the Church of Santa Engrácia. The night of the iniquitous action, he was walking around the convent hoping to see her and persuade her to elope. Arrested and charged with the crime, Simão never gave away the motive that drove him to the surroundings of Santa Engrácia and only claimed for his innocence. He was tried and convicted for the profanation of the church – a terrible crime in that historical period – and condemned to the Inquisition’s bonfire. Simon Solis, falsely accused and convicted, launched the curse on the “works of Santa Engrácia” condemned to remain eternally dragged in time.

In the 17th century, after the collapse of the original church, the architect João Antunes designed the project for a new temple, based on a centralized floor plan in the form of a Greek cross, which was a novelty in the Portuguese architecture of the time. João Antunes designed a bold Baroque project, construction of which began in 1682, but it was not finished, remaining for many years without cover.

With the extinction of religious Orders in 1834, the temple of Santa Engracia was handed over to the Army, which covered it with a zinc dome and adapted it, among other functions, to a footwear factory equipping the military forces, namely during the Great War.

Several architects submitted proposals for completion of the building in 1956. The project by Luís Amoroso Lopes was selected but it underwent a number of major changes. In the early 1960s and in the absence of the initial project by João Antunes, the political regime decided to finish the building and implement the law of 1916, which had determined the adaptation of the temple to a National Pantheon. In a little more than two years, a concrete double-shell dome, clad in lithium stone, was designed, and the interior was restored with a splendid design on several types of stone.

At the same time the sculptural program of the building was implemented, executed by two important Portuguese sculptors. The sculptors were António Duarte (1912-1998) – who made the statues of the main façade – and Leopoldo de Almeida (1898-1975) – author of the statues inside the temple. At the same time that the dome was raised and the interior of the temple was restored, in the area surrounding the monument was created a paved area and a stairway access to the front that suited the monumentality of the building.

Despite the vicissitudes of its construction, the Church of Santa Engrácia boasts a remarkable Baroque project, which is unique in Portugal.

The completion work – in 1966 – had the merit of rescuing the monument from abandonment, and adapting it in an imposing but elegant way, to its National Pantheon functions.

National Pantheon – model,
2011
Space which integrates elements recovered from the primitive church, pieces of jewelry used in the celebration of the opening Mass of the National Pantheon and a unique set of models in plaster of the campaign of conclusion of the construction of the monument (1964-1966).

A model of the National Pantheon
made by João Laerte, 1965.
plaster and wood.

Church of Saint Engratia
artifacts, 2018
Artefacts used for celebrating the inaugural mass of the National Pantheon at December 7, 1966.

The current building of the Church of Santa Engrácia substituted previous churches dedicated to a martyr of the city of Braga, Saint Engrácia. The first church dedicated to the Saint was sponsored by Infanta Maria of Portugal, Duchess of Viseu, daughter of King Manuel I, around 1568. In 1681, construction of the current church began after previous structures collapsed. The design was the work of João Antunes, royal architect and one of the most important baroque architects of Portugal.

Construction proceeded from 1682 through 1712, when the architect died. King John V lost interest in the project, concentrating his resources in the gigantic Convent of Mafra. The church was not completed until the 20th century, so that Obras de Santa Engrácia (literally Saint Engrácia’s works) has become a Portuguese synonym for an endless construction project. A dome was added, and the church was reinaugurated in 1966.