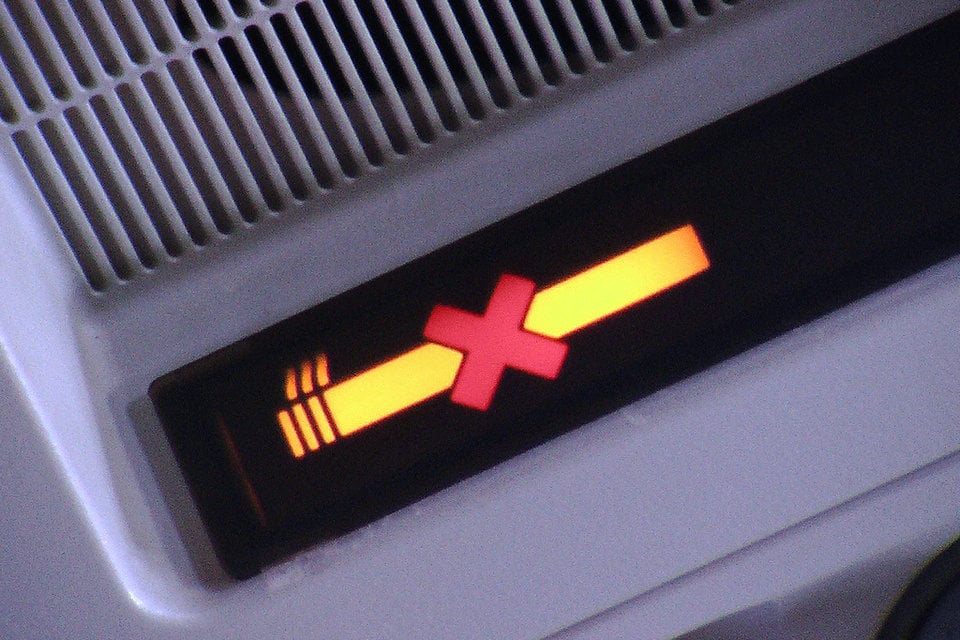 Inflight smoking is prohibited by almost all airlines. Smoking on domestic U.S. airliners, for instance, was banned on all domestic flights with a duration of two hours or less beginning in 1988, with all planes being smoke-free by the end of the 1990s. According to FAA regulations, smoking lit cigarettes or anything else that produces smoke or flame is prohibited onboard most commercial aircraft. As of October 2015, the USDOT prohibits the use of electronic cigarettes on flights, as well as such devices from being transported in checked luggage.

Advocate Ralph Nader was among the first to call for a smoking ban on airlines. United Airlines was the first to implement a nonsmoking section, in 1971. However, both tobacco companies and airlines fought any regulation. Significantly, the Civil Aeronautics Board banned and then unbanned smoking in 1984, with chairman Dan McKinnon saying, “Philosophically, I think nonsmokers have rights, but it comes into market conflict with practicalities and the realities of life.” After years of debate over health concerns, Congressional action in 1987 led to a ban on inflight smoking.

The U.S. ban on inflight smoking began with domestic flights of two hours or less in April 1988, extended to domestic flights of six hours or less in February 1990, and to all domestic and international flights in 2000. The 1990 ban applied only to the passengers and the cabin of the aircraft and not the flight deck. Pilots were allowed to continue smoking after the 1990 ban due to concerns over potential flight safety issues caused by nicotine withdrawal in chronic smokers.

Normally, passengers found to be smoking on non-smoking flights will at least face a fine (up to $5,000) and at worst be arrested and detained upon landing. Due to stringent security measures, this often causes disruption such as having to land the flight early in order to escort the smoker from the plane.

Such regulations have on occasion met with defiance; in 2010 a Qatari diplomat was arrested upon arrival at Denver International Airport for smoking in the onboard lavatory on United Airlines Flight 663 and for making threats; when confronted by airline staff, he jokingly suggested that he was attempting to set his shoes on fire. On February 3, 2013, a family of four were accused of smoking during a Sunwing Airlines flight from Halifax to the Dominican Republic. They caused the flight to make an emergency landing at Bermuda L.F. Wade International Airport. The two eldest of the family were arrested by Bermuda Police Service and subsequently sentenced to a $500 fine or 10 days in prison.

Due to the ubiquitous prohibition of in-flight smoking and the increasingly widespread use of electronic devices, the illuminated no-smoking signs have sometimes been re-purposed to inform passengers to switch devices off for take-off and landing. Where this is the case, the no-smoking sign is permanently printed on the overhead panels.