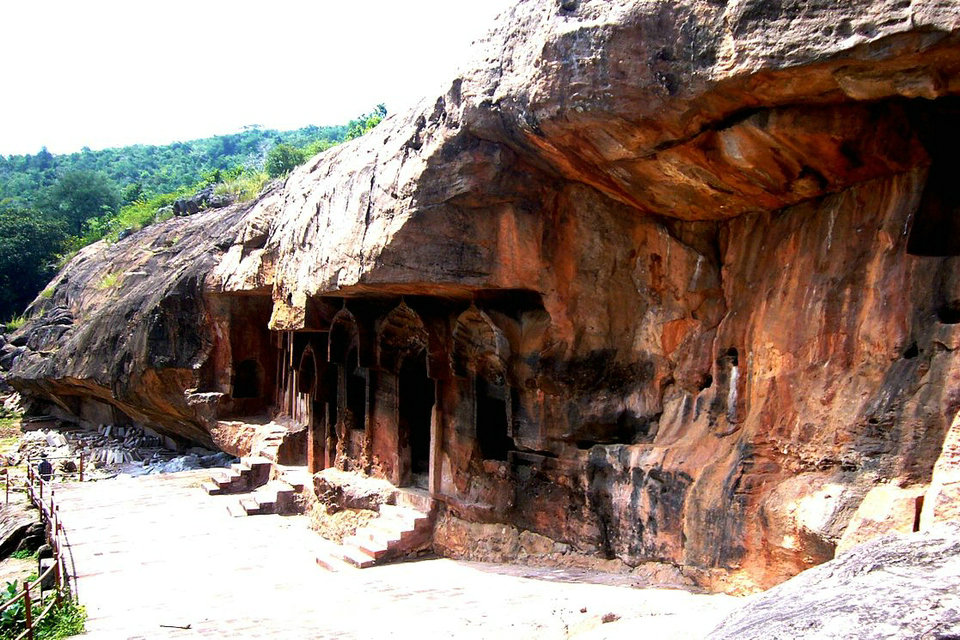 The Guntupalle or Guntupalli Group of Buddhist Monuments is located near Kamavarapukota, West Godavari district, in the state of Andhra Pradesh in India. It is around 40 km away from Eluru. The rock-cut part of the site has two Buddhist caves, a chaitya hall and a large group of stupas. The chaitya hall has a rare carved stone entrance replicating wooden architecture, a simpler version of that at the Lomas Rishi Cave.

There are remains of structural buildings in brick and stone, including remains of two vihara made of brick, as well as excavated caves at two levels, including an unusual structural chaitya hall (that is, one built above ground). The core of this consists of the stone stupa with an enclosed path around it allowing ritual parikrama (circumambulation). They mostly date to 200-0 BCE, with some sculptures added later. The main building above ground is in brick, around a stone stupa, with over 30 smaller stupas on a terrace in front of it. There are ruins of two other buildings.

During excavation, three relic caskets were found. The caskets had many precious elements like gold, silver, crystal beads. The bronze image of Padmapani was found along with one of the caskets. The inscription on the casket was in the Devanagari script which indicates the year as from the 9th to 10th century CE.

Guntupalla or Guntupalli , a village of Kamarvarpotota mandal in West Godavari district. . This village is the oldest Buddhist place. Historically famous. The Guntupalli villages are located in the same Panchayat range. These Buddhist caves are famous as the Guntupalli Caves, but they are actually in the city of Jalakarakeududu. About three inches away from Guntupalli, if you go to the jerkarkaradedu , the jelakkarra gudem is way up the hill. Many Buddhist architectural deities found in the Andhra country are evidence of the distinct position of Buddhism in the history of Buddhism. In such fields, probably the oldest is the oldest one. Guntupalli is also about the same period. These are important Buddhist works of the 3rd century BC. Gutupalli has recently been considered as a Buddhist site. However, the recent availability of the Vayaganagara Srisidas mandap and the Kharavelu statutes proves that Jainism has also flourished here. The village has primary education facilities. Higher education facilities are available in the Kamavarpattu Fort and technical education facilities in Janga Reddy GoD, vocational education and medical education facilities in Eluru.

Historical significance
Buddhism has been a popular lifestyle since the time of Buddha in the Andhra country. Many Buddhist architectural deities found in the Andhra country are evidence of the distinct position of Buddhism in the history of Buddhism. In such fields, probably the oldest is the oldest one. Guntupalli is also about the same period. These are important Buddhist works of the 3rd century BC. Gutupalli has recently been considered a Buddhist field. But recently the recent availability of the Vayalagavana Siri Sita and Kharevas are proven that Jainism has also flourished here.

The Buddhists found on Guntupalli Vuri hills are historically very important. The Archaeological Survey of India has decided that these are historic and preserved antiquities. On the hill, there are sturdy gardens, monasteries and stupas. One of these is found in a stupa. This Tirth is a testimony to the many stupas that can be seen here to attract devotees.

The mausoleum, the Buddhist rituals, the top stupas, the stone stupas, and the top of the hill. It is thought to have expanded between 300 and 300 BC. They are evolving the monasteries of Buddhism (Hainia Buddhism) due to factors such as the overalls and the lack of Buddha images. (Buddhism was not popular in the early days of Buddhism), Buddha prohibited them from provoking sensual desires, and their purpose was to be restricted to the virtue, but not rasanabhuti – the discipline of radical Buddhism was very strict. ) In Jelakarakudem , bauddharamala Found.

Cave
BC This is the oldest of the 3-2 century. The culprit inside this rounded cave (now known as Dharma Lingeshwara Shivalingam), is surrounded by Prabhakshana. The top of the cave is Vasas, which are inscribed by the commanders (like wooden chambers). The cave has a resemblance to Sudhama and Lomasrishi caves in Bihar .

Big Buddhist monastery
It is a group of caves which are located in the edge of sandstone. Residence location for Buddhist pilgrims. The caves are connected to each other with rounded windows. The water flows into the caves and flows through the rain water streams.

Lined stairs
There are about sixty high stairs in various shapes on the hill, especially roundabout. These are built on stone or brick pedestals. There are also chameleon houses.

Stone cranes
BC The top of the stupa of the 2nd century is covered with rocky plates. Some of the excavations were excavated in the 19th century BC. It was destroyed by those looking for funds before. Its dome height is 2.62 m, diameter 4.88 m.

Debris hall
It is a nominal building with four broken columns. Pre-Buddhist Pilgrim Meeting Hall The stone pillar found here From the 1st to 5th century BC there is a description of the donations. The original length is 56 feet, and the width is 34 feet.

Chamber house
It has a length of 17.6 meters in length and 4.42 meters wide. Its wall was 1.32 meters high. There are images of Buddha and Bodhisattu on the sides of the entrance to its entrances. Its decorative highlight is similar to Nasik and Carly Caves.

Brick stump
It is also a monument to the 3rd century BC. The hill is built on the high end of the eastern end of the hill. The stairway to reach this is known to have been built by a teacher of the 25th century BC. This chaotic home is 11 m. The article contains. The stupa is around 1.8 meters wide.

Recently available
More recently, on 04-12-2007, a brahmapalli statue of the crown is available as the beginning of Christ’s ceremony. Various historical events have been witnessed through this edition. This marble plaque was introduced in Telugu by the newly formed Telugu motifs and modules. The Buddhist monk, a well-known Buddhist medieval Middikulam, is credited to the brilliant language of the stone plate that was donated to the Buddhist devotees living in Guntupalli caves. The Andhra State Department of the Union Archaeological Department has exhausted this stone law. Guntupalli is a village in the Kamarpukotota mandal, West Godavari district . It is about 8 km from Kavaravarpota, the center of the zoo. M. It is located at a distance of 45 km from the nearby town of Eluru . M. Is far away.