This important collection was born from Carlo Grassi’s passion for art and the generous donation to the City of Milan on behalf of his widow, Nedda Mieli, in 1956 with the agreement that the works be displayed in memory of their son Gino, who had died as a volunteer in El-Alamein at the age of eighteen. Carlo Grassi (1886–1950) was an Italian entrepreneur. He was born in Greece and then moved to Cairo in the late 1800s, where he became one of the most well-known producers and traders of tobacco.

He spent long periods in Italy where, besides his homes in Rome and Milan, he had a large villa at Lora, outside Como. When he moved to Italy with his wife in the late 1930s, this would become the main showcase for his impressive art collection. In addition to some refined Asian art objects and paintings from the 14th to 18th centuries, the Grassi Collection boasts an important core of Italian 19th-century works – by Fattori, De Nittis, Boldini, the Milanese Scapigliati, just to name a few – and of Divisionism – by Previati, Segantini, Pellizza da Volpedo. But the collection also presents a vast array of international artists, which was quite uncommon at the time among critics and art dealers who preferred traditional art. 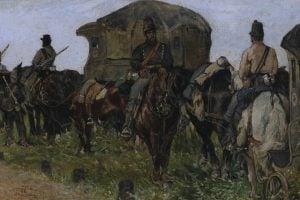 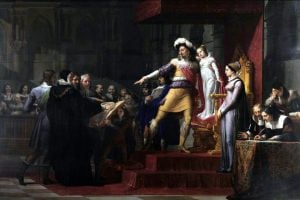 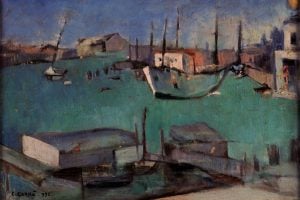 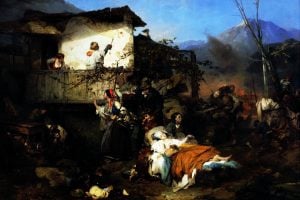 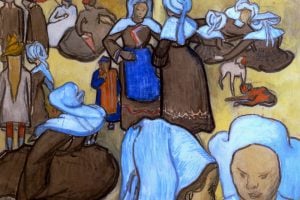 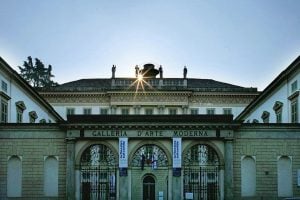 Grassi collected paintings by Manet, Van Gogh, Cézanne, and today these are the only works by these masters found in Milan’s museums. Especially after his move back to Italy, Grassi became quite interested in contemporary Italian painting: also present are avant-garde works – in particular by Boccioni and Balla – and art from between the World Wars – Morandi, De Pisis, Tosi, and many others. The exhibition design by architect Ignazio Gardella is an important example of 1950s Italian museography and was restored in 2014, when the entire itinerary was changed to host, within this space, the Vismara Collection, which had previously been on display on the Gallery’s ground floor.

Staircase
The visit to the Grassi collection begins with the impressive staircase, designed by the architect Gardella to replace the previous service staircase, with the dual purpose of allowing easy access to the floor and exhibiting some significant works from the beginning. In particular, this environment contains in special showcases part of the Asian antiquities collected by Carlo Grassi, among which noteworthy are the rare statuettes depicting the 18 historical disciples of the Buddha, probably made in Tibet between the 18th and 19th centuries. From the landing it is possible to admire Herod’s banquet , painted by the Calabrian Mattia Preti around 1675, during a stay on the island of Malta.

Ancient and Oriental art
ROOM I
In the corridor, the display of oriental artifacts continues: specifically, these are carpets and fabrics from India, Iran, Turkey, the Caucasus, Algeria, as well as three lacquered and encrusted panels with hard stones, a fine example of Chinese art. The 16th and 18th century paintings are also collected here, which constitute a small nucleus but not for this reason significant in the collection. Recently attributed to the Venetian Battista Franco known as the Semolei is the painting depicting Apollo and Marsyas , long considered by Tintoretto. It is flanked by three paintings by Pietro Longhi, an eighteenth-century painter well known for his scenes of Venetian life, always caught with keen observation and subtle irony.

Flemish and Dutch painting
ROOM II
The small hall hosts an Adoration of the Shepherds performed in the circle of the Flemish painter Jan de Beer, emblematic of the particular type of nocturne, in which light is the absolute protagonist, a specialty of the Flemish since the end of the fifteenth century. These are works much appreciated by collectors and for this reason they were often destined for export from the beginning. The Figure at the window of the Dutch Gerrit Dou effectively represents the tradition of the Leiden School, characterized by small-format paintings, executed with meticulous precision of details and with refined and patient technique.

French and Italian nineteenth century
ROOM III
Corot’s masterpiece Le coup de vent and The return from Millet’s farm represent one of the components of the collection, made up of nineteenth-century French painting. It is flanked by coherent nuclei of Italian works of the same era: significant is the presence of the Macchiaioli (Borrani, Cabianca, Fattori, Lega, Signorini), not otherwise represented in the museum collections. The paintings of Cremona and Ranzoni (the view of Lake Maggiore is splendid)), instead, ideally complete the exhaustive exhibition of Scapigliatura works visible on the lower level of the museum. Finally, the views of the Venetians Ciardi, Favretto and Zandomeneghi illustrate the different outcomes of personal research conducted by these artists in the field of landscape painting.

Italian painters in Paris
ROOM IV
Boldini from Ferrara and De Nittis from Puglia are the two most significant cases of Italian artists who made Paris their chosen city, staying more or less continuously from 1867 onwards. Both prove to appreciate the pastel technique, functional to the rendering of particular pictorial and dynamic effects, as can be verified especially in the female portraits: the Dame à Ulster and La femme aux pompons by De Nittis, and L’americanaby Boldini, made for the acclaimed painter’s stay in New York. Some of the other artists present in the room (Michetti, Rossano, Toma) have in common the Neapolitan formation, held in the context of Domenico Morelli, of which also a portrait and two preparatory studies are exposed.

Divisionism and Antonio Mancini
ROOM V
In the exhibited paintings it is possible to find the material style of the Roman Mancini, who after an initial training at the school of Morelli, in the ambit of Neapolitan verismo, evolves towards the elimination of the contours and a rich chromatism, also on the basis of the fascination for painting impressionist. Previati’s two pastels and Segantini’s other works, on the other hand, are further examples of Divisionist painting, well represented in the museum’s collections. In particular, the Calma of Previati is the autograph and larger-sized replica of an oil painting (Florence, Galleria d’Arte Moderna): the painter is not new to similar practices, which are often found on the occasion of works that the artist considers it particularly significant and therefore re-elaborates.

Armando Spadini
ROOM VI
Spadini, a native of Tuscany, moved to Rome in 1910 and there he directed his painting, remaining extraneous to every avant-garde experience: a personal naturalism was born, based on a free and passionate observation of the truth, but not exempt from the influence exerted on the painter from the works of the Impressionists (in particular Renoir). His favorite model is, from an early age, his daughter Anna ( Anna in white and Children and flowers ). In the monographic room, entirely dedicated to landscapes, figures and still lifes, one can fully appreciate the rich and luminous brushstrokes and the almost intimate style that distinguish the works of Spadini, a secluded artist appreciated by a small circle of admirers.

Graphics
ROOM VII
Carlo Grassi’s passion for graphics is at the origin of the presence in his collection of several dozen drawings and engravings, including works by Federico Faruffini, Giovanni Fattori, Silvestro Lega, Giovanni Migliara, Carlo Canella. Only a small group of these sheets is exposed, while the totality of the collection is kept in the drawers beneath the windows, sheltered from the light, particularly harmful for the works on paper. The French landscape architect Corot is present with a large number of clichés-verre, engravings made from a matrix consisting of an engraved glass plate, imprinted on photosensitive paper in a dark room: a technique very similar to photography, which then took its first steps. The lithographs by Henri de Toulouse-Lautrec, on the other hand, illustrate the modern and worldly Paris of the Impressionists, a world not far from the one told by the figures that populate the etchings of Paul César Helleu.

French avant-garde
ROOM VIII
The most important contribution of the Grassi collection is represented by the works shown here: unique masterpieces by international artists, rare opportunities to approach similar works in a Milanese museum. While the large portrait of Manet, remained unfinished, testifies to the artist’s coloristic research and the influence of photography in the particular cut of the frame, The thieves and the donkey demonstrates the great classical culture of Cézanne (the subject is taken from the literature Greek and Latin) and a particularly expressive style. The Breton women are an explicit homage of Van Gogh to the analogous painting by Bernard (private collection) that Gauguin, having acquired, had shown him. The cows at the water trough, painted during a stay in Normandy, date back to the years of Gauguin’s maximum adhesion to Impressionism.

Italian twentieth century
ROOM IX
Umberto Boccioni and Giacomo Balla are present with works still divisionist and with examples of the subsequent transition to Futurism, as evidenced by the comparison between the two portraits of Boccioni’s mother, or the portrait of the Girlfriend at the Pincio di Balla, soon followed by the speed of car which is emblematic of the research on the movement typical of the enthusiastic adhesion of the avant-garde futurist artist. The other works in the room instead illustrate the results of researches of a little later, based on the elaboration of a realistic painting (Fausto Pirandello, Felice Carena) or the personal experiences of two artists present both in the Grassi collection and in the Vismara collection: Giorgio Morandi and Arturo Tosi.

Galleria d’Arte Moderna – Milano
From 1903 the Galleria d’Arte Moderna preserves the modern art collections of the City of Milan, an artistic heritage of about 3,500 works. The collections are displayed from 1921 within the Villa Reale, one of the masterpieces of milan’s neoclassical era. Designed by the architect Leopoldo Pollock, it was built between 1790 and 1796 as the house of the earl Lodovico Barbiano di Belgioioso. Villa Reale later became the residence of the Viceroy Eugenio di Beauharnais, stepson of Napoleon.

Thanks to private collections and to the donations of important families, such as Grassi and Vismara, the artistic heritage of the Gallery has been enriched with masterpieces of the nineteenth and twentieth centuries.

The exhibition activity of the Galleria d’Arte Moderna dialogues with applied art, the contemporary languages and the thematic analysis of artists present in the permanent collection.

Collections
What makes Milan’s Modern Art Gallery of international stature is the value and quality of the works on display and housed here: Francesco Hayez, Pompeo Marchesi, Andrea Appiani, Tranquillo Cremona, Giovanni Segantini, Federico Faruffini, Giuseppe Pellizza da Volpedo, Antonio Canova, Daniele Ranzoni, Medardo Rosso, Gaetano Previati are some of the important artists present, as they are undisputed protagonists of Art History for both Milan and Italy. Their works represent art as it unfolded from the 18th to 19th centuries, in particular the current that originated in the Academy of Fine Arts of Brera and slowly took hold even beyond national borders. Thanks to 20th-century art collectors and donations by some prominent families (Treves, Ponti, Grassi, Vismara, for example), over the years these masterpieces have enriched the Gallery’s art heritage and confirmed its fundamental mission of perpetuating the diffusion of culture. Visitors can admire in the Villa’s halls works by Giovanni Fattori, Silvestro Lega, Giovanni Boldini, Vincent Van Gogh, Paul Cézanne, Pablo Picasso, Amedeo Modigliani, and other key players on Italy’s 20th-century art scene.