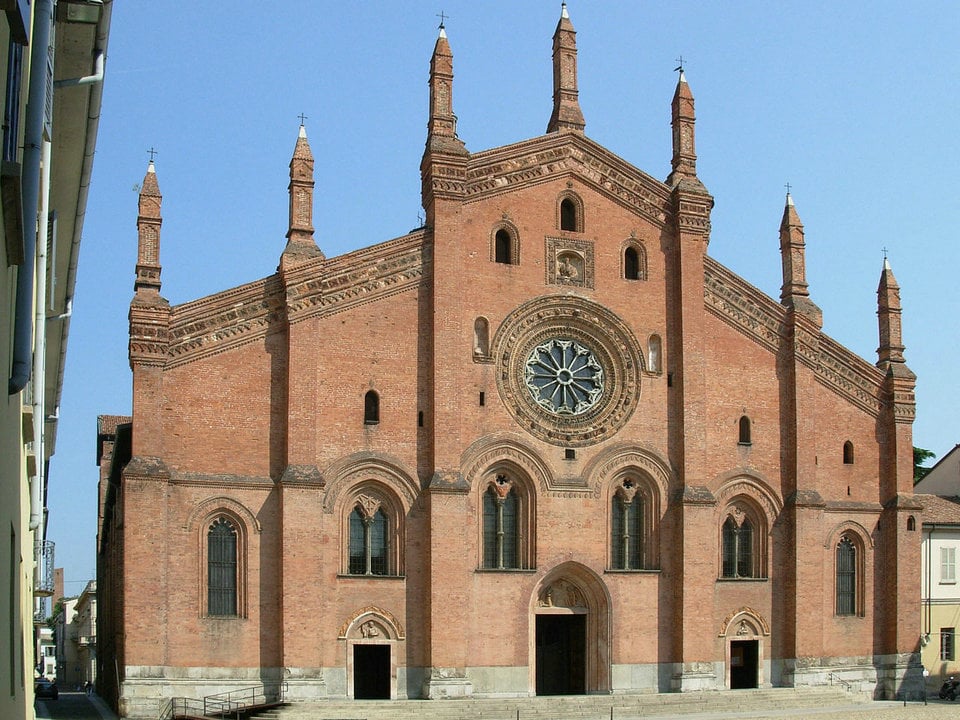 For gothic in Pavia we mean the artistic experience of the city between the end of the thirteenth century and the first half of the fifteenth century. Thanks in fact to the importance that the city still played in the Lombard area, Pavia was the protagonist of a lively artistic season, first with the municipal power and then with the Visconti, who intended with their commissions to affirm their domination over the second center of the Duchy of Milan.

Religious buildings
Among the first gothic churches in Pavia we find the church of San Francesco, finished towards the end of the XIII century. The front looks like a salient façade in cooked as a predominant element, as is typical Lombard architecture: it is divided into three vertical scores accentuated by buttresses as well as by salient. The central partition is the most decorated, with a double portal on the ground floor, probably borrowed from the Basilica of San Francesco in Assisi but which also recalls the double archway of the Milanese city gatesera. Above the portals there is a string course with four single lancet windows, dominated in turn by a monumental trifora: the area of the two portals and the string course on all three vertical scores presents a diamond and square decoration composed of alternating bricks red and white plaster; the façade is finished by five cylindrical pinnacles .

The church has a particular plant, fruit of the union between the basilica plant of the hall and the Greek cross plan of the capocroce . Very few fragments of frescoes remain of the original interior decoration, including a Saint Francis and a Madonna with Child from the late 1200s that recall the Byzantine art and a Presentation in the mid-fourteenth century of a Lombard painter already active between Bergamo and the abbey of Viboldone .

The church of Santa Maria del Carmine is later: started in the second half of the fourteenth century, it was finished in the mid-fifteenth century: the church’s project is often attributed to Bernardo da Venezia who would later re-propose this project for the church of the same name of Santa Maria del Carmine in Milan. The façade has rather stubby shapes, in contrast with the typical Gothic vertical development, decorated, without prejudice to some details, in terracotta. It is marked by six buttresses that create five vertical scores, the two external scores present a single windowwith pointed arches, while the three central ones are decorated with mullioned windows; the decoration of the central score has a rosette flanked by niches with terracotta sculptures of the announcing Angel and the announced Virgin .

The interior has a longitudinal plan, in which extensive use is made of a modular structure, in which the plan is composed of the union of several rooms with a square plan of the same size: the side of the square corresponds to a third of the width of the facade; the central nave has a width equal to one square, while the side aisles and chapels have as a form a square which is a quarter of the main square of departure (ie the union of two chapels and two bays of the aisle occupy an equivalent space at a span of the central nave). The cross vaults are supported by beamed pillars that form round arches .

The Charterhouse
The Certosa di Pavia, commissioned ex voto by Gian Galeazzo Visconti, was together with the Duomo of Milan the largest late Gothic construction site in Lombardy and among the largest in Italy. The project was originally assigned to Bernardo da Venezia together with Giacomo da Campione, already active in the construction site for the cathedral of Milan: Gian Galeazzo’s intention to bring the mausoleum of the Visconti family made sure that the officers received the order to build a grandiose church, not too dissimilar in proportions from the grandiose construction of the city cathedral, from which the structure of the three gothic naves, among the few purely Gothic elements of the church.

At the death of Gian Galeazzo in 1402 the building site of the church slowed down considerably: the work resumed appreciably to the rise to power of the Sforza, who made resume work in a style mixed between the late Gothic and Renaissance, to see them concluded with the realization of facade, masterpiece of the Lombard Renaissance. Of the original late Gothic structure, already deeply modified and reshaped during the Renaissance, the three naves are still clearly visible, separated by robust gothic beam vaulted piers, inspired by the Milan cathedral hall .

The Visconti castle
The Visconti castle, a military building that was also used as a noble residence, is certainly the largest civil Gothic monument in the city. The castle was built on the ruins of the old fortress destroyed by Luchino Visconti on a project by Bernardo from Venice starting from 1359 : in the construction workers were employed from all the duchy of Milan, which reached its maximum expansion under Gian Galeazzo Visconti, commissioner of the castle; thanks to the labor force of the whole duchy, the castle was ready in only seven years. The aspect of the castle, despite being in fact a fortress, was decorated in a sumptuous and refined manner, so much so thatPier Candido Decembrio called it at the time “a home that has no equal in Italy”. The north side of the castle was destroyed by French artillery during the siege of 1525 and never rebuilt, it contained frescoes of animals with gold background similarly to Theodelinda chapel of Pisanello .

The perimeter walls of the castle are decorated with a double row of brick mullioned windows: the entrance is introduced by a ravelin. Inside, the residential vocation of the castle is even clearer: the large courtyard is on the ground floor portico with cylindrical stone pillars with pointed arches; on the upper level of the southern side there are the four images joined together by a continuous frame that runs along the entire perimeter of the courtyard. The quadrifore are made up of pillars that support three-lobe arches, while between the frameworks and the frame there are three oculi in which decorative elements are inserted in terracotta. The four-light windows, once on all four sides of the courtyard, were replaced with mullioned windows and single-lancet windows on the western and eastern sides respectively .

The castle also housed one of the major Italian libraries: in an inventory of 1426, 988 manuscripts were cataloged. The entire library was however sacked with the siege of the castle by French troops in the 16th century, which completely dispersed the collection .

Palaces
Among the other civilian buildings of the Gothic-Visconti period, one of the most famous is the Casa dei Diversi, or Red House because originally covered with red plaster: located in the main square of the city rearranged by the Visconti, has a portico with large vaults pointed. The rest of the building, much remodeled over the years, shows the remains of the primitive decoration in the monumental three-mullioned window in brick and in some surviving monoforns .

Various alterations were also made on the Folperti house : some late Gothic decorations include the primitive double portal with a round arched entrance, now walled up, and the ogival mullioned windows on the upper floors .

Originating from the early fifteenth century, the original complex of the Eustachi house remains only a small portion. The house, built by Pasino Eustachi, commander under Gian Galeazzo Visconti, the house shows a large terracotta decoration typical of Lombard late Gothic with ogival windows with a wide profiling. The entrance portal has the same decoration as the single-lancet windows, and is surmounted by a tile that is always decorated in terracotta .

L ‘ Ouvrage de Lombardie
After having established a court seat in Pavia, the Visconti founded in the city the most prestigious miniature school of the region, which soon became famous throughout Europe for its realism and the end decoration with the name of Ouvraige de Lombardie.

The Visconti miners’ studio since about 1370 had elaborated a refined fusion between Giotto’s chromaticism and courtly and chivalrous themes. The protagonists of this first season were the anonymous miners author of Guiron le Coutois and the Lancelot du Lac, today at the Bibliothèque nationale de France in Paris, and Giovannino de ‘Grassi, who mined the book of prayers called Offiziolo, with representations of great linear elegance, naturalistic accuracy and decorative preciousness .

The next generation, especially in the personality of Michelino da Besozzo, elaborated this legacy in an even more free, imaginative and international way. In the Offiziolo Bodmer he used a fluid line, soft colors and a precious rhythm in the drawing of the figures, which indifferently ignored the spatial problems; everything was enriched by fresh naturalistic details, taken from the direct observation. The graceful style of Michelino was successful and a large following for a long time: on his style the Zavattari painted in the fifteenth century the frescoes in the Chapel of Teodolinda in the Duomo of Monza, characterized by soft colors, stunned and weightless characters, taken from the courtly world.

The other strand beside the sweet style of Michelino was the grotesque one, taken from the works of Franco and Filippolo de Veris in the fresco of the Last Judgment of the church of Santa Maria dei Ghirli of Campione d’Italia (1400), or the expressive miniatures of Belbello from Pavia. For example in the Bible of Nicholas d’Este, miniata from Belbello in 1431 – 1434, they are used flowing lines and deforming, physically imposing figures, excessive gestures and bright colors and iridescent. At this vocabulary he remained faithful throughout his long career, until around 1470. Another famous manuscript that saw the collaboration of Belbello with the so-called Master of Vitae Imperatorum, character with unknown name already author of the copy of Svetonius ‘s Vite imperatorium conserved in the National Library of France, is the Semideus of Cato Sacco, today preserved in the Russian National Library .