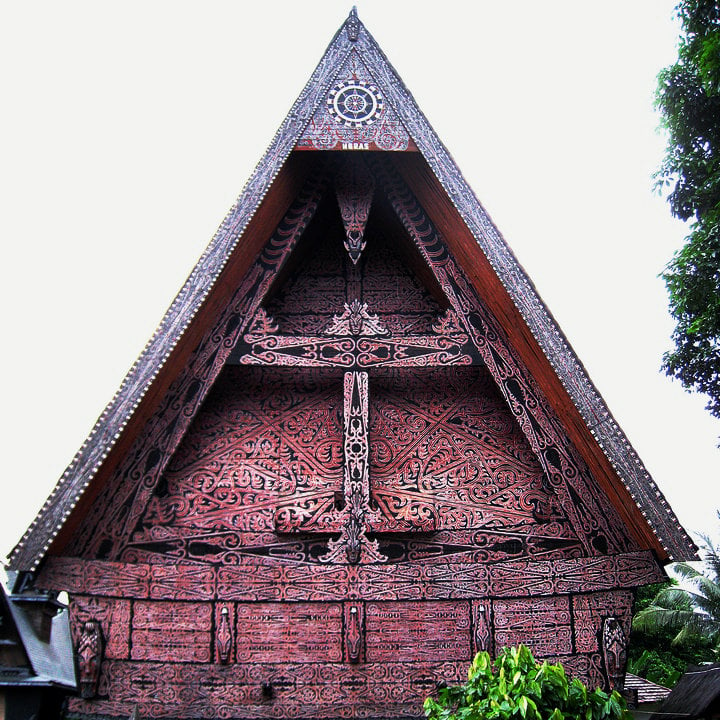 Gorga is a form of artistic decoration found in the culture of Batak Toba in North Sumatra, Indonesia. The gorga motif is in the shape of flourishes and undulations. The motif is either painted or carved onto wood using three colors: white, red, black; each corresponds with different realms in the Batak Toba cosmology. Gorga motif is often found in Batak Toba architecture e.g. a Batak Toba house or objects e.g. music instruments. They are meant to protect the building or object from spiritual harm e.g. evil spirits sent from neighboring village.

Gorga can be called a pattern or motif that is not only carved but also painted, and in general Gorga Batak uses only three colors: red , black , and white . Gorga have decorations or decorations made by sculpting wood, but now it has been partly direlif with cement in permanent batak houses and then painted with three different colors.

These three kinds of colors are called three boliths . The materials for Gorga are usually softwood that is easily scraped / carved. Usually the grandmother of the Batak people choose the wood ungil or there are also people call it Ingul wood. Ungil wood has certain properties, among others, resistant to direct sunlight, as well as rain water exposure, which means not quickly damaged / weathered due to sunstroke and rain water exposure. Ungil wood is also commonly used for the manufacture of ship / boat materials in Lake Toba .

Pattern and color
Gorga motif often decorates the surfaces of traditional houses and figural carvings. Gorga engravings are believed to protect the house against flood, earthquakes, and fire; and to repel the house against harm from the evil spirits. Gorga carving is made by outlining the floral or undulation motif onto the wood, and then the knife edge is placed at a cant, with the mallet tapping it along the line. To ensure a fine groove, a similar cut then is made with the knife and mallet canted in the opposite direction. Gorga painting can be found decorating the inside of Batak Toba houses, and not necessarily as carvings. Gorga uses the color red, black, and white. The tri-color is known as sitiga bolit, each symbolizes the tri-realm in the Batak cosmology: the white symbolizes the upper realm (banua ginjang), red symbolizes the middle realm (banua tonga), while black symbolizes the lower realm (banua toru). Traditionally, the red color is taken from batu hula, a kind of red-colored stone. White is taken from soft stone known as tano buro. Black color is taken from plants.

Dye Paint Materials
The paint materials for dye in ancient times naturally, the ancestors of the Batak Toba people created their own paint, namely:

Red Color Paint is taken from hula stone, a red colored natural stone that can not be found in all areas. The way to search also has special skills. This stone is pounded into smooth like flour and mixed with a little water, then applied to the engraving.
White Paint is taken from White ground, soft and soft ground in Batak language called Tano Buro. Tano Buro is milled until smooth and mixed with a little water, so it looks like a wall paint in the present.
Black Color Paint is made from a kind of plants that are pounded until smooth and mixed with ash powder or cauldron. The ash is scraped from a pot or a pot and put into the crushed leaves, then severed continuously until it produces like a black wall paint today.
Types of Batak Gorga
According to the way it works there are 2 types
Gorga Uhir is Gorga carved by using chisel and after ready to chisel new colored
Gorga Dais is Gorga which is painted with three colors of bolit paint. Gorga dais is a complement to the traditional house of Batak Toba. Found on the side of the house, and on the inside.
According to its shape
Viewed from the ornament and the pictures can also Gorga it has its own names are:

Gorga Ipon-Ipon : there is a section of the edge of Gorga; iponipon in Indonesian is Teeth. Humans without teeth are less attractive, so Batak carving, without the iphone-ipon very less beauty and harmony. Ipon-ipon is diverse, depending on the ability of the engraver to create it. Usually Gorga iphone-ipon is the width between two to three centimeters on the edge of the board with other words as a decorative edge is quite interesting.
Gorga Sitompi : Sitompi is derived from the word tompi, one of the Farmer’s tools that was hooked on the buffalo dileher at the time of plowing the fields. Gorga Sitompi is a beautiful species in the collection of Gorga Batak. In addition to its beauty, the possibility of the owner of the house deliberately ordered it to the builder Uhir (Pande) considering the services of the tool (Tompi) it to the buffalo and to humans.
Gorga Simataniari (Sun) : Gorga that depicts the sun, there are corners of the left and right of the house. This gorga is made by carpenters (Pande) considering the sun’s services that illuminate this world, because the sun also includes the source of all life, without the sun no one can live.
Gorga Desa Naualu (Eight Corners of the Wind Eyes) : This gorga depicts the image of the inflatable eye plus its ornaments. Batak people already know / know the wind. These winds already have close links to ritual activities or are used in the making of a person’s horoscope / family. As a reflection of the feeling of the importance of angina on the Batak tribe is done and realized in the form of Gorga.
Gorga Si Marogungogung ( Gong ) : In ancient times Ogung (gong) is something very precious thing. Ogung is not made in the country, reportedly Ogung imported from India. While the use is necessary at custom parties and even to the use of ritual ceremonies, such as to hold Gondang Malim (Sanctity ceremony). By having a set of omen that the family is a respected family. As memories of Ogung’s greatness and value as the image / condition of the homeowner, the Gorga Marogung-ogung was made.
Gorga Lion : By hearing or reading the words of the Lion it will cross our hearts and minds to the words: King of Forest, strong, strong, strong, capable, authoritative. Not everyone can build Gorga house caused by various factors including socio-economic factors and others. The person who is able to build the house of Gorga Batak is clearly a capable and authoritative person in his village. That is why the Lion Gorga is included in the collection of Gorga Batak
Gorga Jorgom : There are also people call it Gorga Jorgom or there is also call it Gorga Ulu Lion. Usually placed above the entrance to the house, the shape resembles animals and humans.
Gorga Boras Pati and Adop Adop (Bone Chest : Boras Starch is a kind of creature that resembles a lizard or lizard.Blaze Pati rarely appear or appear, usually if Boras Pati often appear, it signifies the plants become fertile and the harvest is successful both towards wealth ( hamoraon) Gorga Boras Starch is combined with a tuna (milk, tarus) .Those Batak view of milk (tetek) has a special meaning in which the great tap and the rushing water is a sign of the child’s health and many or have many offspring (gabe) So the combination of Boras Starch milk (tetek) is a symbol of Hagabeon, Hamoraon as the dream of Batak people.
Gorga Ulu Paung : Ulu Paung is at the top of Gorga Batak house. Without Ulu Paung Gorga Batak’s house becomes less dashing. In ancient times Ulu Paung was supplied (fill) with a magical metaphysical power. Besides as beautify the house, Ulu Paung also serves to fight begu fields (devils) coming from outside the village. Ancient Batak people often get black power attack from outside the house to make disputes within the house (family) so that it does not get along between husband and wife. Or make the inhabitants of home insomnia or fear also physical pain and various kinds of disharmony.
There are many more pictures on the wall or on the front of Batak’s house that is closely related to the personality history of the owner of the house. Like the picture of bulls, cypress trees, people on horseback, people binding buffalo. Pictures of Manukmanuk (birds) and bird ornaments Patia King symbol of science and others.

Architecture
In a Batak house, gorga motifs are carved or painted on specific areas of the house. Some examples are listed here: Gorga simataniari (“sun’s gorga”), a gorga-depiction of the sun, is carved on the left and right corner of a house as a symbol of life. Gorga ulu singa (“singa’s gorga”) represents the spiritual being singa of Batak mythology is placed on top of the front gable of a Batak house. Gorga boraspati depicts the gecko god Boraspati ni Tano and is usually carved on the side plank of a Batak house or barn houses; gorga baraspati is usually paired with gorga adop adop (“breasts gorga”), which represents the breasts; together, these represent fertility. Gorga ulu paung is carved on the top of a Batak house. The gorga ulu paung is imbued with metaphysical power and used to ward off evil spirit coming from outside the hamlet.