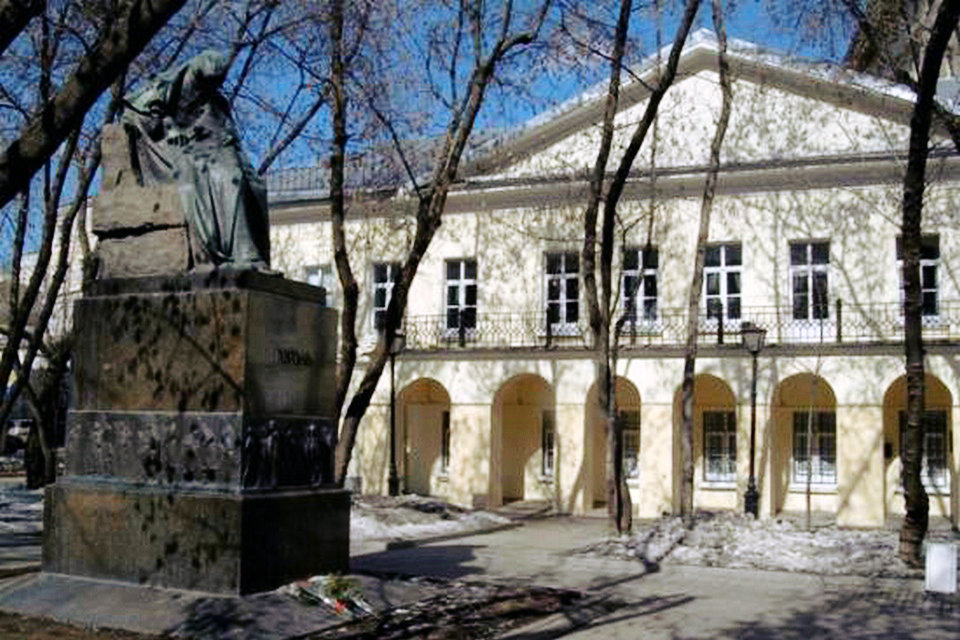 Gogol House – Memorial Museum and Scientific Library(Russian: Дом Гоголя — мемориальный музей и научная библиотека) on Nikitsky Boulevard is the only place in Moscow that keeps the memory of the last years of Nikolai Gogol alive. In this house, the writer worked on the second volume of Dead Souls. Here, he burnt the manuscripts of the poem. And in this very house, on February 21 (O.S.) of 1852 the writer died. It is home to Russia’s only museum of Nikolai Gogol, the State-Funded Cultural Institution “Gogol House — Memorial Museum and Research Library”.

Mykola Vasilievich Gogol was a Russian dramatist of Ukrainian origin. Although Gogol was considered by his contemporaries to be one of the preeminent figures of the natural school of Russian literary realism, later critics have found in his work a fundamentally romantic sensibility, with strains of surrealism and the grotesque (“The Nose”, “Viy”, “The Overcoat,” “Nevsky Prospekt”). His early works, such as Evenings on a Farm Near Dikanka, were influenced by his Ukrainian upbringing, Ukrainian culture and folklore. His later writing satirised political corruption in the Russian Empire (The Government Inspector, Dead Souls). The novel Taras Bulba (1835) and the play Marriage (1842), along with the short stories “Diary of a Madman”, “The Tale of How Ivan Ivanovich Quarreled with Ivan Nikiforovich”, “The Portrait” and “The Carriage”, are also among his best-known works.

Gogol`s house are located in the very centre of Moscow, near the Arbat Square, in an old city mansion, with its history dating back to the 17th century. “Gogol House” combines a research library of over 250 000 volumes, a research centre, an exhibition hall, and a memorial museum.

History:
The house where Nikolai Gogol spent the last four years of his life has a long history of its own. A unique piece of architecture and culture, it was built before the 1812 Fire of Moscow and has several times changed hands and been reconstructed.

Its first known owners were the Saltykov boyar family in the early 17th century, when it was a country house outside the town. In 1693 the land lot belonged to a courtier Ivan Buturlin and later, up to the mid-18th century, it was in the possession of another family, the Plokhovos.

Owned by Maria Saltykova (1759–1793), the wife of a chamberlain and privy councillor, the estate already had a city address (“the Mostryukov lane in the 3rd Arbat quarter, No 323”). In 1802 it yet included a number of wooden buildings, both dwelling and non-residential. The stone mansion was about 30 metres long and 25.6 metres wide, after Saltykova had its separate chambers integrated.

Under the next proprietor, government official Dmitri Boltin (1757–1824), the house was extended to reach 47 metres in length. The annex, built between 1806 and 1809, is exactly the part where Gogol lived afterwards. 1809 also saw the completion of a two-storeyed offices with servants quarters.

The 1812 Fire destroyed the wooden constructions and severely damaged the mansion and the utility building forcing Boltin to move to his manor in Nizhny Novgorod.

In 1816 the estate became the property of major general Alexander Talyzin, a Borodino battle veteran. Apparently, the dwelling was restored by 1822.

Following the overhaul, the mansion and the utility building acquired similar stone arcades and balconies making for a more consistent architectural impression. The mansion’s facade has remained unchanged since then.

After Talyzin’s death in 1847, the estate passed to his relative, a minor official’s wife. The same year, the upper floor of the mansion was rented by count Alexander Tolstoy, just back from Europe. His wife, Anna, most probably bought the estate as soon as late 1847 or early 1848. In December 1848, they welcomed Gogol who came to live with them.

According to the archives, in 1857 the estate still belonged to Anna Tolstaya. Wishing to add an extension on the northern side, she bought a neighboring land lot. In March 1876, under the next owner, Maria Stolypina, the wooden second floor in the eastern part of the mansion was rebuilt in stone.

Starting from 1878, the estate belonged to an actual state councillor’s widow, Natalya Sheremetyeva, who had two second-floor windows walled up in 1889.

After the 1917 Revolution, the mansion passed to the municipal fund and served as a residential house until 1964 (inhabited overall by 31 family or 77 people), when it was given to the permanent mission of the Kyrgyz SSR at the USSR Council of Ministers. By mid-1966 the building happened to include two organizations at once: the Kyrgyz mission and the editorial office of the Radio and Television magazine. The same year, however, it was handed over to municipal library No 2 which opened, in the new place, in 1971. In 1974, two museum rooms were established at the library. In 1979, the library was named after Nikolai Gogol. In 2005 the institution was transformed into the Central City Library — Memorial Centre “Gogol House”, and in 2009 — into State Budgetary Cultural Institution “Gogol’s House — Memorial Museum and Research Library“.

Museum:
In the heart of Moscow, on Nikitsky Boulevard, next to the Arbat Square, is an old town estate, whose ensemble began to take shape in the XVII century. Now here is the only museum in Russia, NV Gogol. Cast-iron gates lead to the courtyard, where you can linger near the monument to N. Gogol, created by NA Andreev for the 100th anniversary of the writer’s birth. On the right – an empire house with an arcade. Here Gogol spent the last three years of his life, died here on February 21, 1852. To the left of the monument is the “Carriage Shed”, the farm’s utility rooms.

Gogol settled in the house on Nikitsky in 1848 at the invitation of Count AP Tolstoy, a prominent statesman, and Countess AG Tolstoy, nee Princess of Georgia. Tolstoy and his wife were one of the few spiritually close friends of Gogol.

The exposition of the museum is located in the suite of rooms on the ground floor of the main house of the manor. In each of the rooms, the leading subject attracts attention. It is turned into a symbolic installation and expresses the accent of the room. In the hallway is the “chest of wanderings”, in the living room there is a fireplace, in the office there is a desk, in the “Inspector” hall there is an armchair, in the memory room – the posthumous mask of Gogol. Neighboring pieces of furniture and interior details are included in the image at the level of the actors of the “second plan”. The scientific concept of the museum exposition is embodied by the artist L. Ozernikov. Expansion of the museum space due to the use of modern technical means allows to achieve the effect of the presence in the world of the characters of Gogol. The museum contains original historical objects and works of art, as well as things belonging to Gogol.

In two rooms assigned to him on the ground floor, the writer worked on the second volume of Dead Souls. According to Gogol, the whole Russia should have been reflected in the work, wherever “the whole Russian man appeared with all the variety of riches and gifts that he had to share … and with all the many shortcomings that are in him.”

In the same Moscow, the last period of his life, the writer was preparing to print the second collection of his works, he worked on spiritual prose.

In this house Gogol burned part of his manuscripts 10 days before his death
All who came here, as a rule, found Gogol working standing at a high desk or copying the manuscript at the table. Writing, the writer often pronounced the text, playing whole skits.

The story of the meeting with Gogol in the house on Nikitsky in October 1851 was left by IS Turgenev: “His room was near the porch, to the right. We entered it, and I saw Gogol standing in front of the desk with a pen in his hand … From his sloping, smooth, white forehead, he still wore a mind … Gogol said a lot, with animation … everything went well , it is foldable, tasty and accurate. ”

November 5, 1851 in the hall of the first floor, to the left of the entrance, Gogol read the comedy “The Inspector General” to the actors of the Maly Theater. GP Danilevsky recalled this last public author’s reading: “Enchanted listeners stood for a long time in groups, transferring their impressions to each other in low tones. Schepkin, wiping away his tears, embraced the reader … “.

According to the museum scenario, in the right half of the house the visitor passes the path of Gogol the writer, in the left – Gogol, reading his works
The second floor of the exposition introduces Gogol’s books, studies about his life and work. Portraits of the owners of the house, engravings, lithographs with kinds of memorable places connected with the writer’s name are presented. According to legend, one of the music albums – Mendelssohn’s musical plays in German, located in the music and music department (theater salon), belonged to Countess A. Tolstoy.

The new, expanded and enlarged exposition of the museum was opened on March 27, 2009, to mark the 200th anniversary of the birth of the writer. “Gogol’s House” provides an opportunity to satisfy the spiritual, intellectual and information needs of all categories of visitors.

Library:
Today, the readers of Gogolevka are mostly young people from 18 to 30, accounting for about 80% of users. Most of them are students of various liberal arts universities in Moscow. Forming its foundation, the library focuses primarily on this reader category, as well as on specialists involved in the study of the literary heritage and biography of NV Gogol. After the restoration of the Gogol House, the rooms for readers combine the details and motifs of the interior of the 19th-century Noble Library. with modern equipment and technologies.

A feature of the Gogol House book fund is its humanitarian orientation. This is due to the scientific activities of the Memorial Center, and our close cooperation with humanitarian universities, located, like the Gogol House, in the historic center of Moscow. In the reading room and on the subscription you can find books on philosophy, literary criticism, psychology, art, religious and fiction. Particular attention is paid to editions of Nikolai Gogol’s works, as well as to materials related to his life and work.

The library provides basic services free of charge, additional services are provided free of charge or on a fee basis. Services can be obtained by directly visiting the library and in remote access mode.