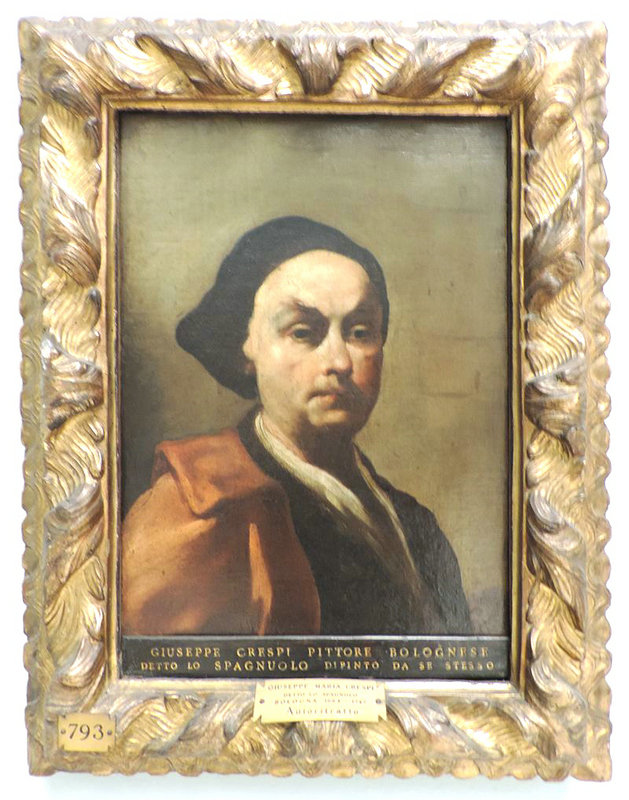 Giuseppe Maria Crespi (March 14, 1665 – July 16, 1747), nicknamed Lo Spagnuolo (“The Spaniard”), was an Italian late Baroque painter of the Bolognese School His eclectic output includes religious paintings and portraits, but he is now most famous for his genre paintings

Crespi was born in Bologna to Girolamo Crespi and Isabella Cospi His mother was a distant relation of the noble Cospi family, which had ties to the Florentine House of Medici He was nicknamed “the Spanish One” (Lo Spagnuolo) because of his habit of wearing tight clothes characteristic of Spanish fashion of the time

By age 12 years, he apprenticed with Angelo Michele Toni (1640–1708) From the age of 15–18 years, he worked under the Bolognese Domenico Maria Canuti The Roman painter Carlo Maratti, on a visit to Bologna, is said to have invited Crespi to work in Rome, but Crespi declined Maratti’s friend, the Bolognese Carlo Cignani invited Crespi in 1681–82 to join an Accademia del Nudo for the purpose of studying drawing, and he remained in that studio until 1686, when Cignani relocated to Forlì and his studio was taken over by Canuti’s most prominent pupil, Giovanni Antonio Burrini From this time hence, Crespi worked independently of other artists

His main biographer, Giampietro Zanotti, said of Crespi: “(He) never again wanted for money, and he would make the stories and caprices that came into his imagination Very often also he painted common things, representing the lowest occupations, and people who, born poor, must sustain themselves in serving the requirements of wealthy citizens” Thus it was for Crespi himself, as he began a career servicing wealthy patrons with artwork He is said to have had a camera optica in his house for painting By the 1690s he had completed various altarpieces, including a Temptation of Saint Anthony commissioned by Count Carlo Cesare Malvasia, now in San Niccolò degli Albari

He journeyed to Venice, but surprisingly, never to Rome Bearing his large religious canvas of Massacre of the Innocents and a note from Count Vincenzo Rannuzi Cospi as an introduction, Crespi fled in the middle of the night to Florence in 1708, and gained the patronage of the Grand Duke Ferdinand I de’ Medici He had been forced to flee Bologna with the canvas, which while intended for the Duke, had been fancied by a local priest, Don Carlo Silva for himself The events surrounding this episode became the source of much litigation, in which Crespi, at least for the next five years, found the Duke a firm protector

An eclectic artist, Crespi was a portrait painter and a brilliant caricaturist, and was also known for his etchings after Rembrandt and Salvator Rosa He could be said to have painted a number of masterpieces in different styles He painted few frescoes, in part because he refused to paint for quadraturists, though in all likelihood, his style would not have matched the requirements of a medium then often used for grandiloquent scenography He was not universally appreciated, Lanzi quotes Mengs as lamenting that the Bolognese school should close with the capricious Crespi Lanzi himself describes Crespi as allowing his “turn for novelty at length to lead his fine genius astray” He found Crespi included caricature in even scriptural or heroic subjects, he cramped his figures, he “fell in to mannerism”, and painted with few colors and few brushstrokes, “employed indeed with judgement but too superficial and without strength of body”

One celebrated series of canvases, the Seven Sacraments, was painted around 1712, and now hangs in the Gemäldegalerie, Dresden It was originally completed for Cardinal Pietro Ottoboni in Rome, and upon his death passed to the Elector of Saxony These imposing works are painted with a loose brushstroke, but still maintain a sober piety Making no use of hieratic symbols such as saints and putti, they utilize commonplace folk to illustrate sacramental activity

Crespi is best known today as one of the main proponents of baroque genre painting in Italy Italians, until the 17th century, had paid little attention to such themes, concentrating mainly on grander images from religion, mythology, and history, as well as portraiture of the mighty In this they differed from Northern Europeans, specifically Dutch painters, who had a strong tradition in the depiction of everyday activities There were exceptions: the Bolognese Baroque titan of fresco, Annibale Carracci, had painted pastoral landscapes, and depictions of homely tradespeople such as butchers Before him, Bartolomeo Passerotti and the Cremonese Vincenzo Campi had dallied in genre subjects In this tradition, Crespi also followed the precedents set forth by the Bamboccianti, mainly Dutch genre painters active in Rome Subsequently this tradition would also be upheld by Piazzetta, Pietro Longhi, Giacomo Ceruti and Giandomenico Tiepolo to name a few

He painted many kitchen scenes and other domestic subjects The painting of The Flea (1709–10) depicts a young woman readying for sleep and supposedly grooming for a nagging pest on her person The environs are squalid—nearby are a vase with a few flowers and a cheap bead necklace dangling on the wall—but she is sheltered in a tender womb of light She is not a Botticellian beauty, but a mortal, her lapdog asleep on the bed-sheets

In another genre scene, Crespi captures the anger of a woman at a man publicly urinating on wall, with a picaresque cat also objecting to the man’s indiscretion

True to his eclecticism, is the naturalistic St John Nepomuk confessing the Queen of Swabia, made late in Crespi’s life In this painting, much is said by partially shielded faces His Resurrection of Christ is a dramatic arrangement in dynamic perspectives, somewhat influenced by Annibale Carracci’s altarpiece of the same subject

While many came to work in the studio, Crespi established after Cignani’s departure, few became notable Antonio Gionima was moderately successful Others included Giovanni Francesco Braccioli; Giacomo Pavia; Giovanni Morini; Pier Guariente; Felice and his brother Jacopo Giusti and Cristoforo Terzi He may also have influenced Giovanni Domenico Ferretti While the Venetian Giovanni Battista Piazzetta claimed to have studied under Crespi, the documentation for this is nonexistent

Two of Crespi’s sons, Antonio (1712–1781) and Luigi (1708–1779) became painters According to their account, Crespi may have used a camera obscura to aid in depiction of outdoor scenes in his later years After his wife’s death, he became reclusive, rarely leaving the house except to go to daily mass