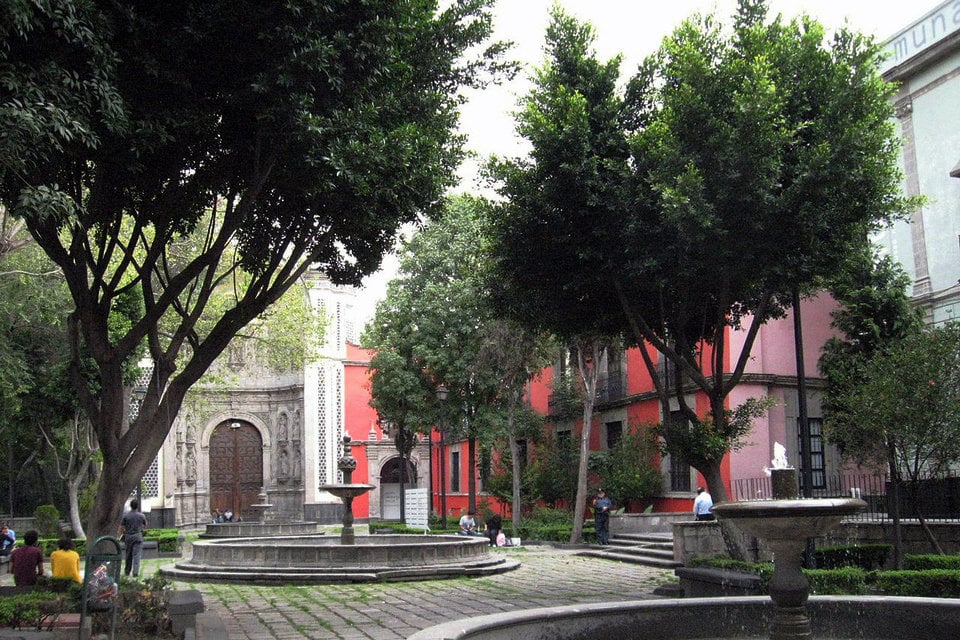 The Franz Mayer Museum, located in Mexico City, is one of Mexico’s most recognized museums on decorative arts. It was founded with the private collection of the businessman of the same name, of German origin. It houses the main collection of decorative arts in Mexico and presents temporary exhibitions of design and photography.

The collection allows us to appreciate pieces from different backgrounds, materials and styles from the 16th to the 19th centuries, mainly from Mexico, Europe and the East. The collection consists of pieces of silverware, ceramics, furniture, textiles, sculptures and paintings.

The building currently occupied by the museum is a place full of history. For four centuries it functioned as a hospital institution, standing out as the first hospital in America of the Order of San Juan de Dios.

The cloister, which due to its beauty is one of the attractions of the museum, serves as a framework for temporary exhibitions and through it you can access three rooms set from the viceroyalty: a dining room, a cabinet and a chapel.

In the high cloister is the Library open to the public and where there are also exhibits of the bibliographic collection. It protects more than 14,000 volumes, among which old and rare books, historical documents and 800 editions of El Ingenioso Hidalgo Don Quijote de La Mancha stand out.

The Franz Mayer Museum encourages innovation and creativity in society by preserving, researching and disseminating art and design through its permanent collections and its temporary programs. It seeks to be an institution of excellence that provides experiences of knowledge, enjoyment and learning to all audiences contributing to the training and development of the human being.

History
It occupies a unique building from the second half of the sixteenth century, of great heritage and architectural value and that throughout its 400 years of history has had multiple uses.

In the middle of the 16th century, the space was occupied by the Casa del Peso de la Flour, an alhondiga that was used to store flour. Later, in 1586, the Hospital de los Desamparados was founded and in 1604 the order of San Juan de Dios began to take over the premises. It is during this period that the building adopts the architectural structure that characterizes it, called “conventual hospital type”, because its cloister is connected to the Church of San Juan de Dios towards the choir and the sacristy.

After 200 years of work the religious orders are expelled from the building and the hospital administration passes to the City of Mexico City.

During the Second Mexican Empire, Maximiliano de Habsburgo decrees the creation of a Health Institute in the hospital facilities that offered care to prostitutes, specializing in the treatment of venereal diseases. It remained as a Women’s Hospital with different names for several years and in 1931 it is declared a historical monument.

In 1981, the Federal Government, supported by a restoration program of the Historic Center, granted the Old Hospital of San Juan de Dios to the Franz Mayer Cultural Trust, rescuing the monument from the collapse. After a year of conditioning and rescue of the property, the historical monument is prepared to house the Franz Mayer Museum and its collections.

The Franz Mayer Museum is committed to the conservation of this significant space on whose walls it is possible to find decorative or structural elements of the original building that dialogue with the objects of the museum. Thus, the artistic heritage protected within a viceregal building listed as a historical monument makes the site itself one more piece of the collection.

Building
The history of the building dates back to the beginning of the viceroyalty. In 1582, the property, hitherto the House of the weight of the flour, was ceded to Pedro Lopez, the first physician in medical graduate of the Royal and Pontifical University of Mexico, who became Hospital de los Desamparados.

At the beginning of the 17th century, the hospital was in charge of the Hospital Order of San Juan de Dios; It also hosted the novitiate and preparation site for the brothers in the care of the sick and the foundation of new hospitals.

When the hospital orders were abolished in the country in 1820, the hospital passed to the City Council and, later, the Sisters of Charity took care of it.

In the second half of the 19th century, Emperor Maximilian of Habsburg dedicated him to the medical care of prostitutes.

In Mexico of the twentieth century, it was transformed into the Women’s Hospital.

The current construction belongs mostly to the eighteenth century with some adaptations made in later times.

Franz Mayer
The vocation collector and mentality philanthropy of Franz Mayer made possible the creation of this museum.

Born in Mannheim, Germany in 1882 in a traditional German family with Jewish roots. He arrived in Mexico in 1905 where he established himself as an independent stock broker and remained active in the stock market, even being the protagonist of the founding of the Mexican Stock Exchange. His intense financial activity allowed him to make an important fortune and a network of contacts that were very useful to carry out his collector’s work.

For Franz Mayer, collecting was more than a hobby, it was an intellectual exercise where the selection of objects was carried out carefully, also based on expert opinion. The collection shows the interest that the collector had towards certain pieces, techniques and periods, influenced by the taste of the time and the books he consulted.

His financial ability allowed him to have important resources that enabled the creation of a collection of more than 10,000 objects.

His concerns were not only limited to collecting, he also devoted himself to photography, portraying for years the cultural diversity of the country, as well as the cultivation of orchids and carnations.

The desire to inherit his collection to the people of Mexico for his enjoyment and study motivated him to create a trust in the Bank of Mexico to take over the administration of the museum, which opened its doors on July 15, 1986, eleven years later of his death.

Collection
Through time, societies have sought to beautify everyday objects, thus bringing together the two characteristics of decorative arts: utility and beauty. Testimony of the cultures that produced them, the decorative arts tell us about the tastes of an era, the fashions, the craftsmen who intervened in their manufacture.

Most of the collection covers the viceregal era, 16th to 19th centuries. Life in this period was shaped from a series of traditions that converged. This resulted in a particularly rich cultural world in which Indian reminiscences, European adaptations and oriental, legal forms coexisted from a strong commercial tradition. The fusion of all these inheritances was what gave character and unique structure to New Spain.

It houses a permanent collection made up of objects that span 6 centuries of creation and innovation in the fields of art and design, beginning in the fifteenth century.

The collection was formed through several stages in Franz Mayer’s life, which were defined by the market situation, his travels and the historical moment he was living. His first acquisition was a batch of tiles belonging to other buildings, including the House of Tiles. These pieces were the beginning of a multifaceted and valuable collection where, in addition to ceramics, the collections of furniture, photography, silver or paint stand out, as well as the wide collection of watches, household goods, textiles and cartography.

With the passage of time the collection was refined with the help of experts in each subject and with the specialization that Franz Mayer himself acquired through the study of various topics related to his collection, until he was recognized for the unsurpassed quality of many works that the form. Acculturation, the diversity of techniques and materials, as well as the different contexts to which they belong make this collection an inexhaustible source of study.

It is the importance of the Franz Mayer Collection that has allowed pieces of singular value to have projection beyond the museum and be part of temporary exhibitions in Mexico and abroad.

The main genres that make up the franz mayer museum collection are:

Ceramics
This collection, one of the most important in the country, is mainly composed of glazed ceramics from the viceroyalty, independent Mexico and Europe, as well as oriental porcelain manufactured for the western market.

Silver
Formed mostly by liturgical pieces, this collection allows us to observe the transformations of ornamentation over four centuries.

Furniture
A fundamental part of the collection, the furniture allows to know the lifestyles and tastes mainly of the high society of New Spain.

Sculpture
Devotional sculptures from Europe, New Spain and Guatemala, with their diversity of size, polychromy, stew or gold, highlight the variations of styles, manufactures and techniques.

Painting
The art gallery is composed of important works by European and Mexican authors, whose production covers a period of time from the fifteenth to the twentieth centuries.

Other genres that complement the collection are: iron, feather art, lacquers, hawksbill, ivory, executives of nobility, engravings, glass and enamels. To illustrate the utilitarian and decorative value of the objects you can visit period atmospheres: a chapel, a room, a dining room, a cabinet of curiosities, as well as a dais of a Novohispana house.

Library
It protects a collection of books dated between the sixteenth and nineteenth centuries, various publications specialized in the study of art and design, and a large number of catalogs of auctions and exhibitions of national and international museums.

The collection stands out for the historical and content value of its works, which is organized in different funds. The Fund of ancient and rare books, whose period includes the years between 1484 and 1799, protects copies such as European incunabula, bibles, missals, manuscripts, choir books and executives of nobility. On the other hand, the collection of historical documents includes testimonies, property titles and tax reports, mostly from the 19th century. Likewise, the Conventual Fund consists of 420 manuscripts bound in parchment that come from different religious orders and whose themes are very varied. Moreover, the Cervantes Fund, one of the most important collections of the Cervantes work in America, is made up of almost 800 editions of Don Quixote de la Mancha in 19 languages. Between them,

While the original collection responds to Franz Mayer’s interests in books and old documents, the collection is constantly enriched with contemporary editions and titles that maintain their current content and function as a research tool. Today, the library has about 22.00 copies organized in its different funds.