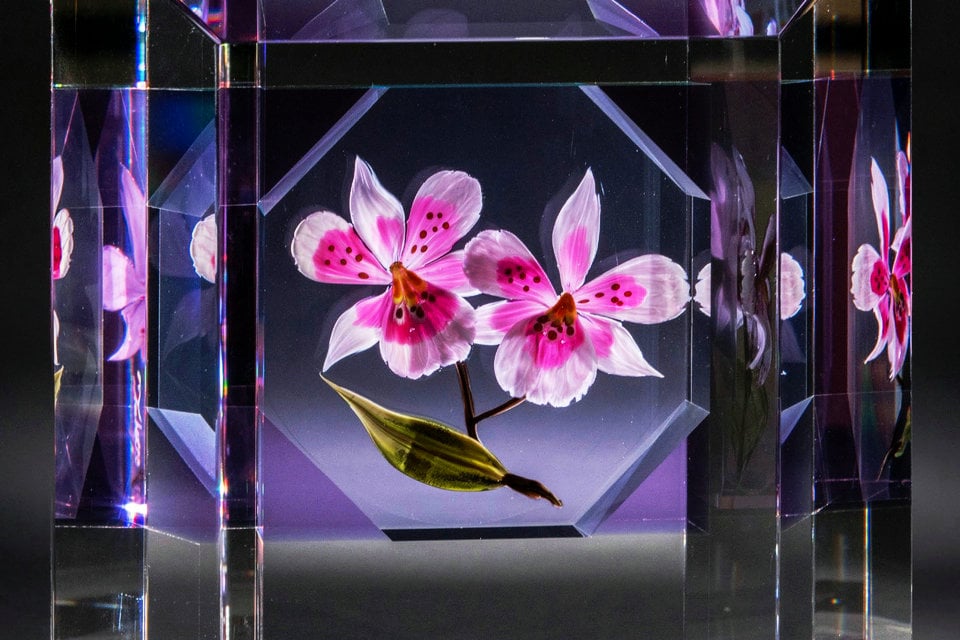 Lampworking, or flameworking, is the process of shaping glass by softening it over a flame using simple tools. The earliest evidence of this process dates to the 5th century BCE for making beads. In the 18th century, small figures and glass tableaus were created in Nevers, France and parts of Italy using this method. Oil or fat burning lamps were used for beadmaking until 1843 when Domenico Bussolin invented a gas torch in Venice. This technology increased the consistency of the heat and expanded the ability for makers to work. When paperweights became popular, lampworking provided another method for making interior designs, with flowers among the most popular Victorian motif. As the technique became more popular in the 20th century, artists have encouraged the use of the term flamework to eliminate the reference to oil lamps that are no longer in use. The process provides much flexibility to create small objects without the investment in hot glass equipment. This has provided an economical way for artists to create with glass.

Single Flowers
The height of paperweight popularity spanned from 1845 to approximately 1860. During this period the French factories Baccarat, Saint-Louis and Clichy created millefiori patterned weights, a commemorative portrait style referred to as sulphides, and several stylized lampwork floral designs inspired by the Victorian interest in gardening. Single flowers were most frequently created by these factories.

Clematis with Honeycomb Center Cane Paperweight (c.1845-1855)
The Baccarat factory made several clematis type flowers. This example is a rare color that is further enhanced with an alternating color ring of canes. The flower is centered over a star-cut base.

The center of this clematis flower is detailed using what is called a honeycomb millefiori cane. This seemingly minor detail adds importance to this piece.

Thousand Petal Rose Paperweight (c.1845-1855)
The simple elegance of a single flower is beautifully portrayed in this multi-petaled rose and naturalistic bud. Expert Paul Jokelson once cited this among the 100 most important paperweights.

Buttercup Paperweight (mid-19th century)
This buttercup flower is a remarkable example of the best paperweights Baccarat created. The design is centered, the leaves enhance the composition and the addition of the red bud enhances the rarity.

Here you see the central stamen is made of star shaped canes and the outer edges of the yellow petals show a white lining. This demonstrates the use of multi colored canes used for shaping the petals.

Salmon Gentians Paperweight (c.1845-1855)
Baccarat created variety, even though the designs were often stylized. The gentian is relatively rare and an almost perfect example. The flowers and leaves are formed from multi-layered canes.

Crown Imperial Paperweight (1845-1855)
This crown imperial floral design is a very rare and beautiful example. It was not native to Europe, but cultivated. The name refers to the Emperor’s Crown. Baccarat created very few these.

Violets Paperweight (c.1845-1865)
Flowers carried distinct meanings in the Victorian Era. When grouped, they often carried a message. The violet stood for modesty, and in this notable example by Clichy, the small bud drops its head slightly.

Single Rose on Double Latticinio Cushion Paperweight
This almost perfectly made example by Clichy uses a rose cane to construct the flower on a stem, along with a bud. This popular single rose design is set against an almost perfect white latticinio ground.

Single Rose Hollow Paperweight (c.1850)
A single white rose has always stood for purity. Here, this delicate and extraordinarily crafted flower is centered in a hollow dome. It is unique, suggesting it was possibly made for someone.

Buttercup on Jasper Ground Paperweight (1852-1880)
This American paperweight is a simple design set against a ground of crushed red and white glass. The buttercup flower has two disparate meanings: charm and ingratitude.

Floral Bouquets
Flameworked paperweights of the 19th century offered a variety of compositions and demonstrated the extraordinary skills of the makers in the factory, as well as their ingenuity. Paperweights made in a factory setting were made by hand, but not necessarily one artisan from start to finish. They represent the pooled specialized skills of several workers. The resulting compositions are an enchanting mix of varied floral designs with both naturalistic and fantasy flowers with fanciful cane centers and stylized leaves. Some of the very rare works demonstrate extraordinary sensibilities in color and composition that were possibly made by a single artist, and were likely made as unique gifts or presentation pieces.

Three Flower Bouquet with Ribbon Paperweight (1845-1855)
This composition of stylized flowers includes a pink rose cane which Clichy adapted from the Italians as a signature characteristic, making these paperweights highly prized.

Tied with a pink ribbon, this floral trio sends a sentimental message to its receiver.

Full Bouquet Paperweight (1845-1848)
This large and ambitious design is unique, and possibly inspired similar later paperweights by Saint-Louis. It combines lampworked flowers with millefiori canes to make an outstanding bouquet.

Paperweights of this period were not always signed. Some characteristics helped to identify them. The bold clear colors of this weight and yellow flower centers link them to the Saint-Louis factory.

The Modern Masters
The magnificently crafted paperweights of the 19th century were not made beyond 1878. Their beauty inspired 20th century makers to pursue the masterful techniques, and many of them brought skills from the scientific glass industry to create pieces of artistic expression. Charles Kaziun was one of the first Americans to investigate these remarkable processes in the 1940s. More makers followed and slowly transitioned this 19th century art form into a contemporary format.

Morning Glory on Trellis with Gold Foil Bees (1969)
This delicate work by Kaziun was a gift to Evelyn Campbell Cloak, the Bergstrom-Mahler Museum curator who encouraged his work. Morning glories on a trellis are embellished with gold leaf additions.

Clematis (1970)
This is a small but powerful experiment by Paul Stankard. Ironically, he tried to copy all of the traditional antique design characteristics in this very early work, only to build a career of change.

Swamp Sparrow with Snowdrops and Mushrooms (1988)
Rick Ayotte immediately set his flameworking skills toward creating his own contemporary language by sharing his love of nature. He specialized in depicting birds within their natural surroundings.

Gingham Cut Double Overlay Paperweight (1986)
Bob Banford attempted and mastered a very difficult design in which the red and white layers of color are cut in an intricate gingham pattern. This was inspired by the extraordinary work of 19th century craftsman.

The red and white layers of glass are applied hot completely covering the clear glass and floral design: first white, then red. When cooled, it looks like a red ball until the cutting begins exposing the other layers.

Meadow of Flowers (1996)
This is an extraordinarily ambitious multi-floral work by Debbie Tarsitano. It was made as a tribute to her father with whom she shared a studio. The composition is full, fresh, vibrant and delicate.

Rose Botanical (1982)
As 20th century glass artists honed their skills to create a modern message, they also expanded the paperweight form.This experimental form changed Stankard’s career and opened a path for others.

Water Lilies and Spirits Botanical Cube (1989)
This cube form was another experiment for Stankard, as well as the watery feel of the composition. His ability to create naturalistic depictions freed the paperweight from its 19th century boundaries.

Charm Orchid (1996)
As glass artists were freed from the prescribed designs in paperweights of the original 19th century format,they used their extraordinary skills to create sculptural works in larger scale.

Blackberry Tetrahedron (c.2003)
In the 21st century, artists are able to continue the traditional paperweight spheres with designs viewed from above or explore new formats that are multi-dimensional.

Berry Bouquet with Spirits Cloistered Botanical (1992)
Nineteenth century paperweights were often enhanced by a colored background. Here the change of shape and the dark background adds both dimension and drama to support this contemporary detailed columnar composition.

Stankard introduced narrative into his compositions, adding personal expression to this art form. His remarkable detail shows small figures or “root people” nurturing the plant from underneath.

Red Iris (2008)
Peering into this dramatic dark sphere is like finding delicate wildflowers surviving in the woods. New skills, shapes, compositions and meaning have redefined a 19th century art form for a new era.