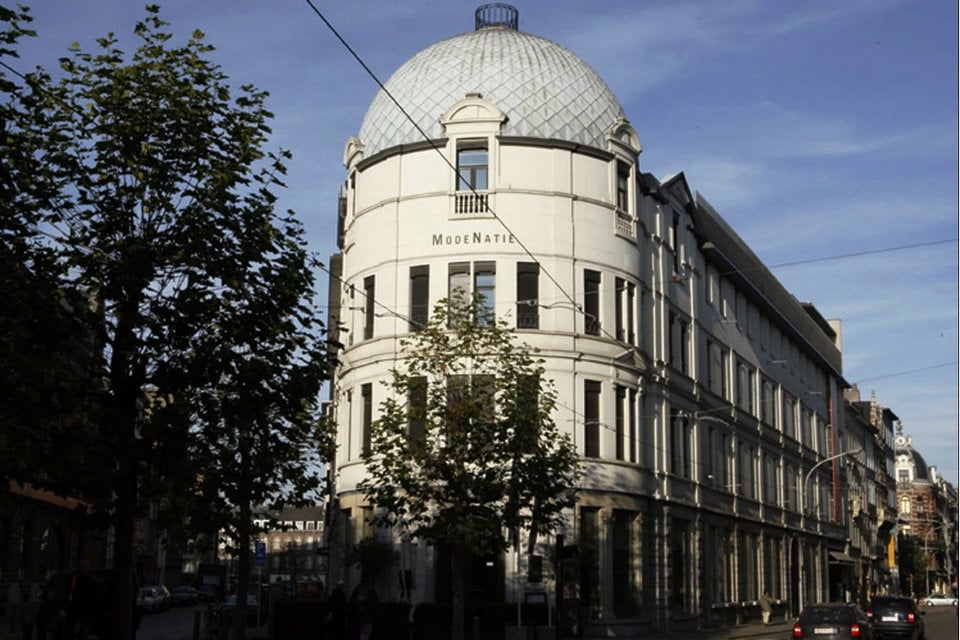 MoMu (Mode Museum) is the fashion museum of the Province of Antwerp, Belgium. Founded on 21 September 2002, the museum collects, conserves, studies and exhibits Belgian fashion. The museum is specifically focusing on Belgian contemporary fashion designers due to the arisen of a group of Antwerp-trained fashion designers during the Eighties and Nineties(Martin Margiela, Dries Van Noten, Ann Demeulemeester, Walter Van Beirendonck, Dirk Van Saene, A.F. Vandevorst, etc.). The museum’s first director was Linda Loppa who was also the founder and the director of the Fashion school of the Royal Academy of Fine Arts (Antwerp). The current director is Kaat Debo.

MoMu will have additional exhibition space for its collection. Visitors will be able to get acquainted with Belgian fashion and discover the inspiring stories of the Antwerp Six and the fashion department of the Royal Academy.

Architecture
The building of the ModeNatie dates from the 19th century, when it served as a ‘New England’ clothing store for men and children. During the 20th century the building often changed ownership until in 2000 it was decided to renovate it under the watchful eye of the Ghent architect Marie-José Van Hee. Van Hees most important achievement was the creation of a covered passage between Nationalestraat and Drukkerijstraat. The architect also built an impressive wooden staircase, which she calls the second vertical passage of the ModeNatie. Both the stairs and the passage are made of Merbau wood.

Collection
MoMu has a collection of more than 33,000 items: clothing, shoes, textile, accessories, lace,…. Clothing and accessories form the core of the collection that came about through purchases, but also through donations from private individuals, designers and fashion houses and through a number of long-term loans. For example, the early gifts from Linda Loppa and Christine Matthijs kicked off MoMu’s designer collection. This sub-collection was enriched with generous donations from, among others, Dries Van Noten and Bernhard Willhelm. But also with long-term loans, including 100 silhouettes by Walter Van Beirendonckin 2012, a few dozen designer shoes and more than 100 hats from British designer Stephen Jones by collectors and founders of the Antwerp Coccodrillo shoe store Geert Bruloot and Eddy Michiels. The museum collection was expanded by a few hundred pieces in 2012 through the donation and the partial purchase of the collection of historical fashion from the Dutch collectors Jacoba de Jonge. Together with the former collections of the former Textile and Costume Museum Vrieselhof, MoMu today manages a collection of around 33,000 objects that are largely kept in the home.

The collection consists of clothing, accessories, and textiles, as well as more unexpected pieces such as tools, machines for textile production, patterns, and fashion show invitations.

MoMu’s collection policy focuses on the work of Belgian designers and alumni of the Fashion Department of the Royal Academy of Fine Arts in Antwerp. Prominent names from the contemporary international fashion world are also represented in the collection.

The collection grows every year through acquisitions, loans, and numerous donations, and now consists of over 33,000 pieces. This makes the MoMu collection the largest and most important collection of contemporary Belgian fashion in the world. The museum continually receives international loan requests for pieces from its designer collection.

In 2011, the historical collection was enlarged with an important acquisition. Over 2,000 objects from the 18th, 19th, and first half of the 20th century were acquired from the private collection of Ms. Jacoba de Jonge, complementing the existing MoMu collection.

In addition to the fashion and costume collection, the museum also houses a vast library collection. The MoMu library is an academic library for historical and contemporary fashion, textiles, and ethnic costume. With over 15,000 books, an archive full of valuable reference works, hundreds of contemporary and historical magazines, and a fast-growing digital database of images, the MoMu library is one of the top in its field worldwide.

The study collection comprises historical, contemporary and ethnic clothing, fragments and samples. This more accessible collection consists of a donation by Ms. Jacoba de Jonge, a long-term loan from the Department of Conservation-Restoration at the University of Antwerp and pieces from MoMu.

Collection management
Depending on their nature and condition, the pieces are packaged in acid-free cardboard boxes or hung on clothes hangers with dust covers. In 2013, an interdisciplinary study started on the preservation and handling of natural and synthetic fibers and materials in a museum setting. Endangered documents are treated internally or externally and often in collaboration with the textile conservation courses.