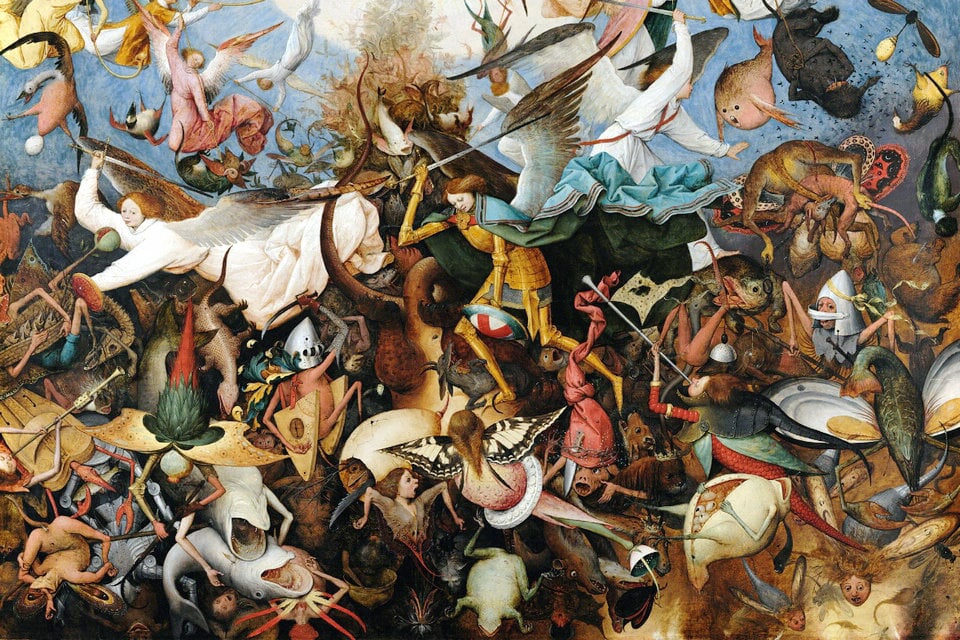 Fantastic art is a broad and loosely defined art genre. It is not restricted to a specific school of artists, geographical location or historical period. It can be characterised by subject matter – which portrays non-realistic, mystical, mythical or folkloric subjects, events and style, which is representational and naturalistic, rather than abstract – or in the case of magazine illustrations and similar, in the style of graphic novel art such as manga.

Fantasy painting is an art depicting a fantastic motif. It is an illusion when supernatural things and abnormal things invade into the familiar reality world, which is different from a fantasy such as a fairy tale premised on another world from the beginning.

Fantasy has been an integral part of art since its beginnings, but has been particularly important in mannerism, magic realist painting, romantic art, symbolism, surrealism and lowbrow. In French, the genre is called le fantastique, in English it is sometimes referred to as visionary art, grotesque art or mannerist art. It has had a deep and circular interaction with fantasy literature.

The subject matter of Fantastic Art may resemble the product of hallucinations, and Fantastic artist Richard Dadd spent much of his life in mental institutions. Salvador Dalí famously said: “the only difference between me and a madman is that I am not mad”. Some recent Fantastic Art draws on the artist’s experience, or purported experience, of hallucinogenic drugs.

The term Fantasy Art is closely related, and is applied primarily to recent art (typically 20th century onwards) inspired by, or illustrating, fantasy literature. The term has acquired some pejorative overtones.

Fantastic art has traditionally been largely confined to painting and illustration, but since the 1970s has increasingly been found also in photography. Fantastic art explores fantasy, imagination, the dream state, the grotesque, visions and the uncanny, as well as so-called “Goth” art.

Fantastic Art Features:
Fantastic is when supernatural or unusual things invade into the familiar reality world . In the world of myths and fairy tales from the beginning, another world is the premise, it is not fantastic, it becomes a furistic dream. Roger Kaiyowa also touched something to exclude in the book and created a dreamlike creative world without contact with the real world is a marvelous intentional fantasy and excluded this and it is a story, legend, myth, religion, madness Widespread anomalous illusions such as delusions, depending on the expression technique, it was decided to truncate it.

Basically the style of fantasy painting is a concrete painting as realism. And its surface is often smooth. It is because the painter’s vision and image are drawn like mirror images in the back of the two dimensional surface. Moreover, the way of describing it is often precise. Fantasy painters are involved in sculpture and crafting, not necessarily only in the 2D plane, there are also fantasy artists with the concept of architectural works.

Genres which may also be considered as Fantastic Art include the Symbolism of the Victorian era, and Surrealism. Works based on classical mythology, which have been a staple of European art from the Renaissance period, also arguably meet the definition of Fantastic Art, as art based on modern mythology such as JRR Tolkien’s Middle Earth mythos unquestionably does. Religious art also depicts supernatural or miraculous subjects in a naturalistic way, but is not generally regarded as Fantastic Art.

Furthermore, it is inspired by fantasy literature and SF novels, and there are illusion paintings born in trying to visualize them.

Fantastic Art History :
The range of fantasy painting can be found in the history of Western art is quite broad, and in general it is often the beginning of the area around Hieronimus Bosch (Hieronimus Bosch; around 1450 – 1516), but then William Blake Blake; 1757 – 1827), from the frontier of Raphael, symbolism and its surroundings, the rustic school around the end of the century, Surrealism before and after the World War, the Viennese fantasy after the war in the postwar period, the Robbrow Art of the 1970s (Pop Surrealism ), There are works that can be called fantasy painting regardless of age and country.

Many artists have produced works which fit the definition of fantastic art. Some, such as Nicholas Roerich, worked almost exclusively in the genre, others such as Hieronymus Bosch, who has been described as the first “fantastic” artist in the Western tradition, produced works both with and without fantastic elements, and for artists such as Francisco de Goya, fantastic works were only a small part of their output. Others again such as René Magritte are usually classed as Surrealists but use fantastic elements in their work. It is therefore impossible to give an exhaustive list of fantastic artists, but a selection of major and influential figures is listed below.

Genres and Themes:
Genres which may also be considered as Fantastic Art include the Symbolism of the Victorian era, and Surrealism. Works based on classical mythology, which have been a staple of European art from the Renaissance period, also arguably meet the definition of Fantastic Art, as art based on modern mythology such as JRR Tolkien’s Middle Earth mythos unquestionably does. Religious art also depicts supernatural or miraculous subjects in a naturalistic way, but is not generally regarded as Fantastic Art.

Spells and Demons: The demonic representations are inspired by Christianity, in the paintings of Jerome Bosch, John Martin, Goya, Félicien Rops, Salvador Dalí.

Gigantism: which refers to exaggerated proportions. Example: a giant, as Francisco Goya staged in his painting Saturn devouring his children.

Development:
The rise of fantasy and science fiction “pulp” magazines demanded artwork to illustrate stories and (via cover art) to promote sales. This led to a movement of science fiction and fantasy artists prior to and during the Great Depression, as anthologised by Vincent Di Fate, himself a prolific SF and space artist.

In the United States in the 1930s, a group of Wisconsin artists inspired by the Surrealist movement of Europe created their own brand of fantastic art. They included Madison, Wisconsin-based artists Marshall Glasier, Dudley Huppler and John Wilde; Karl Priebe of Milwaukee and Gertrude Abercrombie of Chicago. Their art combined macabre humor, mystery and irony which was in direct and pointed contradiction to the American Regionalism then in vogue.

In postwar Chicago, the art movement Chicago Imagism produced many fantastic and grotesque paintings, which were little noted because they did not conform to New York abstract art fashions of the time. Major imagists include Roger Brown, Gladys Nilsson, Jim Nutt, Ed Paschke, and Karl Wirsum.

In Japan, a painter who is drawing an Fantastic illusion painting is not necessarily confirmed as a “fantasy painter”. One of the reasons seems to be that it is difficult to limit the genres suggested by “fantasy paintings”. In other words, because the style that can be called an illusion painting in the Japanese art world can be widely confirmed not only in traditional concrete paintings such as foreign paintings and Japanese paintings but also in contemporary art, the essence of the art as a whole is fantasy through history Because it has taken over “fantasy painting” is ambiguous as a term of contemporary art in Japan. However in Japan the direction called fantasy painting, which has been conscious since around the 1960s, is an international, today classic printmaking that is lost on an international scale, Tempera’s technique and traditional religious art cultivate It greatly contributes to regenerating and practicing spiritual expressive power in a modern form.

The original fantastic artwork was limited to paintings and illustrations. But since the 1970s, it has expanded to include photographs. Fantastic Art Featuring Fantasy, Science Fiction, fantasy, and semiotics, visualization, supernatural concepts Gothic The art of miracles is derived from the genre of iconic Victorian art, covering similar topics including theology, occultism and mysticism, or folk legends and myths. Intrinsic value (Nature of spirit and spirit).