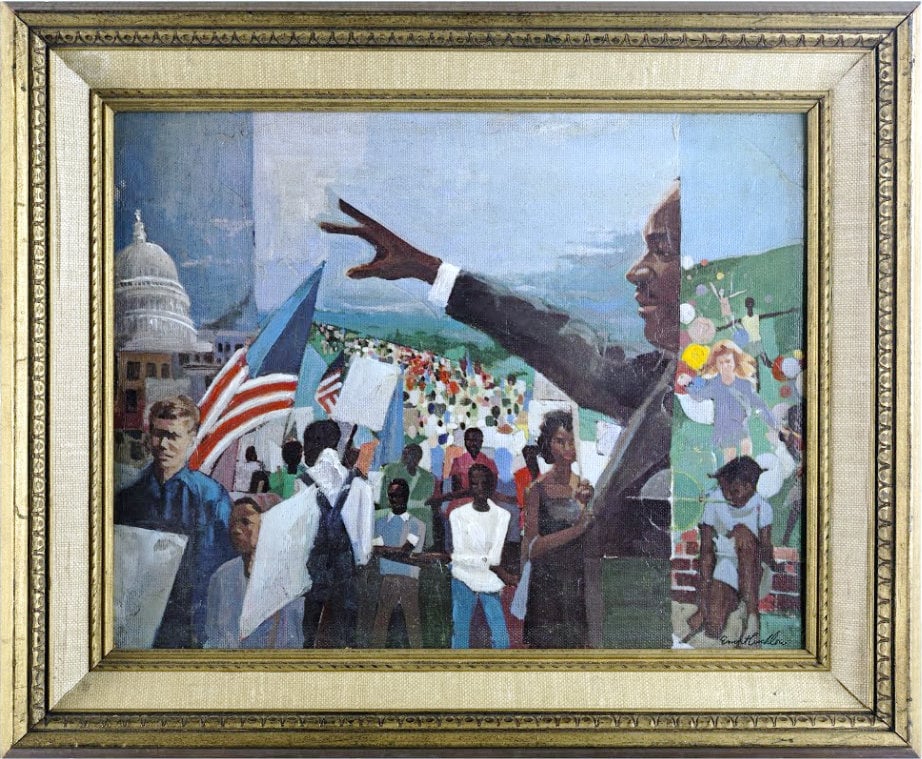 Crichlow was born in Brooklyn, New York, in 1914 to Caribbean immigrants. He studied art at the School of Commercial Illustrating and Advertising Art in New York and New York University. Crichlow started work as an artist in a studio sponsored by Works Progress Administration’s Federal Art Project. Augusta Savage was an early patron of his work, as was the case for many of the artists of the Harlem Renaissance.

His first exhibition was in 1938 in the Harlem Community Center in Harlem, New York. One of his best known works, the lithograph Lovers III shows a young black woman being harassed in her bedroom by a member of the Ku Klux Klan. Crichlow’s work was exhibited in the 1939 New York World’s Fair and in the Library of Congress the following year.

Over the next few decades, his work was regularly shown in leading US art galleries especially in the northeast although he held two exhibitions in Atlanta University in the 1940s. By the end of his career, his work had been honored by President Carter. His 1967 painting White Fence showing a young white girl being separated by a fence from five black girls was the most notable from his later career along with a 25 panel mural at Boys and Girls High School in Brooklyn.

Crichlow was also well known as an illustrator for children’s literature providing art work for Two in a Team, Maria, Lift Every Voice and Magic Mirrors. He founded the Cinque Gallery in 1969 with Norman Lewis and Romare Bearden as well as teaching art at New York University and the Art Students League.

Works:
Martin Luther King DuSable Museum of African American History
Oil on canvas painting depicting three scenes in a triptych or collage style, all revolving around Martin Luther King, Jr.’s March on Washington. The center scene shows King in left profile view with his right hand outstretched before a crowd of people, some carrying signs and American flags. At left, the Capitol building appears before a blue sky, with people in front carrying signs. At right, several black and white children can be seen running and playing on a green hilly landscape with colorful balloons. Between the center and right-hand scenes, there appears to be a circle containing crosshairs trained at King’s chest.

Suburban Woman Harvey B. Gantt Center for African-American Arts+Culture
Upper torso portrait of a woman looking down and to her left, her hand to her mouth. Tripartite background of yellow, white and blue/gray.

Dr. Jane Wright DuSable Museum of African American History
Acrylic painting on paper depicting Dr. Jane Wright, a pioneering African American cancer researcher and surgeon. She is visible from the chest up, looking slightly to the left and smiling. She has short black hair and wears a pink shirt and white lab coat. In the background, two elderly women face a young woman with black hair and a white lab coat who appears to be holding a stethoscope.

Boy in a Green Field Harvey B. Gantt Center for African-American Arts+Culture
Young boy in an orange shirt and beige shorts squatting down in a field of grass, his right hand in his lap and left hand resting on the grass.

The Balcony Harvey B. Gantt Center for African-American Arts+Culture
Scene showing the head and shoulders of a woman wearing a blue head wrap, on a white balcony overlooking an urbanscape with two pedestrians.

Woman in Yellow Dress Harvey B. Gantt Center for African-American Arts+Culture
Upper torso portrait of a woman facing the viewer’s left with an abstracted patchwork background.

Woman in a Blue Coat Harvey B. Gantt Center for African-American Arts+Culture
Upper body portrait of a woman wearing a blue coat and yellow scarf with her arms crossed and facing to her left. The letters “xra” appear above her head.

Girl with Flowers Harvey B. Gantt Center for African-American Arts+Culture
A three-quarter figure of a young girl in a yellow dress holding a basket of flowers and looking up, standing in a flower garden.

Lady in White DuSable Museum of African American History
Painting of a black woman wearing a white long-sleeved dress, white hat, and sash with text that reads, “CHRIST, TODAY AND…” She stands with her arms at her sides. Next to her, a young black boy wearing a blue and white striped t-shirt is looking toward her. He is holding his right index finger to his mouth and looks puzzled. In the background, in front of a red brick building, are two black men wearing white shirts, one standing and one sitting. Past them, another figure is standing in front of a window looking out.