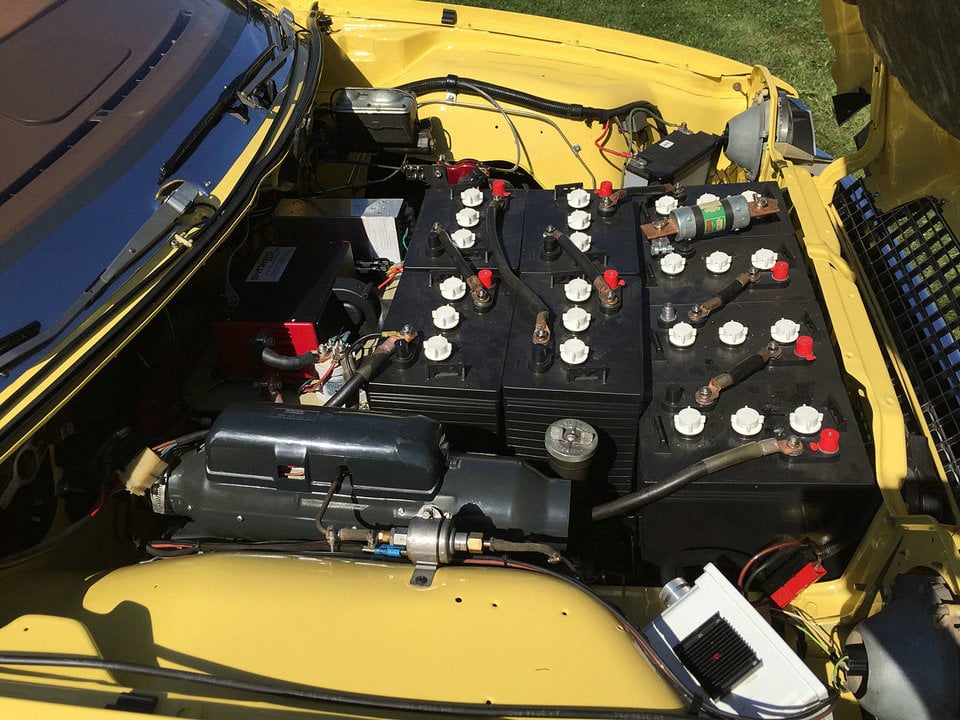 Electric-vehicle batteries differ from starting, lighting, and ignition (SLI) batteries because they are designed to give power over sustained periods of time. Deep-cycle batteries are used instead of SLI batteries for these applications. Traction batteries must be designed with a high ampere-hour capacity. Batteries for electric vehicles are characterized by their relatively high power-to-weight ratio, specific energy and energy density; smaller, lighter batteries reduce the weight of the vehicle and improve its performance. Compared to liquid fuels, most current battery technologies have much lower specific energy, and this often impacts the maximal all-electric range of the vehicles. However, metal-air batteries have high specific energy because the cathode is provided by the surrounding oxygen in the air. Rechargeable batteries used in electric vehicles include lead–acid (“flooded”, deep-cycle, and VRLA), NiCd, nickel–metal hydride, lithium-ion, Li-ion polymer, and, less commonly, zinc–air and molten-salt batteries. The amount of electricity (i.e. electric charge) stored in batteries is measured in ampere hours or in coulombs, with the total energy often measured in watt hours.

The battery makes up a substantial cost of BEVs, which unlike for fossil-fueled cars, profoundly manifests itself as a price of range. As of 2018, the few electric cars with over 500 km of range such as the Tesla Model S are firmly in the luxury segment. Since the late 1990s, advances in battery technology have been driven by demands for portable electronics, like laptop computers and mobile phones. The BEV marketplace has reaped the benefits of these advances both in performance, energy density. The batteries can be discharged and recharged each day. Perhaps most notable, battery costs have plummeted, and the cost of electric-vehicle batteries has been reduced by more than 35% from 2008 to 2014.

The predicted market for automobile traction batteries is over $37 billion in 2020.

In terms of operating costs, the price of electricity to run an EV is a small fraction of the cost of fuel for equivalent internal combustion engines, reflecting higher energy efficiency. The cost of replacing the batteries dominates the operating costs.

Lead-acid
Flooded lead-acid batteries are the cheapest and in past most common traction batteries available. There are two main types of lead-acid batteries: automobile engine starter batteries, and deep cycle batteries. Automobile alternators are designed to provide starter batteries high charge rates for fast charges, while deep cycle batteries used for electric vehicles like forklifts or golf carts, and as the auxiliary house batteries in RV’s, require different multi-stage charging. No lead acid battery should be discharged below 50% of its capacity, as it shortens the battery’s life. Flooded batteries require inspection of electrolyte level and occasional replacement of water which gases away during the normal charging cycle.

Traditionally, most electric vehicles have used lead-acid batteries due to their mature technology, high availability, and low cost (exception: some early EVs, such as the Detroit Electric, used a nickel–iron battery.) Like all batteries, these have an environmental impact through their construction, use, disposal or recycling. On the upside, vehicle battery recycling rates top 95% in the United States. Deep-cycle lead batteries are expensive and have a shorter life than the vehicle itself, typically needing replacement every 3 years.

Lead-acid batteries in EV applications end up being a significant (25–50%) portion of the final vehicle mass. Like all batteries, they have significantly lower specific energy than petroleum fuels—in this case, 30–40 Wh/kg.While the difference isn’t as extreme as it first appears due to the lighter drive-train in an EV, even the best batteries tend to lead to higher masses when applied to vehicles with a normal range. The efficiency (70–75%) and storage capacity of the current generation of common deep cycle lead acid batteries decreases with lower temperatures, and diverting power to run a heating coil reduces efficiency and range by up to 40%. Recent advances in battery efficiency, capacity, materials, safety, toxicity and durability are likely to allow these superior characteristics to be applied in car-sized EVs.

Charging and operation of batteries typically results in the emission of hydrogen, oxygen and sulfur, which are naturally occurring and normally harmless if properly vented. Early Citicar owners discovered that, if not vented properly, unpleasant sulfur smells would leak into the cabin immediately after charging.

Lead-acid batteries powered such early-modern EVs as the original versions of the EV1 and the RAV4 EV.

Nickel metal hydride
Nickel-metal hydride batteries are now considered a relatively mature technology. While less efficient (60–70%) in charging and discharging than even lead-acid, they have a specific energy of 30–80 Wh/kg, far higher than lead-acid. When used properly, nickel-metal hydride batteries can have exceptionally long lives, as has been demonstrated in their use in hybrid cars and surviving NiMH RAV4 EVs that still operate well after 100,000 miles (160,000 km) and over a decade of service. Downsides include the poor efficiency, high self-discharge, very finicky charge cycles, and poor performance in cold weather.

GM Ovonic produced the NiMH battery used in the second generation EV-1, and Cobasys makes a nearly identical battery (ten 1.2 V 85 Ah NiMH cells in series in contrast with eleven cells for Ovonic battery). This worked very well in the EV-1. Patent encumbrance has limited the use of these batteries in recent years.