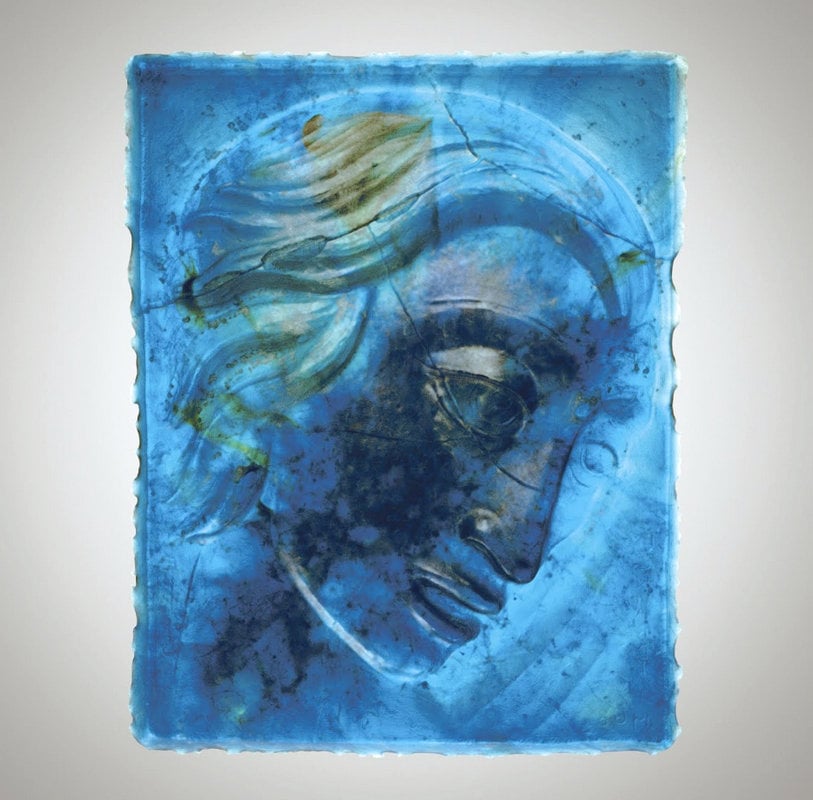 Edris Eckhardt (January 28, 1905 – April 27, 1998) was an American artist associated with the Cleveland School She is known for her work in Ceramic art and glass sculpture, her work with the Works Projects Administration’s (WPA) Federal Arts Project of Cleveland, and her teaching

Born in Cleveland, Ohio, Eckhardt attended the Cleveland School of Art (now Cleveland Institute of Art) from 1928 to 1932 on a scholarship, studying at the same time as ceramicist and industrial designer Viktor Schreckengost While still a student, she was employed as an artist and designer at the noted Cleveland ceramics firm Cowan Pottery After graduating, she established a ceramic studio, specializing in glaze chemistry Early in her career she changed her first name from Edith to the more androgynous Edris in order to counter bias against female artists

The WPA’s Federal Arts Project funded much of her artistic output during the 1930s She created a series of ceramic sculpture illustrating children’s literature for public libraries thanks to grants from the Public Works of Art Project In 1935, Eckhardt was appointed director of the Ceramics and Sculpture division of the WPA’s Federal Arts Project of Cleveland and served until 1942

During the 1930s, Eckhardt’s ceramics were exhibited widely She showed at the Cleveland Museum of Art in each of its annual May Show’s from 1933 to 1945, and in 1947, she showed her major piece “Painted Mask” in the May exhibit She also showed at the 1939 Golden Gate Exposition in San Francisco and in the 1939 New York World’s Fair

By 1934, her own work was gaining such respect that she was offered a faculty job at CSA; and the following year, she was asked to serve as regional supervisor of sculpture for the Federal Arts Project, a program of the Works Progress Administration (WPA) that paid local artists to create murals, sculptures and ceramics on American themes She held this position until the program ended in 1941

It was through a precursor program that had lasted less than a year (1933–34), the short-lived Public Works of Art Project (PWAP), however, that Eckhardt got an opportunity that would have an enormous impact on her career: creating sculpted figures from children’s literature for display in public libraries across the US Before long Marshall Field’s and Neiman Marcus department stores would be selling her creations But these were no kitsch figurines Art critic Douglas Max Utter, reviewing a 2006 retrospective of Eckhardt’s work at the Cleveland Artists Foundation at the Beck Center for the Arts, co-curated by Kisvardai and the Cleveland Museum of Art curator Henry Adams, finds “a sense of mystery” in them that is “captivating” Eckhardt’s huddled, highly detailed groupings of such legendary figures as Alice, the Mad Hatter, Mock Turtle, White Rabbit and the scowling Queen of Hearts—based on Sir John Tenniel’s original (now iconic) illustrations—seem “like fragments of a lost world,” says Utter, “toys in the attic of our culture”

After World War II, Eckhardt explored glass making—rediscovering an ancient Egyptian technique of fusing gold leaf between sheets of glass—and eventually bronze casting Her work in studio glass garnered her two John Simon Guggenheim Awards for Fine Arts (1956, 1959) and the Louis Comfort Tiffany Fellowship in 1956 While her early career was focused on ceramics, her 1971 Cleveland Arts Prize Special Citation for Distinguished Service to the Arts highlighted her pioneering role in the field of glass sculpture

Many of Eckhardt’s storybook sculptures and other pieces for which she is justly famed were made using a process known as paté de verre (paste of glass) in which the separate pieces of glass are first cut and carefully assembled (“laid up”), then placed in a kiln There, at lower temperatures than are used in glass blowing, the pieces take on the consistency of honey and fuse, after which the piece has to be slowly and very carefully cooled Developed in Mesopotamia in the second millennium BCE and perfected by the Greeks and Romans, this “warm glass” technique had been lost for centuries before European craftsmen rediscovered it in the late 19th century and refined in the early years of the 20th

At the time Eckhardt was creating these pieces, says New Bedford Glass Museum director Kirk J Nelson, only a few artists anywhere were using this complicated, disaster-prone technique The iridescent quality of pate de verre, which seems to glow with an internal fire, would soon lure many others

In the 1950s Eckhardt, after thousands of failed attempts, rediscovered a process that had eluded her fellow artists for 2,000 years: the Egyptian art of fusing gold leaf between sheets of glass to produce gold glass, which resulted in some of her most powerful work She was awarded two Guggenheim fellowships and a Louis Comfort Tiffany Foundation Fellowship and was invited to teach at the University of California at Berkeley In 1973, Dennis Barrie conducted an extensive interview with her for the Archives of American Art, which also houses Eckhardt’s papers (1927–1980) The Cleveland Museum of Art owns 12 of her pieces

Throughout her career, Eckhardt taught at the university level She began teaching ceramics at the Cleveland School of Art in 1932 serving on the faculty for the following 30 years She held teaching positions at Cleveland College from 1940 to 1956, Western Reserve University from 1947 to 1957, University of California, Berkeley from 1962 to 1963, and Notre Dame College from 1950 to 1970 Along with her formal teaching, Eckhardt educated the public on ceramics in articles for Ceramics Monthly starting in 1954