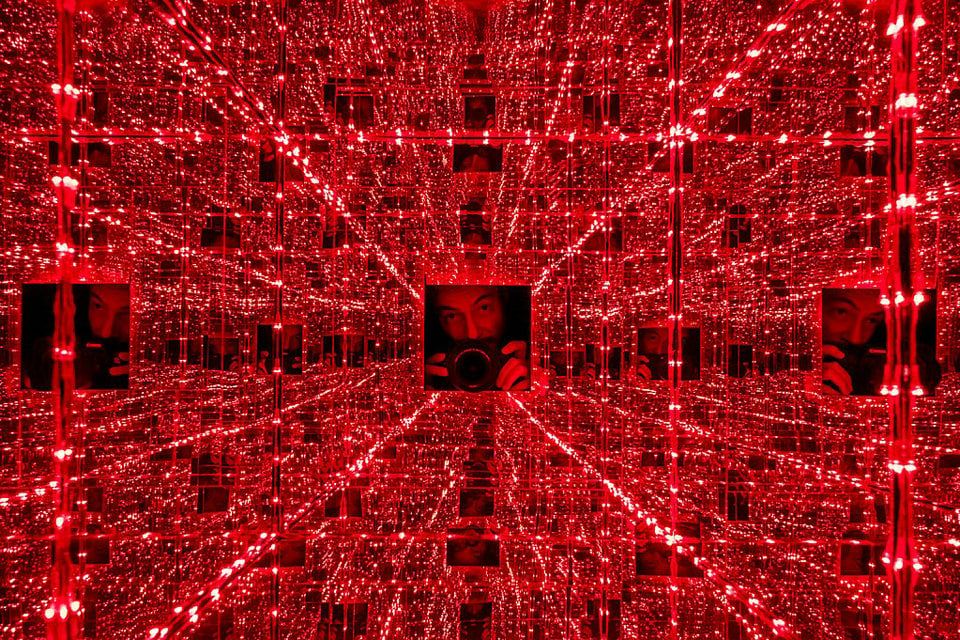 The Droste effect, known in art as an example of mise en abyme, is the effect of a picture recursively appearing within itself, in a place where a similar picture would realistically be expected to appear.

The effect is named for a Dutch brand of cocoa, with an image designed by Jan Misset in 1904. It has since been used in the packaging of a variety of products. The effect was anticipated in medieval works of art such as Giotto’s Stefaneschi Triptych of 1320.

Description
An image in which the Droste effect is present has a small image of itself, located where it should be if it were a real image. This small image also contains an even smaller version of itself, and so on. Technically there is no limit to the number of iterations, but in practice it continues as long as the resolution allows you to distinguish a change.

The wording “Droste effect” was coined in the late seventies of the twentieth century by the poet and journalist Nico Scheepmaker, who was inspired by the Dutch brand of cocoa Droste, on whose box there was the image of a nurse who was holding in his hand a tray with a cup and a box of the same brand; this advertisement was created by Jan Misset in 1904.

Origin
The origin of the name of this effect is in the packaging used by Droste, one of the leading Dutch food brands, which began using a recursive image printed on its cocoa powder containers. This image, with some variations over the years, shows a babysitter or nanny carrying a tray with a cup of hot chocolate next to a container of Droste cocoa. The recursive effect shown in the image, maintained for decades, became a popular notion, and it is said that at the end of the 1970s it was widely disseminated by the poet and columnist Nico Scheepmaker.

The Droste effect is not a recent idea. For example it was used by Giotto di Bondone in 1320 in his Stefaneschi Triptych. This polyptyal altarpiece portrays Cardinal Jacopo Caetani degli Stefaneschi in his central panel, and was offered on his behalf in the ancient basilica of St. Peter. This triptych is now in the Vatican Museums. There are also some examples of books from the Middle Ages that recursively repeat their own image, and stained glass windows in churches that show miniature copies of the same stained glass window. You can also see the collection of articlesMise-en-abîme medieval: the object represented within itself, for examples and opinions on how this effect was used symbolically.

Effect
The effect is named after the image on the tins and boxes of Droste cocoa powder, one of the main Dutch brands, which displayed a nurse carrying a serving tray with a cup of hot chocolate and a box with the same image, designed by Jan Misset. This image, introduced in 1904, and maintained for decades with slight variations from 1912 by artists including Adolphe Mouron, became a household notion. Reportedly, poet and columnist Nico Scheepmaker introduced wider usage of the term in the late 1970s.

In nature
Many animal and plant structures reproduce, at least to some extent, the recursion of the Droste effect. This is for example the case of certain shelled animals, such as ammonites or snails.

In medieval art
The Droste effect was anticipated by Giotto in 1320, in his Stefaneschi Triptych. The polyptych altarpiece portrays in its center panel Cardinal Giacomo Gaetani Stefaneschi offering the triptych itself to St. Peter. There are also several examples from medieval times of books featuring images containing the book itself or window panels in churches depicting miniature copies of the window panel itself.

In architecture
As such, the Droste effect cannot be reproduced endlessly in architecture. Nevertheless, structures have an appearance of recursive reproduction, if an element reproduces at regular intervals. This is the case in particular of the successive arches of a vaulted passage, or the turns of a spiral staircase.

In the graphic arts
The Droste effect has long been used in painting. In the Middle Ages, the stained glass windows, reliquaries, altarpieces, were sometimes decorated with images representing the main donor or the sponsor offering the work itself to the religious building that welcomed it.

But it is especially the xx th century that the Droste effect is massively used, both in painting and photography or even in literature, particularly in connection with the notion of infinity. Thus, Michel Leiris or Maurits Cornelis Escher are most known users of the Droste effect in their works.

M. C. Escher
The Dutch artist M. C. Escher made use of the Droste effect in his 1956 lithograph Print Gallery, which depicts a gallery containing a print which depicts the gallery, each time both reduced and rotated, but with a void at the centre of the image. The work has attracted the attention of mathematicians including Bart de Smit and Hendrik Lenstra. They devised a method of filling in the artwork’s central void in an additional application of the Droste effect by successively rotating and shrinking an image of the artwork.

In modern usage
The Droste effect was used in the packaging of Land O’Lakes butter, which features a Native American woman holding a package of butter with a picture of herself. Morton Salt similarly makes use of the effect. The cover of the 1969 vinyl album Ummagumma by Pink Floyd shows the band members sitting in various places, with a picture on the wall showing the same scene, but the order of the band members rotated. The logo of The Laughing Cow cheese spread brand pictures a cow with earrings. On closer inspection, these are seen to be images of the circular cheese spread package, each bearing the image of the laughing cow. The Droste effect is a theme in Russell Hoban’s children’s novel, The Mouse and His Child, appearing in the form of a label on a can of “Bonzo Dog Food” which depicts itself.

Examples
An example of a Droste effect can be easily created by positioning two mirrors in front of each other; this occurred spontaneously in the compartments of the old railway carriages, equipped with opposite mirrors. Another more technological method is to shoot a TV screen that shows what is being filmed.

In the verse of Stefaneschi Triptych of Giotto (around 1320) you can see the altarpiece itself offered to St. Peter by the client Giacomo Gaetani Stefaneschi.

Another commercial brand is that of the French cheeses La vache qui rit, with a cow adorned with earrings that recursively reproduce the box of the cheeses themselves; the graphics were created by the illustrator Benjamin Rabier (1926). An old French and also cheese brand was Le berruyer.
An Italian advertisement was that of the Fiat Lubricants – created by Marcello Nizzoli in 1928 – in which a little man had cans of oil instead of hands and feet, which recursively showed the whole image.

The recursive design was used by the artist Maurits Cornelis Escher; as in the Gallery of prints (1956), where starting from the gaze of a visitor portrayed to observe the landscape of a painting hanging in the gallery, the gaze continues passing imperceptibly from the painting to the real landscape, finding itself, after a circular path, observing the visitor’s neck through the glass of the gallery itself, in a potentially infinite succession.

On December 28, 1958 the popular magazine La Domenica del Corriere published on the cover a drawing by the illustrator Walter Molino, which represents a family intent on leafing through a volume whose cover recursively depicts the scene itself.

The self-portrait of the painter and illustrator American Norman Rockwell (1960).

The cover of the number 7 of the first series of Walt Disney’s I Classici periodical, entitled I gialini di Paperino (1961), portrays Donald Duck and Qui, Quo, Qua in evident tension while reading a detective: the volume they are reading is precisely Donald’s yellows.

The cover of the Pink Floyd album Ummagumma (1969), in which the group’s photograph is repeated, with some modifications, in the frame of a painting that is part of the photograph itself.

The video for Bohemian Rhapsody of Queen (1975).

The scene from the Melle Brooks space movie (1987) in which the Spaceball One crew, to find out where the protagonists have fled, watches the video of the film wrapping forward, reaching the same scene that is taking place until then the videotape passes to the images of the place where they were directed.

The cover of a version of the PC game taken from the television quiz L’eredità (2003), in which Amadeus appears, holding in his hand and indicating the safekeeping of the game, with the same cover.

The video that sees the Linux – Android pairing, streaming the display of an Android device in turn connected as client to a computer with Linux Operating System which acts as a remote server: the Android client and the remote Linux server they blend into an infinite Droste effect, like the spiral that sees the visitor and observer of the Gallery of Prints by Maurits Cornelis Escher as protagonist.