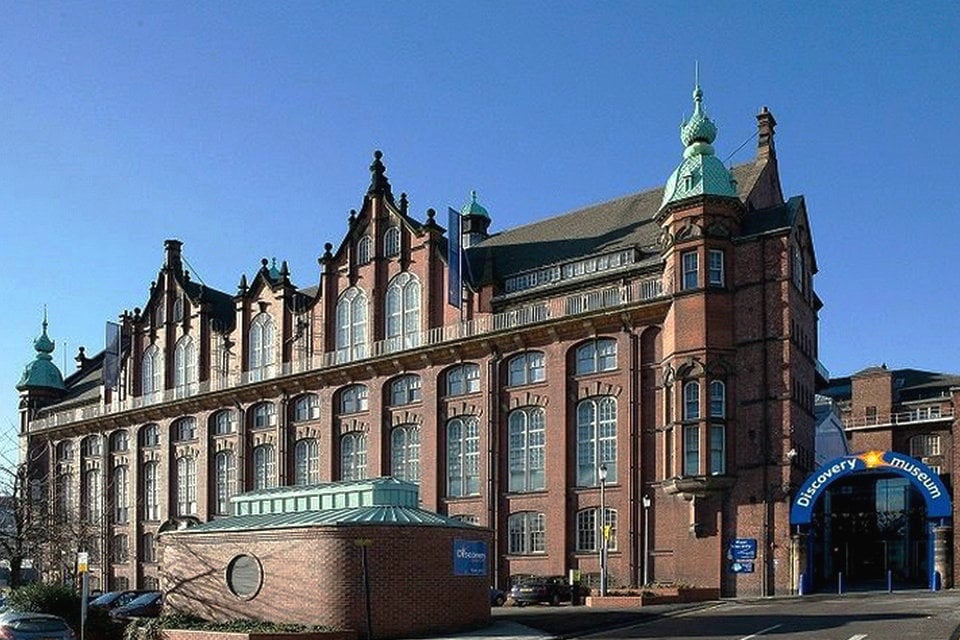 Discovery Museum is a science museum and local history museum situated in Blandford Square in Newcastle upon Tyne, England. It displays many exhibits of local history, including Turbinia, the 34 metre long ship built by Charles Algernon Parsons to test the advantages of using the steam turbine to power ships. It also features examples of Joseph Swan’s early lightbulbs which were invented on Tyneside.

Discovery Museum is housed in the old Co-operative Wholesale Society building, Blandford House. 15th/19th The King’s Royal Hussars and the Northumberland Hussars, exploring the human side of 200 years of life in the army. It is a “hands-on” museum designed to interest both children and adults.

Discovery Museum is all about Tyneside, its history and its people, from the region’s shipbuilding heritage to inventions which changed the world.

Discovery Museum started life in Exhibition Park, Newcastle in 1934 as the Municipal Museum of Science and Industry, the first science museum outside of London. It was housed in the temporary pavilion that was built for the 1929 North East Coast Exhibition.

History
Discovery Museum started life in 1934 as the Municipal Museum of Science and Industry. The collections were housed in a temporary pavilion built for the 1929 North East Coast Exhibition in Exhibition Park, Newcastle. This was the first UK science museum outside London.

The collections and displays grew for another forty years, until the temporary pavilion could no longer meet the Museum’s needs. In 1978, the Museum was re-located to Blandford House, the former Co-operative Wholesale Society Headquarters for the Northern Region. Designed by Oliver, Leeson and Wood, this magnificent 1899 building had been the distribution centre for over 100 Co-op stores across the region, and contained extensive warehouse space and offices.

In 1993 the Museum was re-launched as Discovery Museum. Ongoing refurbishment has brought many new displays in recent years. This includes the spectacular transfer of Turbinia, in 1994, from her old home in Exhibition Park through the streets of Newcastle to the new entrance hall at Discovery.

In 2004 the £13 million redevelopment of the Museum was complete and the following year the venue attracted 450,000 visitors.

Collections:
Discovery Museum is home to one of the finest collections of scientific and technical material outside of London as well as housing significant collections on maritime history, social history and regimental history.

For more than two centuries the developments in science, technology and industry pioneered or established in Tyne and Wear had a powerful influence worldwide.

Turbinia takes pride of place in the museum, designed in 1894 by Tyneside engineer Charles Parsons, she was the world’s first ship to be powered by steam turbines and until 1899, was the fastest ship in the world reaching speeds of up to 34.5 knots.

Discovery also displays a replica of Swan’s first lightbulb, a number of models of Stephenson’s steam engines, ship models from the famous Tyne shipyards of Swan Hunter and a prototype of BAE Systems Challenger 2 tank which is displayed outside the museum.

On the ground floor you’ll find the temporary exhibition space as well as Newcastle Story which takes you on a journey through the city from the Roman times to the early millennium. The ground floor is also home to Tyne & Wear Archives and the museum gift shop.

The first floor delves further into Tyneside’s industrial and maritime past with Working Lives, Tyneside Challenge and Story of the Tyne. Our under sevens water play area Play Tyne can also be found on the first floor.

The second floor is home to Turbinia Cafe where you can enjoy a refreshing drink and snack overlooking Turbinia and Story of the Tyne gallery. You can also see some of the steam engines of the collection in action as well as exploring the world of science in the interactive Science Maze. Our PLAY + INVENT space is a place for children and their grown ups to make, invent and get creative, including both drop-in making and family friendly events.

Also on the second floor is Destination Tyneside, the UK’s only permanent dedicated gallery telling the story of migration of those who have made Tyneside their home.

Venturing into the rafters of the museum, you’ll find the majestic Great Hall on the fourth floor. This vast space with its art-deco ceiling attracts many people to hold events such as conferences, parties and weddings here.