Azerbaijan opened its pavilion at the 56th Venice Biennale – International Art Exhibition with two exhibitions. Azerbaijan is taking part in the Biennale for the fifth time. The national pavilion is located in one of the most crowded places in the city – the Palace Lezze XIV century in Piazza Santo Stefano. The exhibition, organized by the Azerbaijan pavilion is called “Breaking Borders.”

Beyond the Line acts as a counterpoint to the international exhibition Vital Life, Azerbaijan’s second pavilion at the 56th International Art Exhibition – la Biennale di Venezia.The show “Breaking the Borders” allows to rediscover works by artists who lived and worked in Azerbaijan in the 60s, 70s and 80s , but who were forgotten. 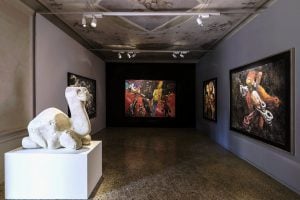 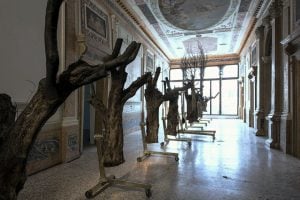 Art keenly reacts to modernity, recreating the visual image of an epoch as a whole. Each landmark in the development of states and nations remains in the memory of mankind because of art.

We live in a time when art is becoming increasingly globalized. However, in the mid 20th century, the world of art was quite different. For one-sixth of the globe, art was divided into two mutually exclusive concepts – Soviet and Western. Although the achievements of western European culture – including the development of 20 th -century modernism – had become part of the west’s cultural canon, they were absent from the world of Soviet art.

For the first time see some of the great works created during this period. Art is timeless, and not in step with current trends, it is connected with works created with sincerity and deep thoughts. Azerbaijani artists, even though, others have tried to stop them, for many years, created such a product. Hopefully, getting acquainted with the exhibition, hear the voices of these artists, and agree that their art passed the test of time.

Art can speak about environmental circumstances directly or allegorically. The Azerbaijani avant-garde artists of the mid-twentieth century, working in strictly controlled conditions, often resorted to the use of allegory. By the 1960s, artists who displayed ‘rebellious’ personal attitudes that deviated from Communist ideology were no longer arrested, executed, or banished. They were punished differently. Their works were ignored, they could not hold exhibitions, and they were not permitted to travel abroad. They were thus refused the guardianship of state structures regulating official art.

The significance of the exhibition “Breaking Borders”, which presents works by Azerbaijani artists. The works exhibited in the pavilion reflect the spirit of the artists who have remained in the shadow of the Soviet regime. The pavilion brings us to an important moment in the history of Azerbaijan, and we seem to hear the artists’ voices, which at the time were either silenced or not recognized.

Azerbaijan proudly presents their works in Beyond the Line, which showcases the Soviet period artwork of the non-conformist artists Javad Mirjavadov, Tofik Javadov, Ashraf Murad, Rasim Babayev, and sculptor Fazil Najafov. The exhibition also includes the film ‘Stepping over the Horizon’ directed by Shamil Najafzada as well as an installation by Huseyn Hagverdi, whose career suffered under Soviet rule, but whose creativity nevertheless blossomed. These displays by hitherto obscure artists represents the victory of their indestructible spirit. Today, they speak about their epoch from the heart, symbolizing ‘the ecology of the human soul.’

When Azerbaijan first got its independence and when women were granted the right to vote, women have been active in the country’s institutions on all levels. The first Muslim East Opera and Ballet was created then in Azerbaijan. After that, the Soviet period added a new layer to the diverse and exciting culture of the country.

Azerbaijan Venice Biennale 2015
Venice Biennale is an event eagerly awaited by all workers and art lovers. It is considered the most prestigious and representative exhibition and action in the modern art world.

de Pury de Pury and Emin Mammadov curate the first exhibition, Beyond the Line, which spotlights the resilient spirit of artists whose lives and work were overshadowed by the repressive Soviet regime of the mid 20th century.

Susie Allen, Laura Culpan, and Dea Vanagan of Artwise curate the second exhibition, Vita Vitale, in which Azerbaijan brings together international contemporary artists whose work expresses concerns about our planet’s destiny. When viewed jointly, the two exhibitions reveal a country contemplating its past and its future, as well as the impact of 20th-century social and industrial transformations upon its own soil, and that of the world. Beyond the Line revisits a crucial moment within Azerbaijan’s history, and returns their voices to the nation’s mid-century artists, who were silenced or ignored under Soviet rule.

With Vita Vitale, Azerbaijan looks forward, and beyond its geographic borders, providing a platform for international artists and scientists who grapple with the ecological challenges we face globally today and tomorrow as a result of our technological advances, and the consequent rise in consumerism.

Both exhibitions showcase the gravity of the artist’s voice on the social and environmental issues that define not only the past, present, and future of Azerbaijan, but of the planet.