Belvedere. Landscapes and visions of Gallarate Art Museum’s collection is an exhibition coming from the museum’s collection, enriched and rethought for this particular occasion: the return of the works at MA*GA, after the necessary exile at the Triennale in Milan, at the Villa Reale di Monza and after the first restorations.

The exhibition tells, through a selection of Italian contemporary artists, landscapes, environments, visions and the views that have always distinguished artists ‘ research on physical and imaginary places that man crosses. For this reason it was decided to build a unit but not characterized by three nuclei which lead, as in a journey to the different interpretations of the idea of environment and nature: 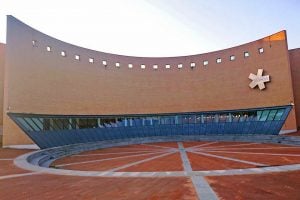 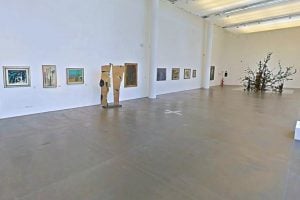 Spaces: paintings, sculptures and installations make themselves projections of a thought linked to the relationships between the physical space and the reality in which we live and we move.

Stories: photos, drawings, postcards, books and videos that report a journey, a personal experience, post-sherds of a peripheral sight of the world.

Visions: paintings and monumental sculptures present landscapes as places of imagination, of representation, of the myth.

The museum’s collection is given back to the public with a new set of rules and enriched by new artworks lended by private or artists to prove the constant activity of research and the increasing of the public collection.

For the first time some artworks are visible at MAGA coming from the collection of Walter Fontana, as the sculptures off Pietro Consagra, Giacomo Manzù, Luciano Minguzzi and as the important canvas of Ennio Morlotti, Mattia Moreni e Franco Rognoni, or the famous artworks of Lucio Fontana, Alberto Burri, Sebastian Matta, Tancredi and Wlfredo Lam of the foundation of Alessandro Passarè. In addiction the artworks of Sergio Breviario and Chiara Camoni, acquired from AMACI (Associazione Musei Arte Contemporanea Italiani), after a stop over at MUSMA of Matera, now they are lended to MA*GA for the valorization of the younger generation of artists and the circulation of their artworks around the more important italian museums.

Lastly, the large plant installation Dafne by Alik Cavaliere is presented, which is returned to its glory, remained for many months trapped in environments ravaged by fire. The work was restored by Alik Cavaliere and the restoration center “Zanolini – Ravenna, Milan.”

Gallarate Art Museum
The Gallarate Art Museum (also known with the acronym of MAGA), already known since 1966 as the Civic Gallery of Modern Art of Gallarate, has been managed since 2009 by the Silvio Zanella Gallery of Modern and Contemporary Art Foundation which sees as founding members the Ministry for Cultural Heritage and Activities and the Municipality of Gallarate, and as institutional partners for the Lombardy Region and Varese Province. The Maga, in March 2010, thus opened, forty years after its birth, in an architectural complex of 5,000 square meters and with a collection that now has 5,500 works.

The Museum was founded in 1966, with a core collection of works acquired as a result of the city’s art prize, the Premio Nazionale Arti Visive, established in 1950.

In December 2009 the City of Gallarate established the Foundation of the Civica Galleria d’Arte Moderna di Gallarate to administer the Civica Galleria d’Arte Moderna (Municipal Gallery of Modern Art) of Gallarate, on the basis of an agreement signed by the Culture Minister and the Mayor of Gallarate. The founding partners were the Ministry of Heritage and Culture and the City of Gallarate, with the Lombardy Region and the Province of Varese as institutional partners. The mission of the Foundation is to manage the activities of the museum: the conservation and enhancement of the works in the collection, organization of exhibitions and cultural events and creative activities and training for schools and adult audiences. Following this institutional development, the Museum, historically known as the Galleria Civica d’ArteModerna di Gallarate, on March 19, 2010, acquired the name of the MAGA Museo Arte Gallarate and inaugurates the new museum in Via De Magri, specially designed to showcase its collections and cultural activities.