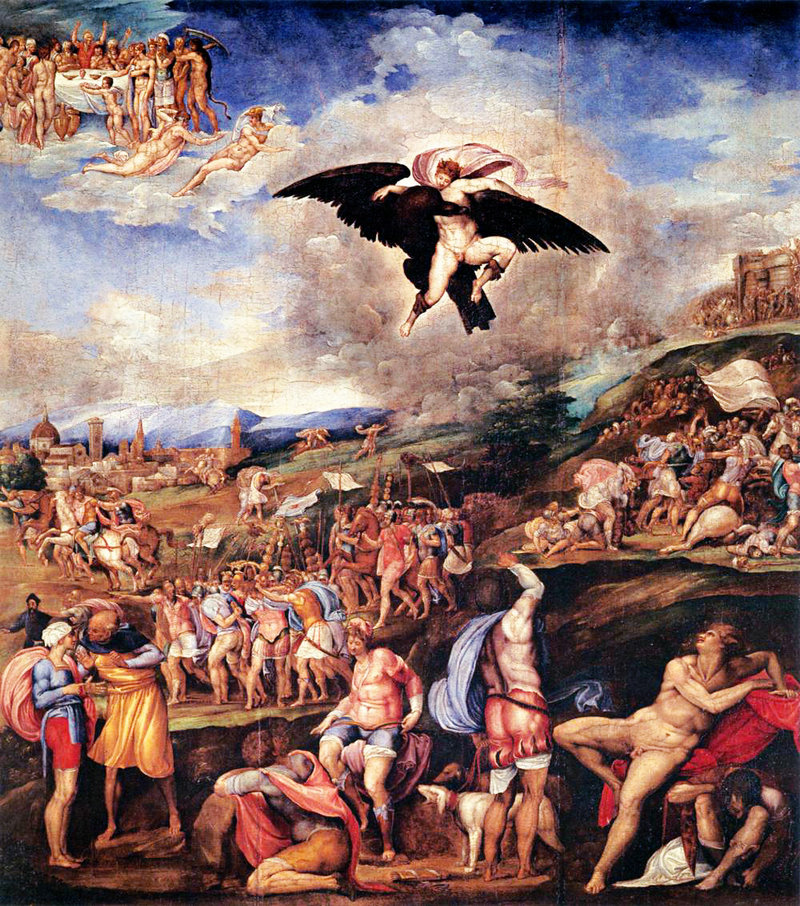 Baptist Franco, known as Samolei (Venice, 1510 – 1561), was an Italian Mannerist painter and printmaker in etching, He is exponent of Roman mannerism. He is active in Rome Urbino, and Venice in the mid 16th century. He is also known as il Semolei or just Battista Franco. His painting, in the Mannerist style, was heavily influenced to Michelangelo; but his drawings and etchings have far more verve and originality.

Son of Iacopo, according to Giorgio Vasari – who devoted one of his life – at twenty years moved to Rome to study contemporaries, particularly Michelangelo. Initially he worked on drawing, but already in 1535-36 he realized the Emperor Augusto and the Siberian Tiberina (private Venetian collection) that would be his first pictorial work coming to us.

On commission of the family Contarini degli Scrigni is given to him part of the frescoes of Vigna Contarena in Este.

He enrolled at the National Academy of St. Luke in 1535. But after seeing Michelangelo’s Universal Judgment in the Sistine Chapel he did not want to do anything else to draw for a while. Noteworthy by Raffaello da Monte Lupo, it was recommended to Antonio da Sangallo il Giovane to use it in the installation of the apparatus in honor of the entrance of Carlo V of Asburgo both in Rome and in Florence, in 1536, where the young artist distinguished himself above all For the skill and extreme care of the details of his work in which the design always prevailed over the color, a gap that continues to reproach Vasari in Le Vite.

Even in Florence, Baptist Franco devoted himself to copying the statues of Michelangelo who were in the New Sacristy of St. Lawrence. His obsession of copying, not only by Michelangelo, according to Vasari precluded him from elaborating a personal style lacking freshness and originality of invention his works although appreciated for the extra ability of drawing and details.

In Florence he met Vasari and made great friendship with Bartolomeo Ammannati, where he lived with Genga da Urbino, creating a profitable artistic association. At the service of Cosimo I de ‘Medici painted many works that were appreciated. Following Ridolfo del Ghirlandaio painted Stories of St. Joseph in the cloister of the church of Our Lady of the Vertighe in Val di Chiana.

Returning to Rome where Michelangelo’s Universal Judgment had been inaugurated in the meantime, he wanted to copy it meticulously in its entirety. In Rome he went to the service of Cardinal Francesco Corner for whom he painted grotesque a loggia of his new palace, which will later be demolished to make room for the Bernini colonnade. Competition with Francesco Salviati painted a fresco by a Saint John the Baptist who was imprisoned by Herod, which did not always compare to the usual motive: the extreme care of the drawn details that removed spontaneity and color to the work as a whole.

After this failure, Battista Franco, thanks to the good offices of Bartolomeo Genga, entered the service of the Duke of Urbino who was not satisfied with the work commissioned, namely the fresco of the vault of the church and chapel annexed to the Ducal Palace. Recognizing him more talent in the drawing that in the paint the Duke Guidobaldo used Franco to make designs for the production of the enamel terracotta pots of his furnaces, of which he sent a whole service, “belief,” to Cardinal Farnese, brother of his wife Vittoria , And even a “double belief” to Emperor Charles V in Spain.

On the occasion of the wedding of Duke Guidobaldo with Vittoria Farnese, Battista Franco assisted Genga in the installation of the apparatus, after which he went to Rome with the intention of publishing a collection of drawings that he was making for this purpose to illustrate his antiquities. Bookstore opera, beautifully defined by Vasari, of which there is no trace.

While working hard in Rome, his earnings were not such as to support him in that expensive city for which he resolved to return to Venice where it was documented there already in 1554. In his hometown, home to Venetian and Titian colorism, he was Instead he was very appreciated and he had many important commissions such as grotesque decoration inside Palazzo Ducale in the “wall” of the “golden ladder” just made by Sansovino.

In 1561 he was decorating with stuccoes and frescoes the first chapel to the left, entering the Church of San Francesco della Vigna for commission of the Patriarch Grimani, when suddenly he died of death, perhaps because of the intoxication of the substances used. The works in this chapel were completed by Federico Zuccari, while Venice was the new genius of painting not only in Venetia: the Tintoretto.