The Arenas of Arles are a Roman amphitheater built in 90 AD, by the orders of Tiberius Caesar Augustus, the amphitheatre was capable of seating over 20,000 spectators, and was built to provide entertainment in the form of chariot races and bloody hand-to-hand battles. The amphitheater of Arles is the most important monument of the ancient Roman colony, some two millennia after its construction. Its architecture is entirely designed in relation to its vocation as a place for great shows, welcoming a large audience. Today, it draws large crowds for bullfighting during the Feria d’Arles as well as plays and concerts in summer.

Description
Roman engineers built the amphitheater of Arles on the hill of Hauture. To do this, they must demolish the Augustan enclosure erected a century earlier.

The arenas take up the classic characteristics of this type of construction and are inspired by the just completed Colosseum in Rome: an evacuation system by numerous access corridors, a central elliptical stage surrounded by steps, arcades, here on two levels, all for a total length of 136 meters, a dimension larger than that of the arenas of Nîmes built soon after but nevertheless better preserved (the attic of crowning of the arenas of Arles has unfortunately disappeared). This building could accommodate 25,000 spectators.

In Arles, as throughout the West, the amphitheater is from the late 1st century to the middle of the 3th century, the most obvious sign of Romanization.

History
This temple of the game where the gladiators clash remains in function until the end of the Roman Empire. In 255, the emperor Gallus organized games there in celebration of the victories won by his armies in Gaul. Early in the iv th century, Constantine is represented great hunting and fighting on the occasion of the birth of his eldest son. Later, Majorien gave several shows there. Finally, we know from Procopius, in 539, Childebert, King of Paris, having gone to the south of Gaul, wants us to renew the games of the antiques in his presence. 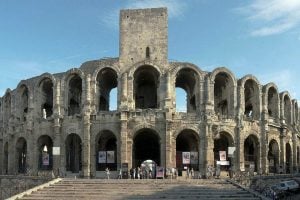 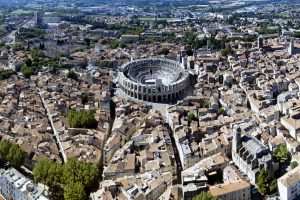 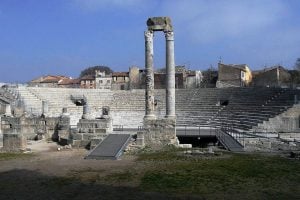 Historical documents show that it is still used under the episcopate of Césaire and after the passage of the city under Frankish domination, until around 550.

At the end of the vi th century, the arenas are adapting to the new reality of the time: the return of insecurity. So here they are transformed into a country house, a sort of urban fortress which over time has acquired four towers and into which more than 200 dwellings and two chapels are integrated. The doctor and geographer Jérome Münzer visiting the city of Arles in 1495 writes:

Today, poor people live in this theater, having their huts in the hangers and on the arena. and François I er visiting the city in 1516, is surprised and regrets to find such a building in such a sad state.

The residential function is perpetuated in time before the expropriation begun in the late eighteenth th century will finally succeed in 1825 under the leadership of the then mayor, the Baron Chartrouse. The arenas found in 1830, during an inaugural feast on the occasion of the celebration of the capture of Algiers, the initial festive and dramatic side for which they were built, as a kind of perpetuation of Roman mores, with the bullfighting show which earned him his current current name of Arena. But this is only the December 30, 1840that the Archaeological Commission demolishes the last houses attached to the amphitheater.

This Roman amphitheater was classified as a historic monument in 1840 on the initiative of the writer Prosper Mériméeand in 1981, listed as World Heritage by UNESCO.

The arenas also hosted the game show Intervilles in 1998 (against Martigues ) and in 2005 (against Digne-les-Bains ), and the final between Pont-Saint-Esprit and Saint-Quentin.

The building
The building measures 136 m (446 ft) in length and 109 m (358 ft) wide, and features 120 arches. It has an oval arena surrounded by terraces, arcades on two levels (60 in all), bleachers, a system of galleries, drainage system in many corridors of access and staircases for a quick exit from the crowd. It was obviously inspired by the Colosseum in Rome (in 72-80), being built slightly later (in 90). The amphitheatre was not expected to receive 25,000 spectators, the architect was therefore forced to reduce the size and replace the dual system of galleries outside the Colosseum by a single annular gallery. This difference is explained by the conformation of the land. This “temple” of the games housed gladiators and hunting scenes for more than four centuries.

After Rome
With the fall of the Western Empire in the 5th century, the amphitheatre became a shelter for the population and was transformed into a fortress with four towers (the southern tower is not restored). The structure encircled more than 200 houses, becoming a real town, with its public square built in the centre of the arena and two chapels, one in the centre of the building, and another one at the base of the west tower.

This new residential role continued until the late 18th century, and in 1825 through the initiative of the writer Prosper Mérimée, the change to national historical monument began. In 1826, expropriation began of the houses built within the building, which ended by 1830 when the first event was organized in the arena – a race of the bulls to celebrate the taking of Algiers.

Conservation
Arles Amphitheatre is listed as a UNESCO World Heritage Site, together with other Roman buildings of the city, as part of the Arles, Roman and Romanesque Monuments group.

Restoration works
The amphitheater of Arles is composed of sixty spans and rises on two levels, the attic which crowned them having disappeared. On each level, a circular gallery gave access to the bleachers by stairs alternating with vertical passages.

Only a real desire on the part of the state services and the majority of the local population mobilized by all of the municipalities that followed one another could create a dynamic of restoration. The establishment of an intervention plan providing for the consolidation and setting out of water, then the realization of a reference span under the project management of Jean-Pierre Dufoix, Chief Architect and General Inspector of Historic Monuments, are the starting point.

A double concern is at the origin of the work on span 45. The first is to inventory the problems of consolidation and sealing posed by a span, to carry out a diagnosis, to test the remedies and to determine the costs intervention. These analyzes and methods will make it possible to rationalize interventions on the other spans. No systematic approach had hitherto been made from the foundations to the coronation. The second is to provide as precise an archaeological reference as possible, with the assistance of the Institute for Research on Ancient Architecture (IRAA), closely associated with this work and with the reflections of restorers.

This involves carrying out a complete study of archaeological data, based on rigorous methods: surveyor’s surveys, photogrammetric surveys, stone-by-stone surveys by the IRAA and control of reference profiles. These investigations were supplemented by restitution proposals by Myriam Fincker, Architect attached to the IRAA; they determine a strict framework for consolidation work. The span 45 will be the memory of the building and the conservatory of the profiles which it is necessary today to go to read on several parts of the building and which will be gathered on only one span.

The Arles-Objectif Patrimoine brochure produced, on the initiative of the Regional Conservation of Historic Monuments, by the Center for Study and Research on Architecture and Urban Planning, presented a sample of ten major restoration projects in progress. The main thing was this technical and scientific mobilization which knew how to combine the efforts of the National Center for Scientific Research and the Regional Conservations of Historic Monuments and Archeology. The cleavages of the services are often resolved through a common project creating a culture of the group.

The arenas are now part, thanks to the Raphael program of the European Communities supported by the Commission and the European Foundation for Heritage Trades, in the MINOTEC project on the image of ancient places of shows. It gave rise to the Charter of Verona supplementing the Declaration of Segesta and being accompanied by methodological guidelines on this theme. In addition, an Agency for Ancient Heritage was founded injanuary 2001by the State and the Provence-Alpes-Côte d’Azur Region. This makes it possible to approach the policy of restoration of monuments within the framework of an integrated heritage approach proposing actions to enhance the monuments as well as raising public awareness. Beyond the restoration of monuments operation, the agency intervenes on the dissemination of knowledge of these monumental complexes and offers cultural and artistic operations, training of professionals, raising public awareness and enhancing monuments.

In 2013, the restoration campaign led by Alain-Charles Perrot, Chief Architect of Historic Monuments, ended, and the Arenas were returned to the public. This operation is part of the Provence-Alpes-Côte d’Azur Antique Heritage Plan for the restoration and enhancement of large ancient monumental complexes. Nearly 25 million euros were spent on this restoration, which lasted ten years and which was, during this period, one of the largest heritage projects in France.

Nowadays
Today, the Roman amphitheater is the most visited monument in the city, thus bringing the image of Arles around the world.

It is also the place which hosts many shows, bullfights, Camargue race (including the gold roundel ), theater and musical shows, a way of combining the preservation of the ancient heritage and the cultural life of today.

Summer sees a homecoming for the amphitheater: every Tuesday and Thursday, a team of professionals brings Roman customs and traditions to life, presenting gladiatorial fights to the public.

The arenas and art
The arenas have inspired many painters, such as Vincent van Gogh or Picasso, who will find in Arles what his native Spain could no longer offer him: the culture of bullfighting games.

They were also photographed, from the 1850s by Édouard Baldus as part of the Heliographic Mission and by Dominique Roman around 1860.

In the film Happy, which like Ulysses, several scenes take place in the arenas of Arles.

Roman monuments and Romans of Arles
The Roman and Romanesque monuments of Arles, in France, are subject to inclusion on the list of World Heritage of UNESCO since 1981.

The site is on the list of World Heritage at the 5 th session of the World Heritage Committee in 1981 under the name of “Arles, Roman and Romanesque Monuments”. A “cultural” type of property, it meets criteria (ii) (evidence of a considerable exchange of influences during a given period or in a specific cultural area) and (iv) (eminent example ‘architectural ensemble illustrating significant periods of human history) of the organization. The name of the site was changed to “Arles, monuments romains et romans” in 2006.

Unesco justifies the inscription as follows: “Arles offers an interesting example of the adaptation of an ancient city to the civilization of medieval Europe. It has some impressive Roman monuments, the oldest – arenas, ancient theater, cryptoporticos – date back to the i st century BC. AD. She knew the iv th century a second golden age, Constantine’s thermal baths testify and the necropolis of Alyscamps. In the xi th and xii th centuries, Arles once again became one of most beautiful cities in the Mediterranean. Inside the walls, Saint-Trophime with its cloister is one of the major monuments of Provençal Romanesque art”.

The inscription protects an area of 65 ha of downtown Arles, located between the Rhône to the northwest, the Georges-Clemenceau and des Lices boulevards to the west and south, and the Émile-Combes boulevard to the to the east and to the north, to which must be added the area of the Alyscamps necropolis which forms a protrusion in the southeast, from the summer garden to rue Georges-Pomerat, along the Craponne canal.