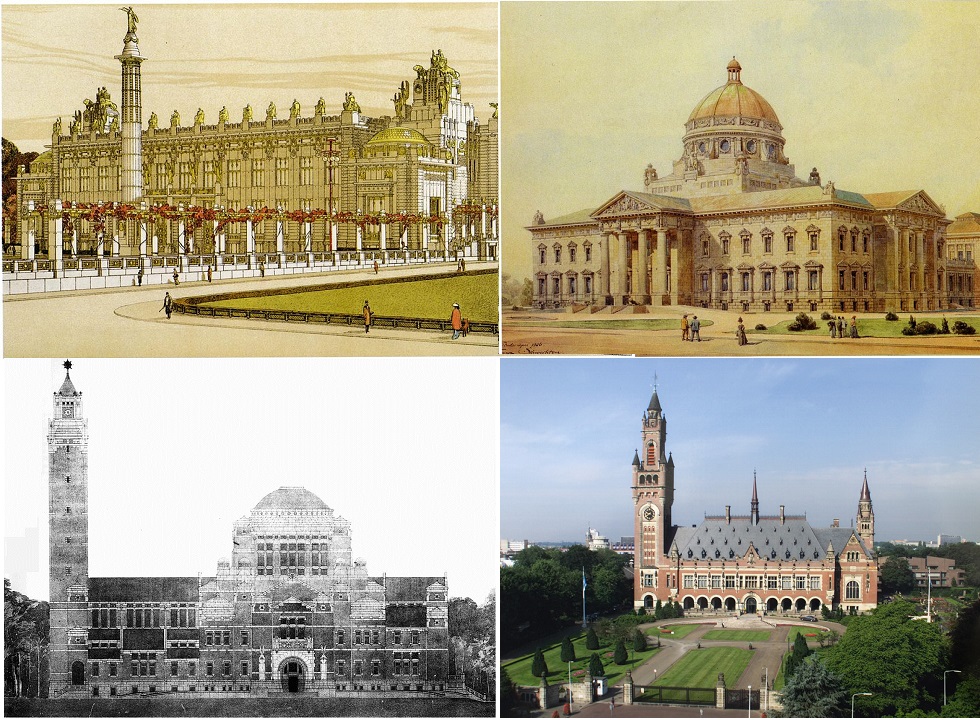 An architectural design competition is a type of competition in which an organization that intends on constructing a new building invites architects to submit design proposals. The winning design is usually chosen by an independent panel of design professionals and stakeholders (such as government and local representatives). This procedure is often used to generate new ideas for building design, to stimulate public debate, generate publicity for the project, and allow emerging designers the opportunity to gain exposure. Architecture competitions are often used to award commissions for public buildings: in some countries rules for tendering public building contracts stipulate some form of mandatory open architectural competition.

Winning first prize in a competition is not a guarantee that the project will be constructed. The commissioning body often has the right to veto the winning design, and both requirements and finances may change, thwarting the original intention. The 2002 World Trade Center site design competition is an example of a highly publicized competition where only the basic elements of the winning design by Daniel Libeskind appeared in the finished project.

History
Architecture competitions have a more than 2,500-year-old history. The Acropolis in Athens was a result of an architectural competition in 448 B.C., as were several cathedrals in the Middle Ages. During the Renaissance, many projects initiated by the church have been decided through design competition. Examples are the Spanish Stairs in Rome or in 1419, a competition was held to design the dome of the Florence Cathedral, which was won by Filippo Brunelleschi. Open competitions were held in the late 18th century in several countries including the United States, Great Britain, Ireland, France and Sweden.

In 19th century England and Ireland there have been over 2,500 competitions in five decades, with 362 in London alone. The Institute of British Architects drafted a first set of rules in 1839, and a set of formal regulations in 1872. The German Regulations were introduced in 1867. In the same period in the Netherlands, an association for the advancement of architecture (Maatschappij tot Bevordering van de Bouwkunst), started organising conceptual competitions with the aim of stimulating architects’ creativity.

Open competitions (international, national or regional) or limited, selected, non-open competitions, depending on who is allowed to participate.
Project competitions or ideas competitions: depending on the intention of building the project or generating new ideas.
Single-stage or two-stage competitions: depending on the scale and complexity of the competition.
Anonymous or cooperative procedures: anonymity supports greater objectivity during the evaluation and award-granting deliberations. In cooperative procedures, the authors are invited to make in-person presentations to the jury in order to explain their design strategies and allow individual discussion.
Student design competitions.
Rules and guidelines
The rules of each competition are defined by the organiser; however, these often follow the guidelines provided by the International Union of Architects, respectively the relevant national or regional architecture organisation. Competition guidelines define roles, responsibilities, processes, and procedures within a competition and provide guidance on possible competition types, eligibility criteria, jury composition, participation conditions, payments, prizes, publication of results and other aspects.

In France and Germany design competitions are compulsory for all public buildings exceeding a certain cost.

characteristics
These competitions are usually organized by the client, the promoter. This can be either a public institution or a company or a private person. The competition documents announce the conditions of the competition, define the task to be worked on and describe objectives for the processing in the form of quantitative parameters (eg the space requirement via the spatial program) or qualitative ideas.

Process and principles
The competition is organized by competition managers (eg a competent authority or a contracted company), which are usually architects, just like the competitors. The Competitions Managers (Competence Coordinators according to RPW) must have the same qualification as the competitors. They take over the coordinating role of the architect in this phase and are responsible among other things for the compilation of all contents of the declaration as well as the preliminary examination of the submitted drafts of the participating architects. In addition, they control and document the entire process – advice on the selection of judges, preparation and documentation of all events, cost management, preparation of the exhibition etc. For this particular profile has developed since the 1990s, a niche within the planner who provides these services specializes.

The evaluation of the submitted designs as well as the selection of the winners will be done by the jury. It is composed of judges and vice-judges, who have to perform their duties in a personal and independent way, according to professional criteria. Specialist and substantive judges have equal voting rights. At the beginning of the first session, the jury selects a chairperson and a deputy from the panel of judges. The Specialist Judges have the same qualifications as the Competitors, the Substitute Judges represent the interests of the Award and, where appropriate, the municipality or other stakeholders.

The basic idea of most competitions is the award of a planning contract (realization competition). To this end, the order promise is set down in the claim. Due to this promise, the “competition sum” distributed in the form of awards and recognitions may be lower than the actual performance provided by all participants. The competition amount in Germany corresponds approximately to the fee for the preliminary planning (performance phase 2 according to HOAI). The draft documents submitted in the course of the competition become the property of the promoter, but further use of the designs is only possible within the scope of a further commission. The copyrights always remain with the author of the work when realized.

The principles of the architectural competition are

the equal treatment of all participants
the clear task
a reasonable price-performance ratio
the assessment of the work by a competent jury
the anonymity of the competition entries
a commitment to commission one of the winners
securing the copyright of the participants
Sustainability in architectural competitions
Sustainability in comprehensive understanding is the core idea of any quality planning. Criteria in this sense are the innovation and portability of the planning, its socio-ethical sustainability, the consideration of the careful use of resources and the environment, the economic efficiency as well as the aesthetic-cultural sustainability in the respective context.

Sustainability in architectural competitions
Sustainability in comprehensive understanding is the core idea of any quality planning. Criteria in this sense are the innovation and portability of the planning, its socio-ethical sustainability, the consideration of the careful use of resources and the environment, the economic efficiency as well as the aesthetic-cultural sustainability in the respective context.

An early attempt at a factual evaluation is the system published in 2004 for assessing the sustainability of architectural projects in the field of the environment – SNARC of the Swiss Association of Engineers and Architects SIA. Based on 10 criteria, the ecological quality of buildings can be estimated comparatively in the concept phase. For the first time, the Sustainability-oriented Architectural Competitions Guide – published in 2011 – LeNA derives 20 preliminary sustainability criteria from existing sustainability assessment systems. It is based on the process steps of building construction competitions and presents the possibilities of application in a sustainable competition process. The guideline is based on the experience of a competition held in the HafenCity Hamburg in 2009 and was commissioned by the city of Hamburg. A research project of the Federal Ministry of Transport, Building and Urban Development (BMVBS) in the autumn of 2013, the previous experience in the national assessment system sustainable building for federal buildings – BNB were transferred. For this purpose, a system was developed how sustainability aspects should be taken into account in competition proceedings of the federal government.

However, the cost of these systems is not insignificant and therefore not without controversy, especially since essential parameters of the sustainability of a planning are not defined by the draft in the competition, but either already decided in advance (choice of the land, etc.) or only after the competition ( Choice of materials etc.).

competition forms
Eligibility, open and restricted competitions
By defining the eligibility, the promoter determines the circle of persons admitted to the procedure – usually z. B. Architects with the appropriate professional qualifications. For open competitions, all persons who fulfill the requirements of the eligibility and who have no participation obstacles can participate. Because they are employees of the promoter or part of the jury. Non-Open (RPW, WOA), Limited (RAW) or Limited (GRW) competitions will be preceded by an entry contest prior to the actual competition. Prior to the dispatch of the claim documents, after the publication, a selection procedure for the determination of a clearly defined number of participants takes place. The organization of the competition allows for some flexibility within the limits of public procurement law, from the direct naming of participants to the definition of access and selection criteria on the basis of office data and references, to lottery.

Realization and idea competitions
Competitions are usually awarded as “realization competition” or in Switzerland “project competition”, which means that an optimal solution is sought for a specific project. The essential element of the “contract” between the promoter and the participant is the so-called “order promise”, which means that the promoter promises to commission one of the winners with the further planning of the project, as and when the project is realized. As a rule, it is promised to assign at least the service phases 2-5 according to the fee schedule for architects and engineers (HOAI).

Because idea competitions were often misinterpreted as an option to hold competitions without a promise to make a contract, even if there was an intention to realize them, the differentiation between realization and idea competitions was abandoned in the RAW. The promise of the order is to be regarded as the principle of every competition. The RPW, on the other hand, continues to formulate the option of a contest without a pledge, but as an exception. Since the amendment 2013, the term “ideas competition” has been used again for this purpose.

Cooperative competitions
An essential principle of regulated competition is anonymity. This means that, even if the participants in a restricted competition have their own names, the entries will be submitted and assessed anonymously in order to ensure a concentration on the content independently of the persons. In exceptional cases competitions can be co-opted. In these cases, one or more presentation colloquia will be held to discuss with the participants common approaches before further processing. Anonymity can not be maintained then. Cooperative procedures are only possible with a small number of participants and make themselves useful if the task or specific conditions can only be specified in the course of the procedure.