A substantial nucleus of the works of the Museum collections comes from the Archiepiscopal Gallery, from which, on the initiative of Cardinal Martini, many paintings from the ancient collections of the Milanese archbishops have come and which reflect their different cultural orientations. Among these, part of the Monti collection, of the Visconti, of the Pozzobonelli, and the complete Erba Odescalchi collection. The choices of Cardinal Cesare Monti (1593-1650), in line with the culture of San Carlo Borromeo and with the spirit of the Counter-Reformation, are oriented towards the school of the sixteenth century in the Veneto, towards the early seventeenth century in Lombardy and the school of Leonardo and Emilian. Among the works at the Diocesan Museum, the Fall of San Paolo del Cerano, the Fight of Jacob and the angel stand out, a masterpiece by Morazzone and San Giuseppe col Bambino by Guido Reni.

The collection orientation of Cardinal Giuseppe Pozzobonelli (1696-1783) is rather different, whose collection constitutes one of the greatest expressions of the Arcadia culture that spread in Milan in the eighteenth century: the works in fact depict arcadian subjects, bucolic and marine landscapes, perspectives with figures from the Roman, Venetian, Lombard and, to a lesser extent, Tuscan, Neapolitan and Flemish areas, datable between the end of the seventeenth and the seventies of the following century. The painters in the collection include Francesco Zuccarelli, Cavalier Tempesta, Paolo Anesi and Giovanni Paolo Panini. 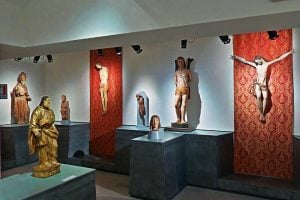 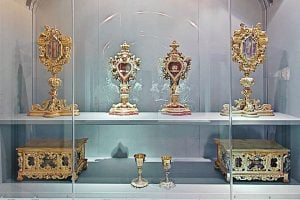 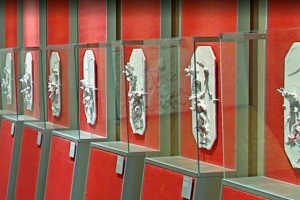 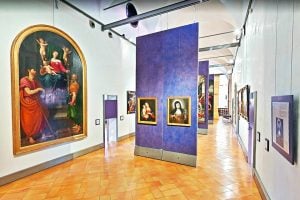 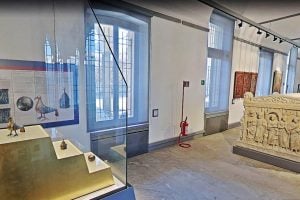 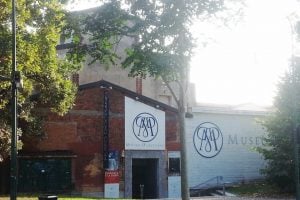 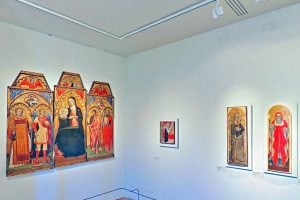 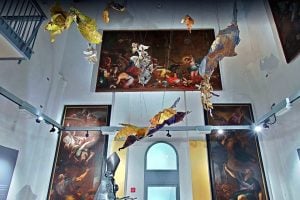 Highlights
The section displays the works collected by Cardinal Giuseppe Pozzobonelli, archbishop of Milan ( 1743 – 1783 ). They all depict arcadian subjects, landscapes, perspectives with figures, from the Roman, Venetian, Lombard, Tuscan, Neapolitan and Flemish areas, dating from the late 16th to the 17th century.

A lovable collection, immersed in the taste of travelers of the eighteenth-century Grand Tour : the paintings of painters such as Pannini, Marco Ricci, Amorosi, are directly inspired by real places or referring to seascapes or hills.

Pier Francesco Mazzuchelli known as Morazzone Morazzone, Varese, 1573-1625 / 1626 Jacob’s fight with the angel Oil on canvas, 178.5 x 140 cm
Among the most significant of the artist’s entire production, the painting, belonging to the Monti collection, appears expertly built on an interweaving of oblique and parallel lines, with a game of dynamic contrast between the two figures of the angel and the old Jacob, twisted and entangled in a grueling struggle. The forced and artificial pose is highlighted by the extreme lengthening of the limbs, and of the still late-man muscular arms. The luministic register has a particular almost silvery quality and cold tones, which exacerbate until they become sharp in the most exposed parts. The result is a masterpiece of complex figurative culture, in which late-style artifacts and memories of Gaudenzio Ferrari’s painting intertwine, in particular in the soft and curly hair of the angel.

Guido Reni Bologna 1575-1642 Saint Joseph with the Child Oil on canvas, 124.8 x 91 cm
The painting, remembered as a work by ” Guidoreno ” already in the Inventory of the Monti collection of 1638 and in the Donationof 1650, is also referred to the Bolognese artist by the Milanese guides of the eighteenth century. The noble serenity of the figure and the Raphaelesque amplitude of the volumes, the choice of a clear and luminous chromatism suggest a dating to the mature years of Reni’s activity, around 1625-30. Despite the rather significant dimensions, the painting is certainly to be considered a “room painting”, intended for private devotion. The iconography can be traced back to the Counter-Reformation climate, which promotes the devotion of the saints and in particular the cult of Saint Joseph. On the occasion of the 1988 restoration, the tiny scene emerged with the Flight into Egypt in the background, hidden by the lateral folding of the canvas, on the right.

Francesco Zuccarelli Pitigliano, Grosseto 1702-Florence 1788 Rural landscape with peasant woman on horseback Oil on canvas, 49.5 x 66.7 cm
The work, belonging to the Pozzobonelli collection, refers to Francesco Zuccarelli, an artist who dedicates himself entirely to landscape painting. In this work, nature is the absolute protagonist and is characterized by a serene and calm atmosphere, by the prevalence of a clear and luminous palette and by the use of a pictorial technique that uses hatching in the description of the trees, while it is more soft in the representation of the sky and the background. The spectator’s gaze is slowly pushed to the bottom of the canvas, through hills, streams and trees with minute leaves up to the bright sky, crossed by clouds with soothing pastel colors. All these elements lead us to date the painting at the end of the fifth decade of the 18th century, in correspondence with the painter’s Lombard residence.

Giovanni Paolo Panini Piacenza 1691 – Rome 1765 A Sibyl, the Pyramid of Caius Cestius and the Borghese vase Oil on canvas, 48, 8 x 64.2 cm
Belonging to the Pozzobonelli collection, the painting depicts the Borghese Vase and the Pyramid of Caius Cestius, motif dominant of the composition and repeatedly taken by the artist from Piacenza, albeit with slight variations. The work is characterized by a lively color scheme and a safe and decisive process, which reflect Panini’s intention to renew the usual repertoire themes; according to recent criticism the work is attributable to the early 1940s, in correspondence with the Roman residence of Cardinal Pozzobonelli.

Francesco Fabbrica (attributed) Active in Milan from 1710-40 Sant’Ambrogio Oil on canvas, 109 x 76 cm
The painting is part of the series of forty-one portraits of the holy bishops of Milan, from San Barnaba apostle to San Carlo Borromeo, donated by the cardinal Erba Odescalchi at the Archbishopric in 1737. Critics in the past had already noticed the substantial stylistic homogeneity of the paintings of the cycle, reported by recent studies in the hand of the Milanese painter Francesco Fabbrica and datable within the third decade of the eighteenth century. Ambrogio, here in a blessing attitude, is inspired by the banner of Giuseppe Meda. Below, there are two little angels who offer him the pastoral care and the stirrup, symbol of his struggle against the Aryan heresy.

Giovanni Battista Crespi known as the Cerano Romagnano Sesia, Novara 1573-Milan 1632 San Carlo in gloria Oil on panel, 49.4 x 26.1 cm
Entered in 1689 in the Archiepiscopal Gallery by legate of Cardinal Visconti, the small table is one of the masterpieces of the Cerano derives from the large altarpiece now preserved in the church of San Gottardo in Corte in Milan (around 1610), the oldest representation of the theme of San Carlo in gloria. This tablet is one of the ideologically most impressive images of the painter, The image of San Carlo, elevated to celestial glory and now otherworldly and ultra-historical, on the one hand is a tribute to the artist for the rigor and penance of the saint, on the other it reveals the originality of the painter in detaching himself from the most baroque rhetoric of Catholic triumphalism. Of very high quality and of great executive refinement, the painting can be placed chronologically not far from the autumn of 1610.

The Diocesan Museum is located in the setting of the cloisters of Sant”Eustorgio, integral part of one of the most antique monumental complexes of Milan, built from the joined units of the basilica and the Dominican convent, a thriving centre in the course of the centuries in an important area for the history of Milanese Christianity.

The permanent collection is constituted of over seven hundred works of art that span the period going from the 4th to the 21st century. Within the Archbishop”s Painting Gallery are the collections from the Milanese archbishops (part of the Monti, Visconti, Riccardi collection and the complete collection of Erba Odescalchi). In addition to the paintings coming from the churches of the Diocese, the Museum houses an important group of works of liturgical furnishing. Completing the collection is the section dedicated to Gold Leaf panel paintings (works primarily from the sphere of Tuscany of the 14th and 15th centuries, collected by Prof. Alberto Crespi and donated to the Museum), and sculptures and paintings coming from the collection of Caterina Marcenaro. Lastly, around a first nucleus of sculpted works by Lucio Fontana, there are many works from the 20th and 21st centuries, which declare a growing interest that the Museum has for contemporary works of art.