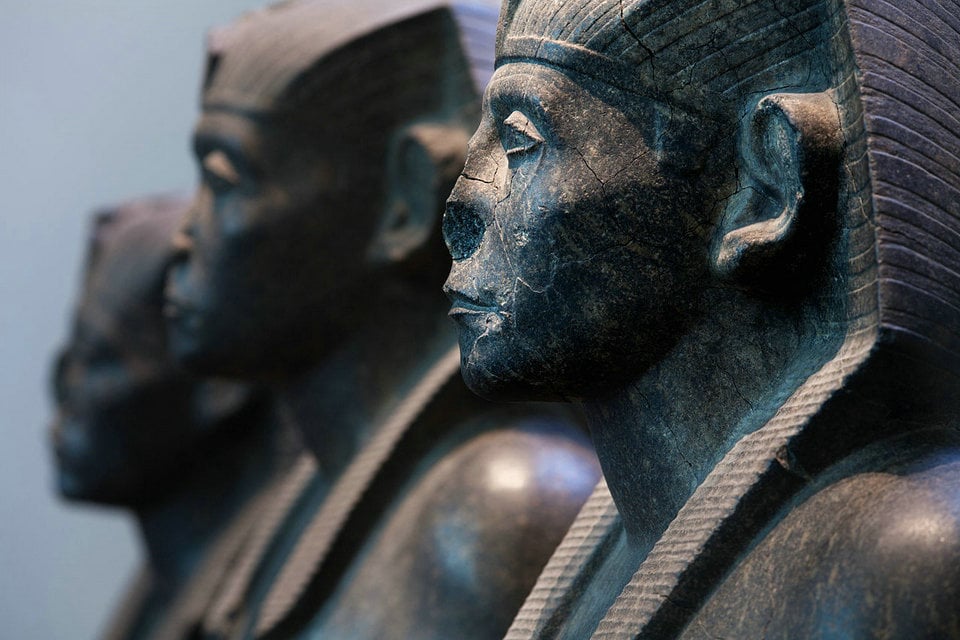 The British Museum houses the world’s largest and most comprehensive collection of Egyptian antiquities (with over 100,000 pieces) outside the Egyptian Museum in Cairo. A collection of immense importance for its range and quality, it includes objects of all periods from virtually every site of importance in Egypt and the Sudan. Together, they illustrate every aspect of the cultures of the Nile Valley (including Nubia), from the Predynastic Neolithic period (c. 10,000 BC) through to the Coptic (Christian) times (12th century AD), a time-span over 11,000 years.

Egyptian antiquities have formed part of the British Museum collection ever since its foundation in 1753 after receiving 160 Egyptian objects from Sir Hans Sloane. After the defeat of the French forces under Napoleon at the Battle of the Nile in 1801, the Egyptian antiquities collected were confiscated by the British army and presented to the British Museum in 1803. These works, which included the famed Rosetta Stone, were the first important group of large sculptures to be acquired by the museum. Thereafter, the UK appointed Henry Salt as consul in Egypt who amassed a huge collection of antiquities, some of which were assembled and transported with great ingenuity by the famous Italian explorer Giovanni Belzoni. Most of the antiquities Salt collected were purchased by the British Museum and the Musée du Louvre.

By 1866 the collection consisted of some 10,000 objects. Antiquities from excavations started to come to the museum in the latter part of the 19th century as a result of the work of the Egypt Exploration Fund under the efforts of E.A. Wallis Budge. Over the years more than 11,000 objects came from this source, including pieces from Amarna, Bubastis and Deir el-Bahari. Other organisations and individuals also excavated and donated objects to the British Museum, including Flinders Petrie’s Egypt Research Account and the British School of Archaeology in Egypt, as well as the Oxford University Expedition to Kawa and Faras in Sudan.

Active support by the museum for excavations in Egypt continued to result in important acquisitions throughout the 20th century until changes in antiquities laws in Egypt led to the suspension of policies allowing finds to be exported, although divisions still continue in Sudan. The British Museum conducted its own excavations in Egypt where it received divisions of finds, including Asyut (1907), Mostagedda and Matmar (1920s), Ashmunein (1980s) and sites in Sudan such as Soba, Kawa and the Northern Dongola Reach (1990s). The size of the Egyptian collections now stand at over 110,000 objects.

In autumn 2001 the eight million objects forming the museum’s permanent collection were further expanded by the addition of six million objects from the Wendorf Collection of Egyptian and Sudanese Prehistory. These were donated by Professor Fred Wendorf of Southern Methodist University in Texas, and comprise the entire collection of artefacts and environmental remains from his excavations at Prehistoric sites in the Sahara Desert between 1963 and 1997. Other fieldwork collections have recently come from Dietrich and Rosemarie Klemm (University of Munich) and William Adams (University of Kentucky).

The seven permanent Egyptian galleries at the British Museum, which include its largest exhibition space (Room 4, for monumental sculpture), can display only 4% of its Egyptian holdings. The second-floor galleries have a selection of the museum’s collection of 140 mummies and coffins, the largest outside Cairo. A high proportion of the collection comes from tombs or contexts associated with the cult of the dead, and it is these pieces, in particular the mummies, that remain among the most eagerly sought-after exhibits by visitors to the museum.

Though not a part of Ancient Egypt but rather part of the wider modern Egypt project, in May 2018, the British Museum added the boots of Egyptian footballer, Mo Salah. The boots were added to the Egypt collection because of his historical achievement of scoring 32 goals in a 38 game season.

Key highlights of the collections include:

Late Period (664–332 BC)
Saite Sarcophagus of Satsobek, the vizier (prime minister) of the northern part of Egypt in the reign of Psammetichus I, (664–610 BC)
Bronze figure of Isis and Horus, North Saqqara, Egypt, (600 BC)
Obelisks and sarcophagus of Pharaoh Nectanebo II, (360–343 BC)

Ptolemaic dynasty (305–30 BC)
The famous Rosetta Stone, trilingual stela that unlocked the ancient Egyptian civilisation, (196 BC)
Giant sculpture of a scarab beetle, (32–30 BC)
Mummy of Hornedjitef (inner coffin), Thebes, (3rd century BC)

Roman Period (30 BC-641 AD)
The Meriotic Hamadab Stela from the Kingdom of Kush found near the ancient site of Meroë in Sudan, 24 BC
Lid of the coffin of Soter and Cleopatra from Qurna, Thebes, (early 2nd century AD)
Mummy of a youth with a portrait of the deceased, Hawara, (100–200 AD)

The Department of Ancient Egypt and Sudan at the British Museum houses an extensive collection of objects which illustrate the cultures of the Nile Valley, from the Neolithic period (about 10,000 BC) until the present day. The Department also houses an important archive relating to Egyptology and Nubian Studies, and one of the leading research libraries in this subject area.

Alongside the permanent display, the collection, archive and library is made accessible through touring exhibitions, loans, by appointment and through Collection Online. The Department’s research staff develop exhibitions on aspects of the cultures of Egypt and Sudan, while also leading research on particular themes related to the collection, resulting in publications for both scholarly and other audiences. Fieldwork in Egypt and Sudan, often in collaboration with UK and international institutions, forms part of this research. The Department also provides training programmes and research scholarships for scholars, curators and archaeologists from Egypt and Sudan.

Further objects from Egypt and Sudan are housed in the Departments of Greece and Rome, Middle East, Africa Oceania & the Americas, Coins & Medals, Britain, Europe & Prehistory, and Asia.

Large-scale sculpture was an important feature of the great temples and tombs of ancient Egypt and was believed to be imbued with powerful spiritual qualities.

Sculptures on display in Room 4 include stylised depictions of kings, deities and symbolic objects ranging from the time of the Old Kingdom to the middle of the Roman Period. There are also architectural pieces from temples and tombs.

An imposing stone bust of the great pharaoh Ramesses II presides over the room, while the world-famous Rosetta Stone, with its inscribed scripts, demonstrates how Egypt’s ancient form of pictographic writing was deciphered for the first time.

The British Museum acquired 11 wall-paintings from the tomb-chapel of a wealthy Egyptian official called Nebamun in the 1820s. Dating from about 1350 BC, they are some of the most famous works of art from Ancient Egypt.

Following a 10-year period of conservation and research, the paintings are now on display together for the first time. They give the impression of the walls of colour that would have been experienced by the ancient visitors to the tomb-chapel.

Objects dating from the same time period and a 3D animation of the tomb-chapel will help to set the tomb-chapel in context and allow visitors to experience how the finished tomb would have looked.

Death and the afterlife held particular significance and meaning for the ancient Egyptians. Complex funeral preparations and rites were thought to be needed to ensure the transition of the individual from earthly existence to immortality.

Mummification, magic and ritual are investigated through the objects on display in Rooms 62–63. These include coffins, mummies, funerary masks, portraits and other items designed to be buried with the deceased. Modern research methods such as x-rays and CT scans are used to examine the mummification process.

Rapid advances in the technology and social organisation of Egypt during the fifth millennium BC produced a material culture of increasing sophistication.

Further innovations followed in about 3100 BC when the separate Predynastic peoples of upper and lower Egypt were united under a single ruler.

The resulting increase in wealth and strong central control led to dramatic achievements in architecture, writing and fine goods, culminating in the building of the Great Pyramids of Giza in around 2600 BC.

Objects on display illustrate the cultural, technological and political development of early civilisation in Egypt throughout this period.

Ancient Nubia, the Nile Valley upstream of the First Cataract, now straddles the border between Egypt and Sudan. Rich and vibrant cultures developed in this region at the same time as Pharaonic Egypt. Among them was the earliest sub-Saharan urban culture in Africa, which was based at Kerma.

The objects on display in Room 65 illustrate these indigenous pagan, Christian and Islamic cultures and the interaction between Nubia and Egypt.

By the fourth century AD, Christianity was flourishing in both Egypt and Ethiopia. Christian Egyptians became known as the Copts (from the Greek name for Egyptians) and the church maintained strong links with its Ethiopian counterparts. Since antiquity, Ethiopia had been a major trade route, linking Egypt and the Mediterranean with India and the Far East.

The resulting history of cultural exchange and religious diversity is illustrated through objects in Room 66, which reflect the faiths and identities which coexisted in Egypt and Ethiopia.

Objects from towns, monasteries and settlements range from decorated textiles and architectural elements, to sculpture and ceramics.

The British Museum, located in the Bloomsbury area of London, United Kingdom, is a public institution dedicated to human history, art and culture. Its permanent collection numbers some 8 million works, and is among the largest and most comprehensive in existence having been widely sourced during the era of the British Empire, and documenting the story of human culture from its beginnings to the present. It’s the first national public museum in the world.

The British Museum was established in 1753, largely based on the collections of the physician and scientist Sir Hans Sloane. The museum first opened to the public on 15 January 1759, in Montagu House, on the site of the current building. Its expansion over the following two and a half centuries was largely a result of expanding British colonisation and has resulted in the creation of several branch institutions, the first being the British Museum of Natural History in South Kensington in 1881 (it is nowadays simply called the Natural History Museum).

In 1973, the British Library Act 1972 detached the library department from the British Museum, but it continued to host the now separated British Library in the same Reading Room and building as the museum until 1997. The museum is a non-departmental public body sponsored by the Department for Digital, Culture, Media and Sport, and as with all other national museums in the United Kingdom it charges no admission fee, except for loan exhibitions.

In 2013 the museum received a record 6.7 million visitors, an increase of 20% from the previous year. Popular exhibitions including “Life and Death in Pompeii and Herculaneum” and “Ice Age Art” are credited with helping fuel the increase in visitors. Plans were announced in September 2014 to recreate the entire building along with all exhibits in the video game Minecraft in conjunction with members of the public.