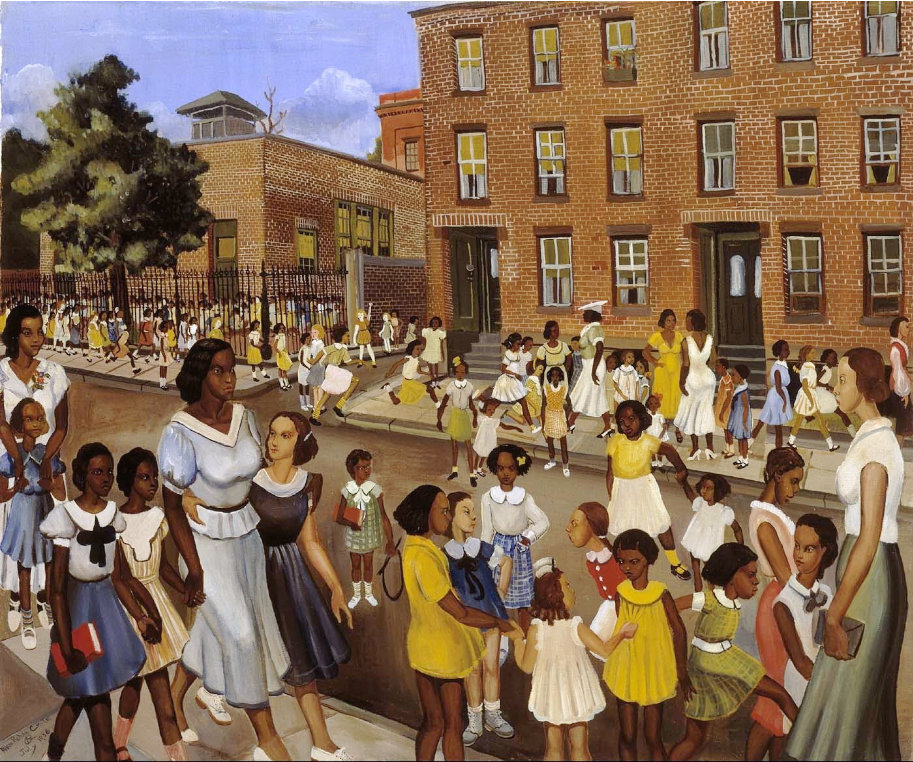 Crite’s mother, Annamae, was a poet who encouraged her son to draw He showed promise early, enrolling in the Children’s Art Centre at United South End Settlements in Boston and graduating from The English High School in 1929 Crite’s father was an doctor and engineer, one of the first black people at that time to have earned an engineering license

Accepted at Yale, he instead went to the School of the Museum of Fine Arts, from which he graduated in 1936

Crite later decided to attend Harvard Extension School, where he completed his studies, receiving an ALB in 1968 He was also awarded an honorary doctorate from Suffolk University in Boston

Crite was among the few African-Americans ever employed by the Federal Arts Project In 1940, he began a 30-year relationship with the Boston Naval Shipyard when he took a job as an engineering draftsman

During his later years, Crite both lived and worked in the Allan Rohan Crite Research Institute at 410 Columbus Avenue in Boston’s South End

He died of natural causes in his sleep at age 97

Artwork:
Crite hoped to depict the life of African-Americans living in Boston in a new and different way: as ordinary citizens or the “middle class” rather than stereotypical jazz musicians or sharecroppers Through his art, he intended to tell the story of African Americans as part of the fabric of American society and its reality By using representational style rather than modernism, Crite felt that he could more adequately “report” and capture the reality that African Americans were part of but often unaccounted for

His paintings fall into two categories: religious themes and general African-American experiences with some reviewers adding a third category for work depicting Negro spirituals Spirituals, he believed, expressed a certain humanity Crite was a devout Episcopalian, and his religion inspired many of his works His 1946 painting Madonna of the Subway is an example of a blend of genres, depicting a Black Holy Mother and baby Jesus riding Boston’s Orange Line Other pieces such as School’s Out (1936) reflect on the themes of community, family, society

His work is recognizable to the use of rich earth tone colors According to one biographer, his favorite color was “all colors” and his favorite time of year was “anything but winter” According to one reviewer, “Crite’s oils and graphics, even when restricted to black and white, are bright in tonality, fine and varied in line, extremely rhythmic, dramatic in movement, and often patterned”

Crite’s works hang in such major American art galleries as the Smithsonian, the Museum of Fine Arts, Grossman Library, the Art Institute of Chicago, and the Boston Athenaeum, to which he left a substantial collection upon his death in gratitude for his long tenure there as a visiting artist and which now holds the largest public collection of his paintings and watercolors

His works were shown in a coordinated series of posthumous exhibitions in 2007-08, at the Boston Public Library, the Boston Athenaeum, and the Museum of the National Center of Afro-American Artists

Works:
Tire Jumping in Front of My Window 1936/194 Museum of Fine Arts, Boston
Raised in Boston, Crite often painted scenes of life in the city’s South End Here, children play, lining up to jump over a rolling tire Crite had a special relationship with this spot, the otherwise ordinary corner of Dilworth and Northampton Streets:“I lived over that store for forty-six years I looked out that window, down Northampton Street towards Columbus Avenue African Methodist Episcopal Church Dilworth Street was an important phase in my life, where much of my major work as an artist was produced Today the street no longer exists It is a vacant lot The street is a memory, along with all the other vanished streets of the city”

School’s Out 1936 Smithsonian American Art Museum
Crite thought of himself as an artist-reporter whose assignment was to capture the daily lives of ordinary people His skill as an acute observer of American life is apparent in School’s Out, which shows dozens of children leaving the annex of Everett elementary school in Boston’s South End at a time when boys and girls were taught separately Although Crite acknowledged that School’s Out may reflect a romanticized view it also presents a universal statement about community, stability, and the bonds of family life