ADAMS NHP provides “an extraordinary window into the personal lives of two presidential families; early American literature, education and intellectual life; and the formation of our nation’s government.” 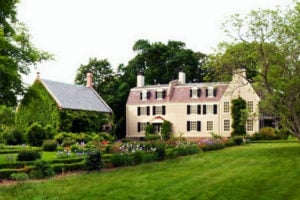 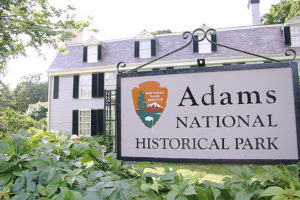 This house is a National Historic Landmark, the birthplace of John Adams. In 1720 it was purchased by Deacon John Adams, Sr., the father of the future second president. The younger Adams lived here until 1764, when he married Abigail Smith. It is a few feet from the John Quincy Adams Birthplace home, where John and Abigail Adams moved.

In 1920 Brooks Adams began arranging the furnishings and preserving the “Old House” as a historical memorial to his forefathers Presidents John Adams and John Quincy Adams. The Adams Memorial Society operated the house as a museum from 1928-1946, when at that time, they gave to the people of the United States five acres of land and five historic buildings containing the original family furnishings.

The national historical park’s eleven buildings tell the story of five generations of the Adams family (from 1720 to 1927) including Presidents, First Ladies, U.S. Ministers, historians, writers, and family members who supported and contributed to their success. In addition to Peacefield, home to four generations of the Adams family, the park’s main historic features include the John Adams Birthplace (October 30, 1735), the nearby John Quincy Adams Birthplace (July 11, 1767), and the Stone Library (built in 1870 to house the books of John Quincy Adams and believed to be the first presidential library), containing more than 14,000 historic volumes in 12 languages.

There is an off-site Visitors Center less than a mile (1.6 km) away. Regularly scheduled tours of the houses are offered in season (April 19 to November 10), by guided tour only, using a tourist trolley provided by the Park Service between sites. Access to United First Parish Church, where the Adamses worshipped and are buried, is provided by the congregation for which they ask a small donation. The church is across the street from the Visitors Center.

The house where John and Abigail Adams and their family lived during the time he was working on the Declaration of Independence and the Revolutionary War is also the 1767 birthplace of their son, John Quincy Adams. The younger Adams grew up in the home, and he and his family lived in it for a time later in life.

The Old House was originally constructed in 1731 for Leonard Vassall, a sugar planter, and was used as his summer house. The house stood empty for some time before it, along with 75 acres (30 ha), was purchased by Adams on September 23, 1787 for 600 pounds. The Adams family moved in the next year and occupied it until 1927, when it was sold to the Adams Memorial Society. The National Park Service acquired it in 1947, and has been a National Historic Site ever since.

The Stone Library, completed in 1870 on the grounds of Peacefield, houses personal papers and over 14,000 books which belonged to John Adams, John Quincy Adams, Charles Francis Adams, Henry Adams, and Brooks Adams. In his will, John Quincy Adams requested that the library be built out of stone so that it would be fireproof.

The Library holds John Adams’ copy of George Washington’s Farewell Address as well as the Mendi Bible, a bible presented to John Quincy Adams in 1841 by the freed Mendi captives who had mutinied on the schooner La Amistad and who Adams had successfully defended before the United States Supreme Court.

Henry Adams wrote his nine volume History of the United States in the library.

The church where both Presidents and their First Ladies are entombed in the Adams Crypt has never been administered by the National Park service. It is owned by the active congregation of Unitarian Universalists. In the past ten years, the congregation has used almost $2 million of its own resources to preserve the building.